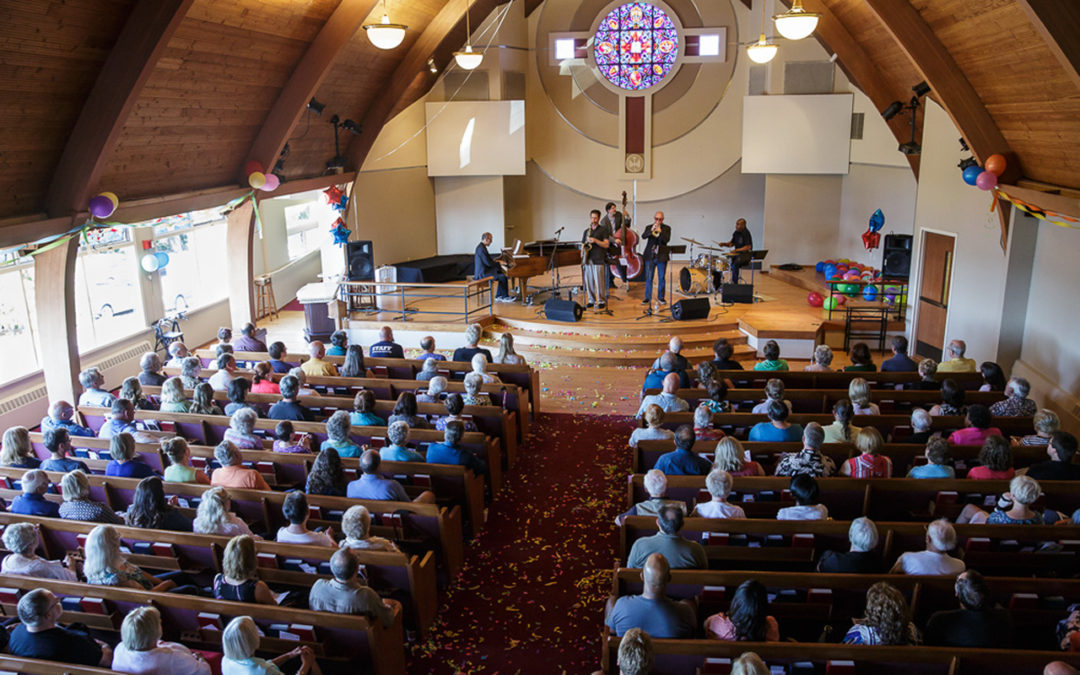 Jim Foster stands tall in his black loafers at the entrance to Marine View Presbyterian Church. At 5pm every second Sunday of the month between September and June, his broad smile beneath trim grey hair and mustache greets audiences streaming into the 335-seat modern sanctuary overlooking Puget Sound.

Inside the church, on purple carpet, the pews face east and large northern windows welcome the vista of water and trees. The high pointed barrel vault wood ceiling looks like the hull of a gigantic schooner turned upside-down. Above the altar, photographs of colorful flora are projected on hanging screens. Stained-glass windows depict white doves.

Even though the venue is a church, the music program has become very popular with the locals outside of the congregation. People affiliated with the church only account for about 20 percent of the audience.

Most of the audience prefers sitting in pews, but a few ascend the stairs at the rear to pick out one of the balcony’s 40 chairs. Depending on the date, either Rob Novasky or Dale Armstrong man the mixing board there, making sure everything sounds good.

And everything sure sounds good through the state-of-the art sound system. Regional artists like Darren Motamedy, Anton Schwartz, Jovino Santos Neto, Mel Brown, Tom Grant, and Pearl Django have all been among the growing list who have performed on the presbytery (the eastern part of a church where the altar stands).

Marine View’s Jim Foster grew up in Delaware as the youngest of four and started his musical life on trumpet. He put down his horn during college years at the University of Delaware. Now he sings. His personal preferences in jazz lean toward Spyro Gyra and Lee Ritenour but he appreciates the traditions upon which these more contemporary artists have built.

Before Jazz LIVE, Foster presented a decade of annual concerts in the park for Marine View. The free Jazz LIVE series began back in 2009. It sustains itself through donations, managing to pay artists competitive wages. Foster hopes to keep Jazz LIVE going until its tenth anniversary in 2019. This season winds up with the Johnaye Kendrick Quartet on May 15 and “Scenes” with John Stowell, Hans Teuber, Jeff Johnson, and John Bishop on June 12.

During intermission, the greeting hall fills with the smell of hot coffee wafting over a dozen overflowing plates of free cookies. Audience members flock to buy recordings from the performing artists. After the performance, several in the audience visit one of the nearby restaurants offering discounted dinners.