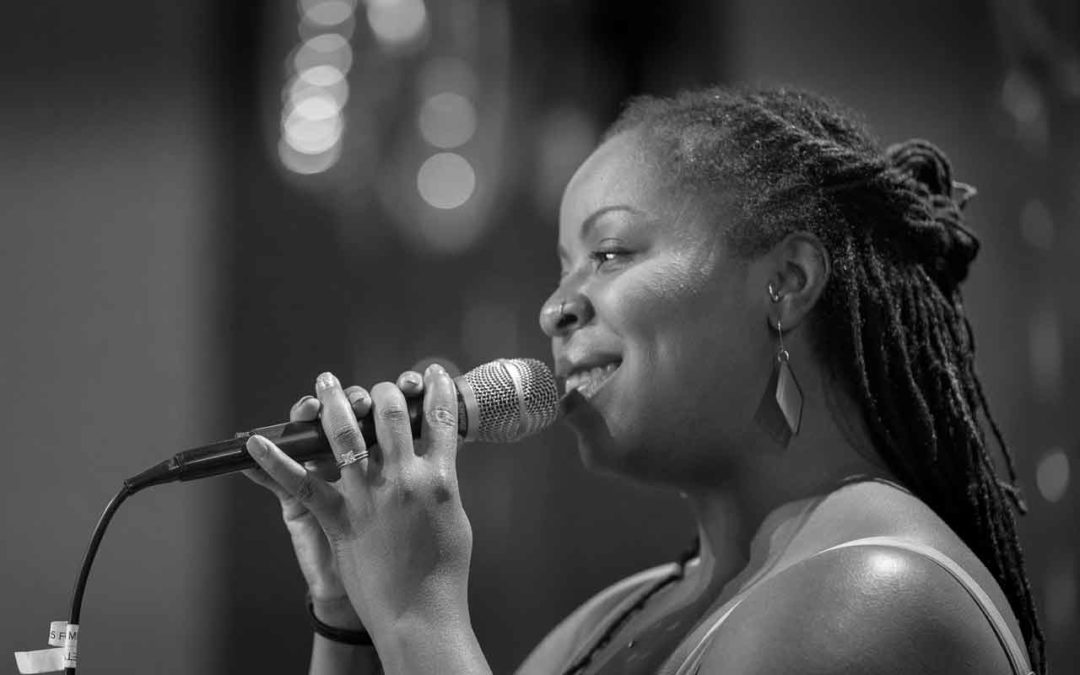 Mention the name of vocalist and composer Johnaye Kendrick to a jazz fan or musician in Seattle, and you will no doubt see their eyes brighten and a smile spread across their face.

Heavy hitters and jazz royalty such as Nicholas Payton, Terence Blanchard, and Ellis Marsalis have all championed her, and in the Pacific Northwest she’s nothing short of a local treasure. Fellow Cornish professor and collaborator Dawn Clement lays it out: “Johnaye is one of the most extraordinary musicians I have ever had the pleasure of working with. She is a true improviser, with amazing ears, an exceptional instrument, and the ability to raise the bar on any bandstand she graces.”

Kendrick’s initial gateway into music was through classical—she excelled in high school as a talented and dedicated violinist, building a strong foundation of musicianship. But her ear drew her into the jazz vocal choir, and her singing skills took off. Kendrick explains: “One of my friends gave me a cassette tape of Sarah Vaughan, and I loved it and I transcribed everything and I was singing along, but I didn’t really know what jazz was at that point.” [laughs]

Kendrick’s work ethic was strong, and her growth steady. “I loved Mariah Carey, I loved singing that kind of stuff.…there would be songs where her phrases were just so long, and that was my way of practicing, trying to sing and sustain breath support and energy to make way through the phrase along with her.… I never had voice lessons until college, so I’m a super-late bloomer, but I worked on things in my own weird way.”

Kendrick has breathtaking technical skills, but what sets her apart is her ability to pull the listener into her world with an intimacy that very few vocalists can achieve, a talent that has nothing to do with chops or genre and everything to do with humanity, positivity, and communication. It’s obvious that Kendrick feels deeply what she’s singing about, and inhabits her music with a grounded authority and authenticity that’s not easy to come by in any art form.

Kendrick’s debut album, 2014’s Here, was a well-received knockout that focused on her original compositions. This month, Kendrick releases a new album, Flying, which is an apt display of her range as both a composer and an interpreter.

Though her skill and feel for the jazz tradition is impeccable, Flying shows that Kendrick is everything a versatile and exploratory modern musician should be, with aspirations and interests that range far afield into tangential areas of soulful R&B, Latin groove, stripped-down folkish simplicity, and reimagined transformations of pop and rock.

“I really wanted to do a couple of standards, my arrangements of pop tunes that I love, but I also wanted to show my evolution as a composer. … And there’s some music on the album that I think speaks to our current climate, and I think it’s really important to release that kind of stuff in the moment.”

Flying is a finely balanced six originals and six covers, including straight-ahead scat workouts (“It Could Happen to You”), melancholy reimaginings of Nat King Cole (“The Lonely One”), originals with hypnotic grooves driving politically timely lyrics (“Never You Mind”), and a slinky New Orleans gumbo (“Scorpion”), which contrasts the dark sting of love with a bouncing groove and uplifting vocal harmonies.

The most unexpected cover on the album might be “3×5” by pop-rocker John Mayer. The track is an apt illustration of Kendrick’s openness to any source for inspiration, as long as it’s powered by a good melody. Mayer’s work might raise an eyebrow among doctrinaire purists, but Kendrick points out, “Listen, if Herbie [Hancock] signs off on you, you’re doing alright.” [laughs].

“Honestly, I don’t consider myself to be a ‘jazz’ singer, just because I’m informed by so much stuff, you know? And I don’t think this is a ‘jazz’ record,” Kendrick continues.

Our conversation turned to the effects of the #MeToo movement in the jazz world (also addressed on the title track of Flying), a turn of events whose quick impact surprised Kendrick. In her capacity as a professor at Cornish College, she acts as a committed mentor to aspiring jazz artists, and her own experiences strongly inform her current role.

“When I was younger, I didn’t know how to stand up for myself or defend myself from that. I thought if I spoke out about certain experiences, I would not be as successful. …I think I just told myself, ‘This is what you have to deal with, if you want to make it in this industry.’”

Kendrick has a prescription for seemingly unaware men who claim to not know how to handle their role in the new world:

“You need to do better. You have all of the privilege and now you want me to work harder to help you be better? You do that work. And then, go teach your boys. That’s what needs to happen!”

Johnaye Kendrick performs a Live Studio Session on August 29 at 12:15pm at  KNKX 88.5 FM. On August 31, celebrate her latest CD, Flying, with a release party at The Royal Room.