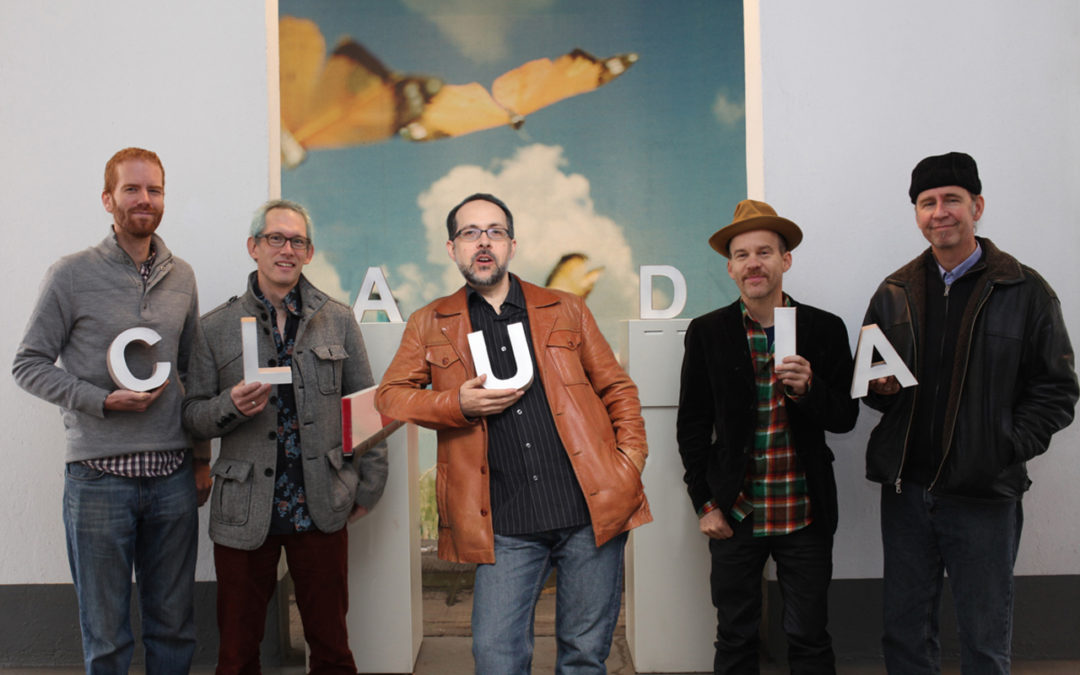 Claudia Quintet is a compelling grouping of individual stars whose music defies categorization. Hollenbeck says he has all along wanted the quintet’s sound to “explore the edge without alienating the mainstream,” as a way of showing that “genre-defying music can be for everyone.” To achieve that outcome, he has deployed knowledge of musical forms from around the world, from jazz to chamber music to varied folk forms. He orchestrates compelling, idiosyncratic, ambitious music. DownBeat wrote that he “has traveled among jazz, contemporary classical, and pan-ethnic folk music with the agility of a seasoned commuter on the New York City subway.”

In Claudia Quintet, he has ideal fellow travelers: Matt Moran is a vibraphonist with a revolutionary approach. Seattle-raised Chris Speed, who performs on clarinet and tenor saxophone, is one of the leading horn players on the New York scene (and also appears in the Earshot Spring Series with Endangered Blood). On accordion and piano is Red Wierenga, while Drew Gress and Chris Tordini alternate in the bass chair.

The Thing is the real thing, built by three towering figures in European jazz – in fact, in jazz and its progeny, anywhere: Mats Gustafsson plays multiple saxophones with live electronics; Ingebrigt Håker Flaten in on bass; and Paal Nilssen-Love is on drums of a torrential variety.

The “Scandinavian garage jazz punk” trio – “the sonic equivalent of the Hulk doing battle with Godzilla,” according to The Quietus – formed in 1999 as a Don Cherry recording project, but soon emerged as one of the most important European jazz groups, playing a variety of compositions, ranging from free jazz to the noisiest of musical invention. Gustafsson and co. took material not only from jazz innovators like Albert Ayler and Steve Lacy, but also from independent thinkers from other corners of musical free-thinking, like PJ Harvey, The White Stripes, The Stooges, Lightning Bolt, and The Ex, and they developed their sound in startling trio performances as well as in collaborations with the likes of Peter Brötzmann, Sonic Youth, David Grubbs, Pat Metheny, Arto Lindsay, Merzbow, Christian Marclay, and Neneh Cherry. We’ll hear them in all their pared, three-piece glory. “The sheer power they generate from wood, metal, breath and muscle is stunning,” gasped the BBC. And was correct.

Opening is Cortex, a leading Norwegian quartet of Thomas Johansson (trumpet), Kristoffer Berre Alberts (sax), Ola Høyer (bass), and Gard Nilssen (drums), whose “avant-garde party music” has been praised for what critics have described as the sleek, muscular propulsion of its agile and robust high-velocity improvisations and tight ensemble playing. Terje Mosnes described the quartet on Jazzinorge as “original, organic changes between striking, almost naive melodics and super complex, but yet completely logical abstractions.” You can hear that for yourself on their Soundcloud page – or, better yet, at this Earshot Spring Series show.

Here’s a not-to-miss, mesmerizing small group that breathes fresh life into the piano-trio format. With a bassist leader, it emphasizes a group dynamic ahead of featured soloing to create meditative, atmospheric, restrained yet soaring moodscapes. Joining Eilertsen on piano is Harmen Fraanje, from the Netherlands, with the bassist’s fellow Norwegian Thomas Strønen on drums. As Stuart Nicholson wrote in JazzWise, “each idea, each nuance in the music, is an instant distillation of countless possibilities shaped to the requirements of the moment” and “what emerges is often profound and always rich in meaning.” Such praise typifies critics’ responses to this riveting revelation in forward-facing jazz. The trio’s conception begins, as the BBC commented, with Eilertsen’s “agile, supportive, and warmly propulsive” sound, but that description fits his trio mates, too. Eilertsen has been a member of three ECM-associated groups: Tord Gustavsen Ensemble, the Source, and Wolfert Brederode Quartet, and recorded and performed with a host of big names including Lee Konitz and Tomasz Stanko, while also leading several outfits of his own, including Skydive Trio with guitarist Thomas T. Dahl and Rubicon, a septet. Harman Fraanje has the world’s piano music under his fingers, as he has demonstrated not only with Eilertsen, but also groups led by trumpeter Eric Vloeimans and American-Dutch saxophonist Michael Moore, and in a trio with cello grand master Ernst Reijseger. (It was Eilertsen’s 2004 album with Fraanje and Reijseger, Turanga, that announced the bassist and pianist to the world.) As for drummer Thomas Strønen, he is all over the place on the fertile Scandinavian scene, and in Food, a band with British saxophonist Iain Ballamy, and has appeared on 60 albums since emerging from the Trondheim Conservatory of Music in the late 1990s. A seasoned composer with commissions to, for example, celebrate the centenary of Edvard Grieg’s death, he has the ideal compositional sense for Eilertsen’s trio and its “fount of robust tone and singing texture” (John Kelman, All About Jazz).

Edgy, tight, thrilling, and accessible, Endangered Blood is four long-time colleagues and friends who call themselves a “neighborhood band” on the strength of living within three blocks of each other in New York. Their closeness emerges in the music as highly intuitive interplay and purpose that make Endangered Blood a highly gripping and coherent small combo. The quartet took its names from playing at a seriously ill friend’s benefit concert; from there, its health flourished. With elements from bebop, post-bop, free jazz, New Orleans funeral marches, mariachi, and much more “all seamlessly strung together” (All About Jazz), its “high-energy, melody-driven themes exploded into all-out jams, hammered home by Jim Black’s aggressive drumming,” as TimeOut NY said of one of its gigs. Speed and Black have, of course, appeared together in many bands, but of all those, said Chicago Reader, “Endangered Blood is the one where their contrasting styles flower most fully and fit together most organically.” Well more than a decade ago, drummer Jim Black established himself as one of the most inventive drummers around; in addition to Endangered Blood, he leads his own trio as well as post-rock/jazz group Alas No Axis. Bassist Trevor Dunn has featured in various Mike Patton and John Zorn projects for skills equally as honed on electric bass as on upright acoustic; among his more surprising accomplishments is to have played, with the rock band, Melvins Lite, 51 gigs in 50 states and DC in 51 days in an (apparently unsuccessfully) attempt at inclusion in the Guinness Book of World Records. Alto saxophone and bass clarinetist Oscar Noriega emerged as a member of Tim Berne’s Snakeoil quartet, plays with an inspired sense of purpose, and in Endangered Blood perfectly complements tenor saxophone and clarinetist Chris Speed, another stand-out on the current scene, playing with Craig Taborn, Uri Caine, and John Hollenbeck’s long running Claudia Quintet.