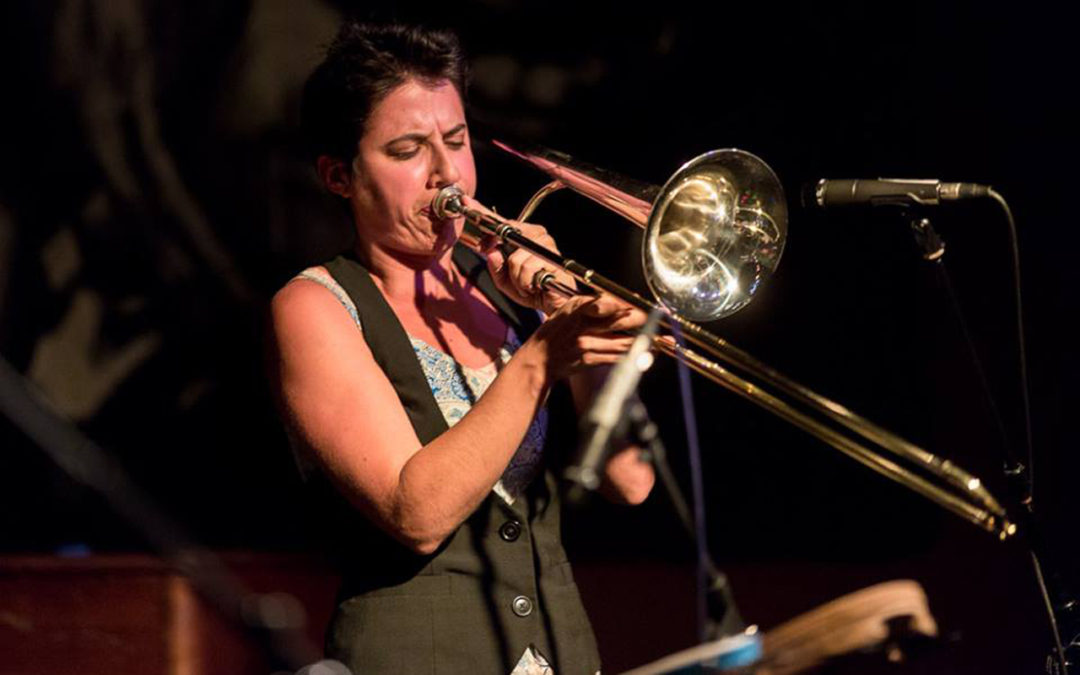 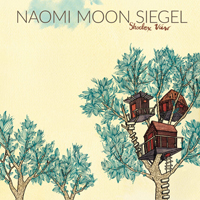 Naomi Moon Siegel is a composer and trombonist of intuitive conception and thoughtfully focused execution, whose skillful presence has graced the bandstand with a wide variety of Seattle’s most creative musicians. Sadly for the local scene, she is planning a move to Montana, but is leaving a new album, Shoebox View, as parting gift before she begins her next act.

Anchored front and center by the richly resonant and enveloping sound of Siegel’s trombone, Shoebox View is warm and welcoming post-genre mélange of trance-inducing global timbres and cinematically rustic textures. Siegel’s compositions are brought to life by a varied crew of sensitive collaborators such as drummer Eric Eagle, guitarist Sean Woolstenhulme, and Wayne Horvitz. The album manages to deftly blend uncluttered melodies, environmental sound, and varied instrumental traditions into a cohesive whole.

Though the eclectic approach on Shoebox View invokes touchstones such as producer (and former Seattle resident) Tucker Martine’s work and Jon Hassell’s “Fourth World” concepts, Siegel’s musical worlds are less quirky than Martine’s, and seem devoid of the self-consciously intellectual theorizing of Hassell’s approach. Siegel is also not concerned with overt displays of virtuosity, but with creating and inhabiting a musical space. There’s a welcome sense of openness, an almost dimensional quality to the music, as well as a centered, patient calm and connection to the rhythms of nature. Shoebox View is an aural balm that satisfies the body and soul, while still providing grit and diversion for the brain. 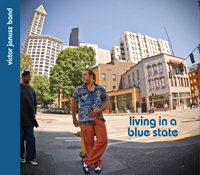 Victor Janusz has made a name for himself as a modern cabaret-style singer and skilled pianist, with a broad repertoire and a flair for the dramatic and theatrical (including a successful semi-biographical one-man show, “Hands Solo: Pianoman”). Vocally, Janusz’s richly expressive voice displays a debt to Frank Sinatra as well as obvious affinity for Elvis Costello.

On his new album Living in a Blue State, Janusz expands his music into a broader band sound with a multi-faceted group of contributors, including sterling work from saxophonist Mark Taylor and drummer Steve Banks. Janusz’s songwriting (about half the tunes are originals) is stylistically varied, and like Costello, he has a lyrical ear for storytelling.

Highlights include the unexpected harmonic turns in the album opener “French Kiss,” as well as a couple of the more stripped down numbers: “That’s All,” with Janusz’s vocals backed by the the chiming guitar of Leif Totusek, and the album’s closer, “A Song to Love” featuring just Janusz and his piano. 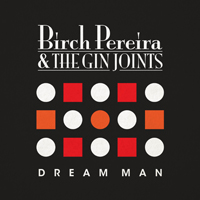 Over the years (and decades), there have been recurring cycles of popularity for many varieties of traditional country, early rock & roll, and “retro-swing,” sometimes driven as much by fashion as by sound musical intent. Birch Pereira and The Gin Joints however, are clearly not about shtick, gimmicks, or ironic detachment. This is a top-shelf unit of superb musicians, and on their new album Dream Man, they explore a keenly curated repertoire of classic sounds, steeped with an obvious affinity and love for the music.

Birch Pereira is an almost eerily versatile bassist, arranger, and singer, as seemingly at home with the electronic beats and synth textures of his band Theoretics as he is wandering the dusty roads of American vernacular music with The Gin Joints. It’s a fairly rare upright bass player who can sing great lead vocals while laying down a locked-in groove, but Pereira makes it sound easy. His high tenor is delicate but authoritative, and always in the pocket, and the stripped-down but superbly effective arrangements are spot on.

Able to blend Willie Dixon, Hank Williams, Fats Waller, and much more into a single tasty brew, The Gin Joints obviously have a distinctive skill at deftly exploring the sometimes treacherous seams between country, swing and the roadhouse, while finding the timeless essence of great songs from any era. Highly recommended.