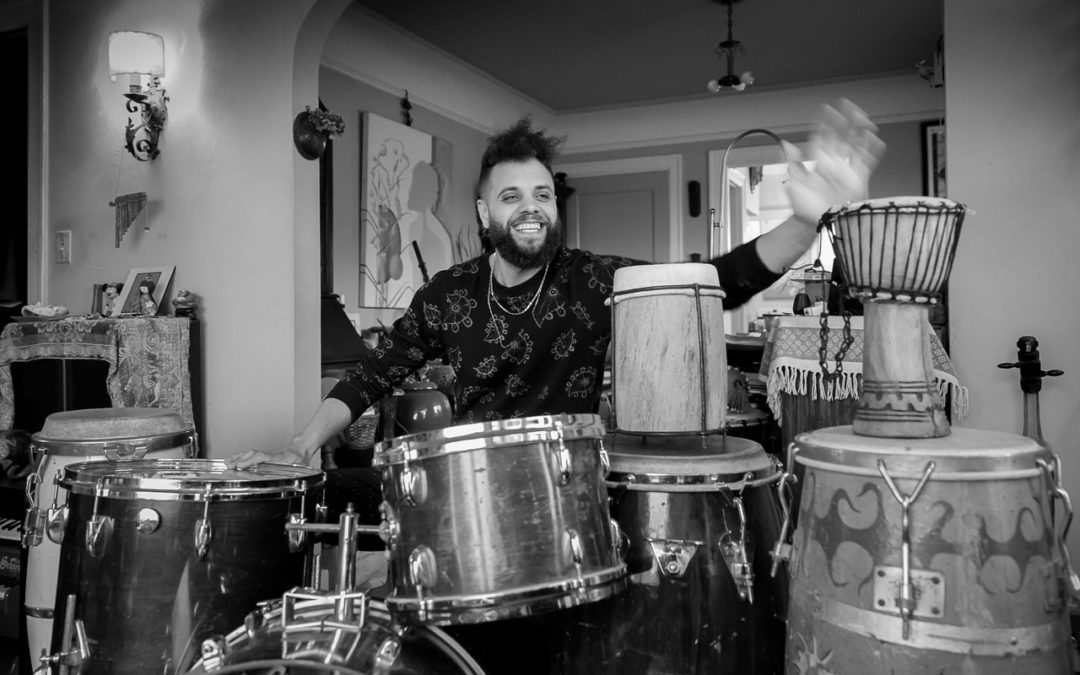 Kassa Overall is a busy man to reach.

From preparing for his own lead gig at The Blue Note, to attending other artists’ shows, to writing and arranging music, the Seattle-born, New York-based drummer, rapper, and producer is hustling as he makes his journey to full-on frontman.

“The past few months, I’d say about 90% of my time and energy has been going to booking my own shows, writing and recording music, collaborating as an artist, being a frontman,” he says. “I’m really focusing on doing my own projects; it feels like there’s never a minute off.”

Coming off a long run DJing with Jon Batiste & Stay Human, the house band on “The Late Show with Stephen Colbert,” he’s spent the last few months working on his debut record, The Blue Album, set to release later this summer. Featuring contributions from Roy Hargrove, Jon Batiste, Aaron Parks, Sullivan Fortner, Carmen Lundy, and frequent collaborator Theo Croker, the album sees Overall in a number of roles, including drummer, producer, and vocalist. The project is a reflection of the artist Overall has developed into: a multi-instrumentalist who seamlessly blurs his formal jazz education with his early passion for hip-hop and proclivity for electronica.

In support of the upcoming album, Overall hits the road this summer, including an anticipated stop in Seattle to perform at the Triple Door on July 31, with trumpeter Theo Croker, bassist Evan Flory-Barnes, and keyboardist Tim Kennedy.

“This project kind of represents a lot of where I came from and what I’m headed to,” he says. “I never played at the Triple Door before…. It’s important to come home and rewire those roots a little.”

The Seattle native and graduate of Garfield High School grew up in a musical household, surrounded by instruments including a drum set, piano, saxophones, and even an early beat machine that he remembers playing with from an early age.

“I almost took it for granted,” says Overall on his musical surroundings. “I thought that’s just how people grew up. Some kids had Legos, we had drum sets.”

With music their natural pursuit, Overall and his brother, who fell into saxophone, started gigging around the area at a young age, including playing at Northwest Folklife. At Washington Middle School, he was taught by Seattle legend Larry Jones, who “really opened my eyes to the whole world of drumming and jazz,” he says. Between lessons, gigs, and finding inspiration in his parents’ extensive vinyl collection, which included old jazz and world music records, Overall’s musical identity began to take shape.

At the same time, however, hip-hop was becoming more and more pervasive in American culture, and Overall found inspiration listening to DJ Jazzy Jeff, N.W.A., Snoop Dogg, and others. The musical dissonance between his jazz upbringing and hip-hop interests manifested into somewhat of an artistic identity crisis.

“I’d make beats and write raps and hang out with friends in my basement, then take jazz lessons and drum,” he says. “It was two very separate worlds.”

The separation continued as he went to Oberlin College, where he studied drums with Billy Hart. As he became more immersed in the jazz scene, Overall would keep making beats and raps in his dorm room on the side. “I didn’t really know how to bring those things together, how to bring electronics to a production level, bring that to the jazz world in general,” he says.

After graduating from Oberlin, Overall made his way back to Seattle, where he continued to gig with local icons like Marc Seales, Phil Sparks, Clarence Acox, and Robert Knatt: “countless people that have shaped me as a player,” he says. Eventually, however, he felt a nudge from his mentors to move away from Seattle and see what else was out there for him. “I had nothing to lose, I could go,” he says. “I’m forever grateful to all those people.”

It’s been 12 years since Overall moved to New York City, and in that time he has performed with an immense roster of artists, including Christian McBride, Donald Byrd, Vijay Iyer, Dee Dee Bridgewater, Terri Lyne Carrington, Marc Ribot, and Ravi Coltrane. He was a key member of the late pianist Geri Allen’s band, and appears regularly with vocalist Carmen Lundy and trumpeter Theo Croker, even co-producing the latter’s 2016 album Escape Velocity.

This past June, he headlined at famed venue The Blue Note with a new project called “Blue Swamini,” a tribute to Alice Coltrane and Geri Allen, featuring Joel M. Ross on vibes, Brandee Younger on harp, and Linda Oh on bass. On August 2, following his Triple Door performance, Overall returns to NYC to play at the Jazz Gallery with Vijay Iyer, Ravi Coltrane, and Evan Flory-Barnes.

Aside from his upbringing and the musicians he’s worked with, Overall says he also draws inspiration from artists like the poet Rumi, the philosopher Seneca, and the spiritual figure Yogananda.

“I’m finding the same principles and ideas presented in different forms,” he says. “This idea of universal philosophy, it tends to make my chest feel tingly.”

“Once you started vibing that feeling from poetry or music or people,” he adds, “you can almost learn how to tune into it. I’m really trying to learn how to develop an awareness of that, especially when practicing drums…if I can play drums and feel that feeling, then it means that I’m tapping into some of these ideas and principles via sound.”

It’s taken him some time, but Overall is finally at a point in his career where he’s comfortable combining the genres that have inspired him since the beginning.

“Now I’m in a place to use both [jazz and hip-hop], hoping to make people think differently about music these days,” he says. “I’m grateful that both of those trees were able to grown on their own and develop strong roots and then reconnect at the top…. At this point it’s kinda like, here I am, here is what I have to offer, organize how you see fit.”

The Kassa Overall Trio with Theo Croker performs at the Triple Door on Tuesday, July 31, 7:30pm. Tickets are $15 and available at tripledoor.net.