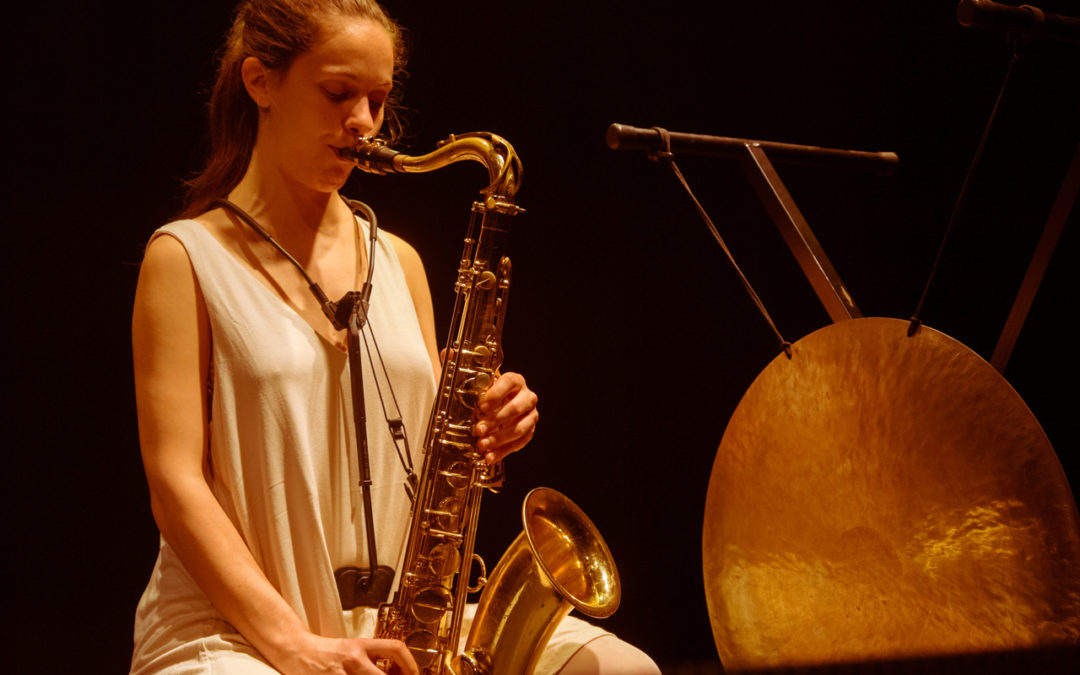 María Grand, one of the most exciting young voices to emerge from New York in recent years, makes her first appearance in Seattle this month with her solo performance Persephone/HerStory.

Of Swiss and Argentine descent, Grand, 26, is a tenor saxophonist, composer, and singer. She has performed with a wide array of musical luminaries, including Nicole Mitchell, Vijay Iyer, Craig Taborn, Mary Halvorson, Chris Potter, Jen Shyu, Aaron Parks, Fay Victor, Rajna Swaminathan and Joel Ross. Her sound is deeply embedded within the jazz tradition, with a fullness and subtlety that radiates emotion, empathy, and strength that carries us into new sonic territories. Her music is of the rare type that invites listeners to challenge their deepest held assumptions, interrogate where they are complicit within ongoing abuses of power, and ultimately move towards personal healing through the shared experience of music.

The trajectory of Grand’s projects is expansive in the scope of her conceptual undertakings, as well as ever deepening into the depths of her personal voice and sound. With her first two albums, TetraWind and Magdalena, Grand pursues an expression of personal and relational balance—both in music and in life—by symbolically harnessing natural elements, ancient Egyptian and Christian mythology, and the healing qualities of feminine psyche/the sacred feminine in ensemble formats. With Persephone/HerStory Grand takes a turn inward, moving from ensemble formats to a more experimental and intimate solo performance. While still drawing from myth and ritual—this time with the story of the Greek goddess Persephone—the nature of her solo performance suggests that it is also more overtly autobiographical than its predecessors.

Devised with Grand’s creative partner, writer and visual artist Satya Celeste, Persephone/HerStory is a creative retelling of the myth of Persephone, as performed by Grand.

The story of Persephone’s betrayal, rape, and castigation is well known, but Grand’s performance offers a new, more universal telling that raises the question of why descriptions of Persephone’s experience always depict her as passive. Indeed, our portrayal of Persephone is ever-couched between the stories of the male gods Zeus, Hades, and Poseidon. Grand, instead of recasting the morals of the myth learned through their infidelity, violence, and attempts to mend past treacheries, focuses on what we might learn by listening to HerStory. Through her embodiment of the goddess, Grand provides a space to acknowledge the Persephone’s living in the here-and-now, in our personal lives and communities.

Grand’s Persephone provides answers at a time when all people, regardless of gender and sexual orientation, are coming to terms with the way the societal construction of gender roles and power dynamics have caused pain and suffering on the most intimate, subconscious, structural and interpersonal levels. Men, in particular would do themselves justice to attend this performance, because so often in addressing and healing the inflictions of our patriarchal society, the most needed and least taken step is simply to listen. Jazz and creative music affords us a beautiful medium to do just that, and here we have a unique opportunity to address conflict and healing head on by putting HerStory front and center.

Make no mistake: as much as Grand’s work operates in the subconscious realms of human experience, it also sends deep ripples to the structures of jazz’s very culture and power structure. This month marks the one-year anniversary of the founding of the We Have Voice collective, an intersectional and intergenerational collective co-founded by Grand along with 13 other female and non-binary jazz and experimental musicians. A direct response to the #MeToo movement in jazz, their expressed mission, presented in an open letter and Code of Conduct, is to promote “safe(r) work places within the performing arts,” with an emphasis on expelling sexual harassment and discrimination from a culture that includes bandleaders and bandmembers, curators, journalists, educators, promoters, managers, and various music institutions and organizations. In a New York Times article Grand said, “The idea is to propose solutions, and also open the conversation to go further…How do we change this culture? And not just in the dynamic of victims denouncing perpetrators, because that puts the victims at a lot of risk. What we’re trying to do is change the cultural mind-set so that people know what to do when they suspect or see abuse.”

Grand’s work all circles back to the healing power of sound, of telling our respective individual stories with all of the joy, pain, and vulnerability attached, and working to build a better world from that intimacy. Join her along with the rest of the Earshot community on April 23.–Carlos Snaider

This performance is supported by The Selvage Fund. Tickets sliding scale $15/$10/$5. Advance tickets available at earshot.org.