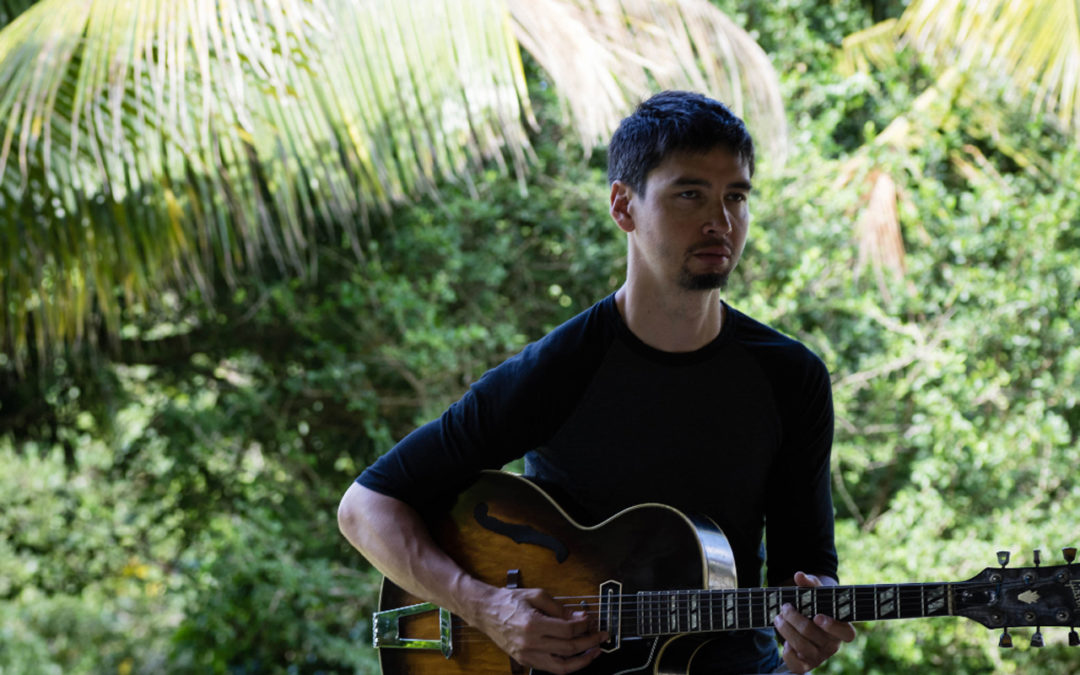 It figures that guitarist Miles Okazaki would one day embrace the age-old storytelling device of the “trickster.”

He grew up in Port Townsend, near where Indigenous people of the Salish Sea revere Raven, who in the guise of a child stole the light of the world from within a nest of boxes. That legend inspired several compositions that Okazaki recorded with his Trickster quartet on its 2017 self-titled debut. Here in Seattle, he will be with two of the band’s original members, and his colleagues from Steve Coleman’s powerful outfit—bassist Anthony Tidd and drummer Sean Rickman, along with piano star Matt Mitchell.

Upon its release, Trickster (then with pianist Craig Taborn) made the Los Angeles Times’s best-of-2017 list, and DownBeat and JazzTimes both sang its praises, too. Unusually for a jazz album —or any kind of album—its cohesion as “a true concept album” (Wall Street Journal) carried the day. Okazaki had been inspired by reading Trickster Makes This World, Lewis Hyde’s celebrated 1998 study of the unpredictable scoundrel tricksters who, as reviewer Michael Dirda put it in The Washington Post, emerge and reemerge in diverse cultures as “gods of mischief, who are also the gods of artistic and cultural renewal.”

Many cultures have produced mythology relating to tricksters like Raven. In ancient Greece, Hermes revealed the knack of making fire. In West Africa, Eshu connived that a drunkard would create the world. In some Native America lore, Coyote more helpfully revealed how to shoot arrows and catch salmon. The tricksters and ancient archetypes of helpful waywardness, in Okazaki’s understanding, use “mischief and magic to disrupt the state of things, breaking taboos and conventions, opening doorways.” They are “storytellers and improvisers.” Okazaki wrote compositions whose qualities would evoke recurring trickster themes such as mischief, disguise, paradox, chaos, and illusion but also the restoration of balance.

So, for example, in the Raven-related “Box in a Box,” he conjured up the unboxing of boxes within boxes with symmetrical melodies, rotating tetrachords, a shifting bassline, and an illusory drum figure, all tucked into a deceptively conventional-sounding musical framework.

The approach worked on Trickster. The New York Times called it “an expression of deep, systemic intrigue.”

Okazaki has since taken on other slippery musical challenges, most notably a 2018 recording, Work: The Complete Compositions of Thelonious Monk for guitar. On solo guitar he performed his transcriptions of the 70 known Monk piano compositions. He used simply a guitar and an amp—no effects, no overdubs, no fixes, no reharmonizing. Nate Chinen for WBGO called the monumental work “an act of immersive scholarship and exhaustive scope” and “a singular achievement.”

With Trickster, Okazaki deploys far different resources. Tidd and Rickman share his delight in the kind of funk, R&B, and hip hop-fueled pulse that they and Okazaki injected into Steve Coleman’s Five Elements during hundreds of performances. Pianist Matt Mitchell, much celebrated for his own projects as well as his contributions to Tim Berne’s Snakeoil and the Dave Douglas Quintet, has become “an indispensable fixture of the contemporary vanguard” (New York Times).

With musicians like that in his quartet, Okazaki says, “it’s a waste of their abilities for me to be trying to have too much control and be trying to tell them what to do. The fun of it and the creative portion of it is allowing it to open up.”

Playing in Seattle is something of a homecoming for Okazaki, who became hooked on jazz by attending Port Townsend’s Centrum jazz festival. At Harvard University and then Manhattan School of Music, he gigged all the while. In 2005 he placed second in the Thelonious Monk International Jazz Competition, and his career blossomed in the company of mainstream artists like vocalist Jane Monheit and pianist Kenny Barron as well as experimentalists like Steve Coleman, Mary Halvorson, and John Zorn.

His albums as a leader—Mirror (2006), Generations (2009), and Figurations, a New York Times top-10 jazz album of 2012—have been “slowly evolving puzzles of brilliant jazz logic,” as the Times’s Ben Ratliff wrote of the last. Okazaki has emerged as a thoughtful guitar theorist (as evidenced by his 2015 book Fundamentals of Guitar) as well as, to quote Steve Coleman, “a very intense cat.”–Peter Monaghan