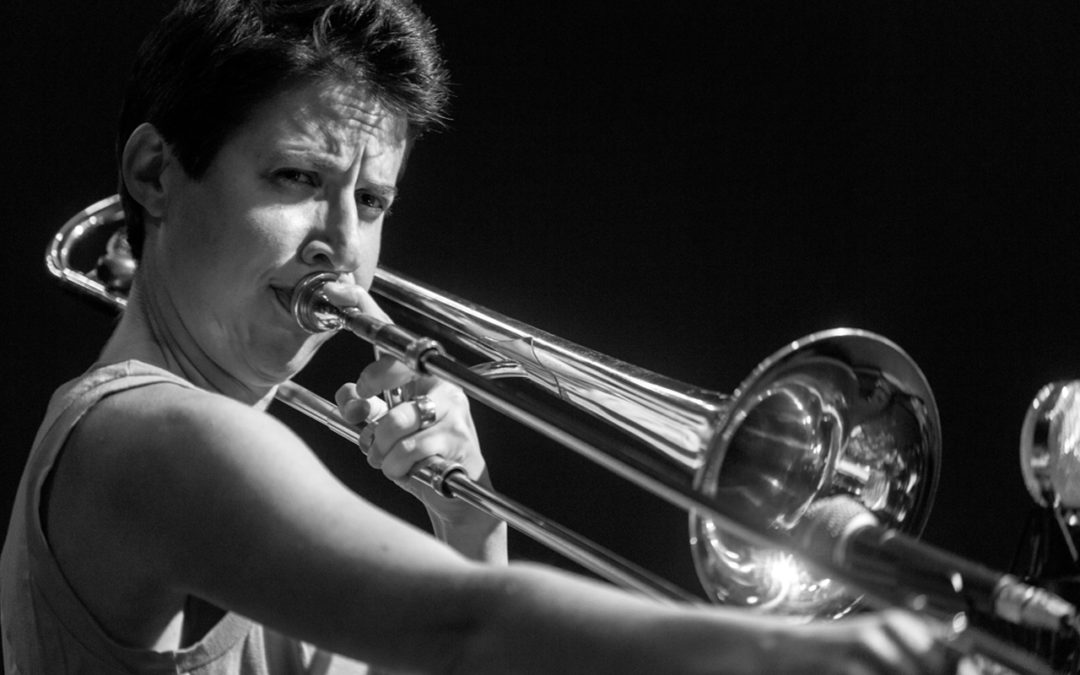 Many in Seattle’s jazz community were surprised to hear that the multi-talented trombonist Naomi Moon Siegel was moving to Montana (the Rattlesnake area of Missoula, to be specific). What? That seems even farther from New York than Seattle!

“My partner and I wanted to find a smaller community, a slower paced lifestyle more integrated with nature,” Siegel explains. “In Missoula you’re right in it. And I have some family there. But I love Seattle and it’s definitely hard to leave.”

Born in western Massachusetts and raised in Chicago, Siegel moved to Seattle in 2008, after living in Oakland for two years, where she had taught at the Stanford Jazz Workshop. “I didn’t know anything about Seattle,” she confesses, “I just followed a friend here.”

She immediately got involved with the music education scene, helping to run Seattle Music Partners, working in four Central Area schools. At the time, she was not playing her trombone, due to difficulties with her hands.

“My hands needed rest, so I tried the Alexander technique,” she says. Many musicians are familiar with the method, which focuses on overworked muscles, relaxing them and developing direction from the mind, rather than pre-set muscular procedures when playing the instrument.
Siegel developed other new approaches to playing her trombone. “I pay attention so the playing is not impactful, using the mind, and then the body following suit,” she says.

She has also studied yoga more seriously, with its attendant meditation practice. This past December, she finished a one-year yoga teacher training. Siegel says that both practices have helped change her playing.

“It’s in the way I approach the instrument,” she explains. “The way I practice now is from a place of curiosity rather than the place of only seeking results. Physically, the trombone is taxing. I’m not a big person and it takes a ton of air. The new practice has helped me to extend techniques and sounds.”

As a young woman in the active, competitive jazz scene, she has come to focus on a sharing approach. “Before, I felt like I’ve got to show these people I can play,” she comments. “Now I ask how I can be more connected to myself and to other people when I am playing.”

She also began composing her own work, mostly while traveling away to be in sunny places, and in nature.

“Often songs are written when I am in motion or walking,” she says. Much of her writing has been done on a beach in Costa Rica over four trips visiting her brother and a young nephew, as well as on trips to Senegal and The Gambia in West Africa where she studied the kora, a 21-string lute harp.

Siegel first traveled to Africa on a high school music exchange, where her group played at a South African rural school. “When I took out my trombone, the women especially cheered for me,” she recalls.

She continued an interest in African music and dance, and shortly after arriving in Seattle, met Senegalese musician Thione Diop and played with his ensemble monthly at the Triple Door.

An eclectic, productive, and versatile musician, Siegel is a talented bandleader, as with her group Sunchaser, and coveted ensemble player, as in the Royal Room Collective Ensemble. In 2012, she received the Golden Ear Award for Emerging Artist.

However, she felt her path as a musician was “not nourishing.”

“Performing my music live once or twice here and there did not feel like I was able to bring the music to a real fruition,” she says. And so, she turned to composing her own work for a new recording, Shoebox View, released a few months ago.

“I have a practice to write something every day for a month,” she says. “Sometimes something flows, the instrumentation or just a snippet based on a line or a melodic idea. Sometimes it’s banging my head against a wall. And some ideas come back to me from years before. I have notebooks full of snippets.”

These notebooks served as the inspiration for the title of her album Shoebox View; as she brought out each notebook, she would remember “the specific time, place, and people I was with when I wrote it, like a shoebox full of memories, pictures, and letters.” In it, she chose songs and hired specific musicians, such as guitarist Sean Woolstenhulme and drummer Eric Eagle, for each.

Siegel also is working on a new album and a music education project for Syrinx Effect, a band she developed with soprano saxophonist Kate Olson, to explore electronic improvisation. The two started playing together after meeting at Café Racer in 2009.

Syrinx Effect released their Snail Songs EP back in 2014, and recently received funds from 4Culture to do workshops for elementary through college-age students.

“This coincides with work on our album, A Sky You Could Strike A Match On, which will be unique in its aural texture,” says Olson. “We hope to create a sonic environment that surprises and moves listeners.”

Noted jazz musician Wayne Horvitz said of his inclusion of Siegel in his Royal Room Collective Ensemble: “She has great rhythmic feel and ideas, and isn’t afraid to use traditional language, but she has modern language too.” He says straight-ahead jazz is changing because of the inclusion of more women players.

Horvitz thinks Siegel’s music has a simplicity that is not shared by other jazz composers.

“The music she loves is not just jazz,” he adds. “It is all sorts of groove-oriented world music. I think we have a lot more in store from her.”

Indeed, Seattle audiences will have the opportunity hear Siegel when she appears at the Earshot Jazz Festival on October 18 at the Seattle Art Museum. “I will be featuring the people on the album so this will be the chance to get a lot of musicians together,” she said.

In the meantime, she is setting up her recording studio in Missoula, working with musicians remotely, editing and producing. “It has challenges but also has its own spaciousness,” she says. “As I get more into this recording, my ear is getting better.”

Siegel says she’s been called lately to bring feminism to the jazz realm.

“I want to tell stories that need to be told, especially in mainstream music education,” she says. “Stories about women in jazz and music history, stories about the positive cultural aspects that feminism can bring to jazz instead of the over-masculinized culture that it is sometimes, but also my own experiences as a woman musician. I once had a protective façade in order to play trombone. Then, in Seattle, I was able to find a more vibrant expression of myself.”

← Catching Up With: Paul Rucker’s Interactive Activism Letter From the Director →