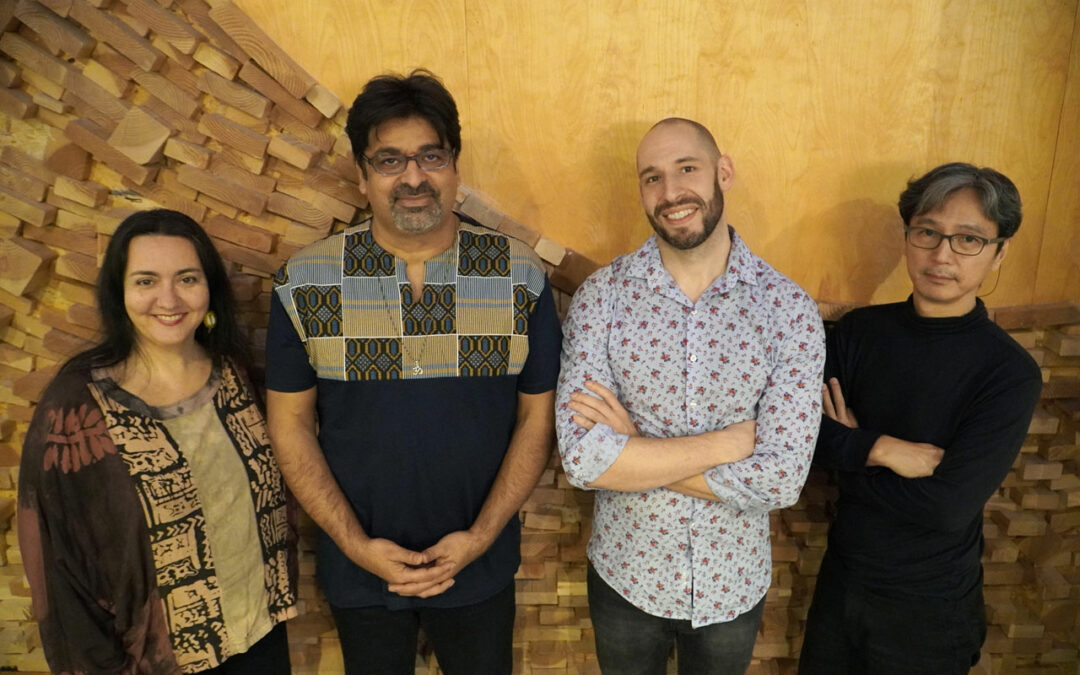 Guitarist Rez Abbasi and sitarist Josh Feinberg are ready to step into new and uncertain worlds, challenging notions of musical essentialism while inviting audiences to surrender to discoveries in the present. The two celebrated string players will be gracing Seattle’s Town Hall Forum with their new quartet Naya Baaz, meaning “New Bird” in Urdu, in what promises to be an altogether novel and timely hybrid musical project.

Word of a new quartet featuring guitar, sitar, five-string cello (Jennifer Vincent), and drum set (Ernie Adams) may conjure up the thought of the many hybrid musical projects that sought to blend the improvisatory thrusts of jazz and Indian classical music. While certainly generative and important models in the progression of creative music, the differences between the two systems of music are difficult to overcome. The results are often a co-existence of sorts, each system reifying their respective characteristics. “To ask a classical musician of any sort, let alone one from a tradition like that of India’s, to stretch themselves out of their wheelhouse usually doesn’t work,” said Abbasi. “But jazz musicians have been doing that for centuries…Josh actually studied jazz for several years, plays acoustic bass and took lessons with Paul Bley, and he’s also been a serious student of sitar for two decades. With those ingredients I just had a feeling it’d be a meeting in the middle and worth everyone’s time if we did a collaboration.”

Abbasi, a 2021 Guggenheim Fellow, stands firmly rooted in the lineage of 6-stringers and with a particular deft for gorgeous melodicism, often while simultaneously challenging sonic assumptions. His recent projects include Django-Shift, a truly creative reworking of the compositions of Django Reinhart and “Unfiltered Universe,” a sextet featuring musical luminaries Vijay Iyer, Rudresh Mahanthappa, and Dan Weiss. Vincent’s background as a jazz bassist, applied to the cello, combined with Adams’ multi-faceted approach to drums and percussion, rounds out the group’s ability to foray into musical textures ranging from chamber-like to those more characteristic of the standard jazz quartet.

So many of the operative processes in jazz and creative music involve hybridity: an incessant cycle of learning and unlearning from different systems and viewpoints. Interpreted broadly, Abbasi’s words about the collaboration are perhaps also words of guidance: “This is a true hybrid from the bottom-up, not a jam session between cultures or a Western artist sitting in with an Indian group and vice versa…we needed to take it conceptually further.” Tickets and details at earshot.org.