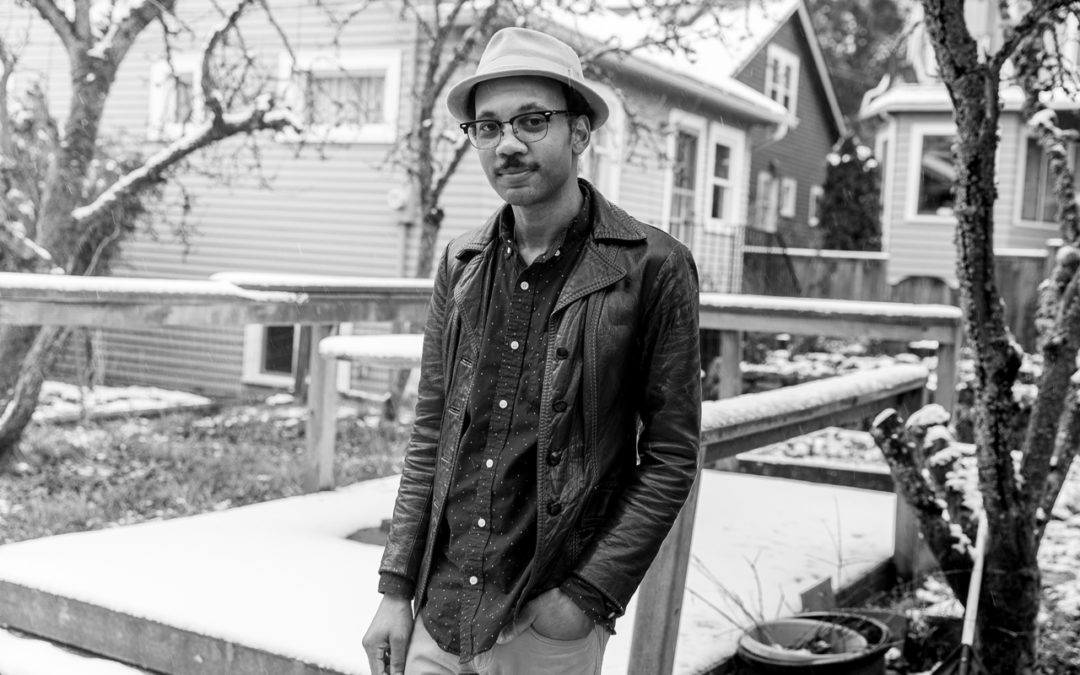 Noel Brass Jr. is a genuine practitioner of true sponta­neous creation. He is a key­boardist and humble purist, whose tireless dedication to the art of impermanent in­spiration has bestowed him with a remarkable sense of improvisational patience. “I’m kind of starting off sketching, or molding clay, building little musical monuments almost, tone poems, architecture,” says Brass in reference to his cre­ative process. This patient building is on full display throughout Brass’ soul­ful and contemplative solo exploration Broken Cloud Orchestra (Wax Thema­tique 2017), an outstand­ing achievement in acces­sible ambience and spiritual minimalism.

Sparse synthesized mo­tifs are delicately draped over a tasteful reverberat­ing Fender Rhodes, evok­ing imagery of a somber soundscape on a foreign plan­et. Meditative premonitions slowly morph, breathe, and are allowed time to grow before they are meticulously sculpted and sketched into existence. “The element of what I want to bring is that transformative, kind of other­worldly improvisation,” explains Brass. “Where you feel like you’re getting it from a different source…being open, being patient, not rushing your ideas. Like the paint strokes. That’s why I like ambient movements. It doesn’t have to be a grandiose statement all the time: it can just be a feeling, transporting you somewhere else. There’s a lot of differ­ent planets; why not visit a bunch?” Hailing from the Midwest, Noel Brass Jr. grew up in the suburban city of Joliet, Illinois, 40 miles southwest of Chicago. Growing up in a middle class, Baptist, pro-union family ex­posed young Noel early and often to a wide array of exceptional music. At home, Duke Ellington, Gabor Szabo, and Nat King Cole were a com­mon source of familial entertainment, and a mainstay of dinnertime accompaniment.

At the same time, other less-than-conventional sounds were also on the radar of the budding musician. “I listened to lots of punk and jazz,” says Brass. “Hip-hop and new wave, every­thing was given a listen.” Early on Brass began to hone his craft and grow his ears, embrac­ing his aptitude for im­provisational perfor­mance and composition. In 2004, Brass took a train from Chicago to Seattle. Curious to check out a new city and a new scene, he hit the ground running, and within a few months assembled the psychedelic jazz trio Af­rocop. A weekly Saturday night gig at the small Ballard pub The Step­ping Stone, allowed Brass—along with founding bassist Quintin Mus­grove and drummer Justin Hills—to build a strong musical foundation. Shortly after Afrocop’s inception, Brass met current drummer (and now longtime collaborator and co-conspir­ator) Andy Sells, through a Seattle Drum School gig substitute service.

“Once I met Andy though, it kind of changed the dynamic and structure, because Andy had been playing in the city for years, and I didn’t know too many people that were already invested in the city. And that to me was a big deal, because I needed that kind of backing to push forward and come up with better ideas,” says Brass.

The weekly gig challenged the group as individuals and shaped them as a unit. “Every Saturday, we would play all night. And you have to come up with a shit ton of ideas when you are improvising all night, especially if you don’t have any heads or anything. We were just coming up with stuff, and I always thought that’s where I wanted to push the band.”

With the addition of Carlos Tullos on bass and baritone guitar in 2011, Brass began to reach out and explore what he refers to as ‘psychedelic gospel leanings’, and the group began to take on a more intentional approach.

While traveling through the often murky waters of spur-of-the-moment composition, Brass and company developed a unique mantra, a life jacket of sorts. “We call it an open soul policy,” declares Brass. “That is kind of what Afrocop is about. We keep it that way, just so if someone runs out of ideas, you can leave the band, if someone else has ideas, come sit in with us. Not everybody gets that idea. It’s very democratic, it’s for people who have ideas. But it’s not just like, here, let me come in and play a bunch of solos.”

The “open soul policy” also serves as an optimistic attempt to keep the music fresh, honest and uninhibited by ego. It is a clever approach to the inevitable loss of free flowing creativity. While enacted to encourage a spirit of constant creative manifestation, in the end it all boils down to communication and trust.

“There’s limitations to everything, right?” asks Brass. “Sometimes communication is key: you have to work together at all times. Even if you’re going in a place where it’s unfamiliar, we’re all traveling in that same realm. A lot of times we have to just carry on, even though you get into weird moments of sound, and the vibe is almost spookier: you can’t explain it, it’s just strange, surreal almost. You’re uncovering, excavating almost, and then you see further truths that you don’t even know about,” muses Brass.

“That’s the beauty I guess, and the scary part of it: you’re just traveling along until different things shift you to say otherwise. That can be a challenge, to listen, and staying connected to the overall themes.”

The aural soundscapes being teased out in real-time at Afrocop’s hypnotic live performances are often complemented through visual landscapes that play off of the sonic themes created by live visual artist blazinspace. Afrocop and blazinspace’s collaborations have been explored at venues ranging from Vito’s to Lofi to a recent appearance at the Timbre Room as part of the Earshot Jazz Festival’s DJ Series.

As a leader, Brass embraces the challenges and the connectivity that comes from sustained improvisation, resulting in the communal building of ideas. “Overall, I see more benefits if you give someone a skeleton of chords. That way you’re working between those ideas, but if you know the habits of each other, as [Afrocop has] been playing together for a long time, you become more fine-tuned and more of a moving machine together, rather than sluggish pieces on their own. And those individual sounds and those individual voices from the trio really get to shine. Not just in solos, but working together for the greater purpose.”