Skerik: A Hint of Revolution 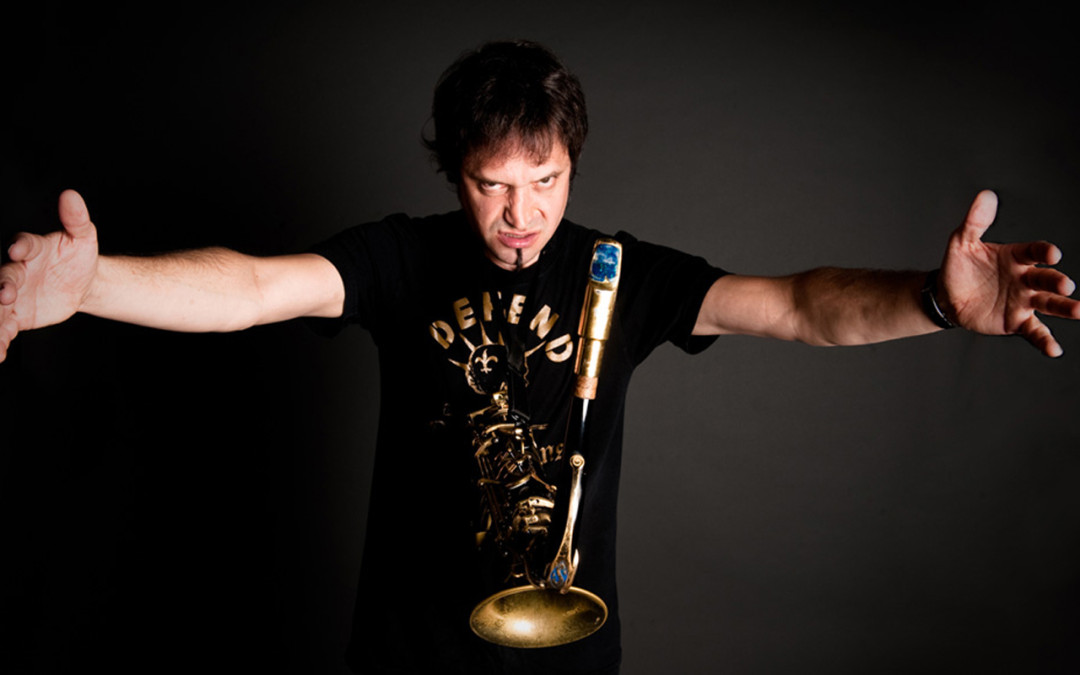 “One of the biggest differences between contemporary jazz musicians and the people that created this music – Thelonious Monk, Charlie Parker, and people like that – is that the contemporary people aren’t rebelling against anything. There’s not even a hint, or a concept, of revolution.”

Within minutes of arriving at Skerik’s backyard studio, my orderly plans for a linear interview were pretty much out the window. Seattle’s “Dark Lord of the Saxophone,” a longtime local icon (and 2003 Earshot Jazz Northwest Jazz Instrumentalist of the Year) had quickly veered off into a broad swath of topics, from musical rebellion to what’s missing in today’s jazz education.

Skerik is as thoughtful a talker as he is a player. His opinion is that learning jazz has degenerated into insular stylistic imitation, an overemphasis on technique and a lack of context about the ideas behind the music. He feels strongly that young musicians should not study the modern players first. It’s important to get back to the original sources, and it shouldn’t be hard:

“I don’t get it – the information is so readily available. Listen to interviews with Charles Mingus, read things written by Eddie Harris or Yusef Lateef. They’re telling you all about it right there! I don’t understand how you could spend so much time learning how to mimic someone and stop there, and not want to know who that person was, and why they’re doing what they’re doing.”

Skerik puts the focus on life experience to inform the music. For an artist who has developed his sound and concepts over many years of travel, gigging, and hard work across the U.S. and around the globe, he is in a position to speak from experience. A purely scholastic environment leaves out some real learning opportunities.

“Charlie Hunter calls it the ‘jazz arms race.’ Just building up all this knowledge that has no context … Study the world, study art; it will affect your music. There’s a lot of things to study in life that are not music, but that will have profound effects upon your music.”

Skerik also points to the importance of having a philosophy and a concept, something beyond mere virtuosity.

On the topic of Seattle’s music scene, Skerik feels the energy has ratcheted up, pointing to the presence of Wayne Horvitz, Bill Frisell, and Cuong Vu as catalysts.

“When the University of Washington hires someone like that [Cuong Vu], it’s like a magnet, so these kids come here to study, and then they’re available to play in the community, so you start seeing them start their own groups. Then they’re little soldiers, available for other people’s concepts too … Seattle never had that before.”

But that doesn’t mean it’s easy to form deep connections in a band-development sense. That kind of work takes time.

“I’m a real band person. I’m not like a Wayne Horvitz or a Bill Frisell or [John] Zorn, where I can just say, ‘OK, I have this idea, I’m going to write all the music, and here it is.’ I wish I was [laughs], it would make things a lot easier. But I really thrive off the group interaction of group creation – getting into the rehearsal room and writing stuff together … People are too busy these days, they just don’t want to invest in that.”

Ongoing bands aside, Skerik has no trouble staying busy. This year’s Earshot Jazz Festival performances include a solo set opening for The Westerlies as well as an ongoing collaboration with Jacob Fred Jazz Odyssey, and he just finished a tour with his group Bandalabra (featuring Andy Coe, Evan Flory-Barnes, and D’Vonne Lewis).  Upcoming dates include Omaha Diner, reimagining the Top-40 canon (“If it didn’t make it to #1, we don’t play it”) with Charlie Hunter, Steve Bernstein, and Bobby Previte, and DRKWAV, a trio with Adam Deitch and John Medeski.

Despite his reservations about the modern jazz education industry, Skerik is, like many of the best musicians, a perpetual student: Always practicing, always open to whatever person or activity will help his art evolve.

“The ‘playing with people that are better than you’ thing can be great … I’ve been real lucky that the local musicians have let me play with them, like the Bandalabra guys  … Playing with Wayne Horvitz and Hans Teuber, they’re all like teachers of mine, mentors.”

← Billy Strayhorn, Who Made Ellington Far Greater Letter from the Director →