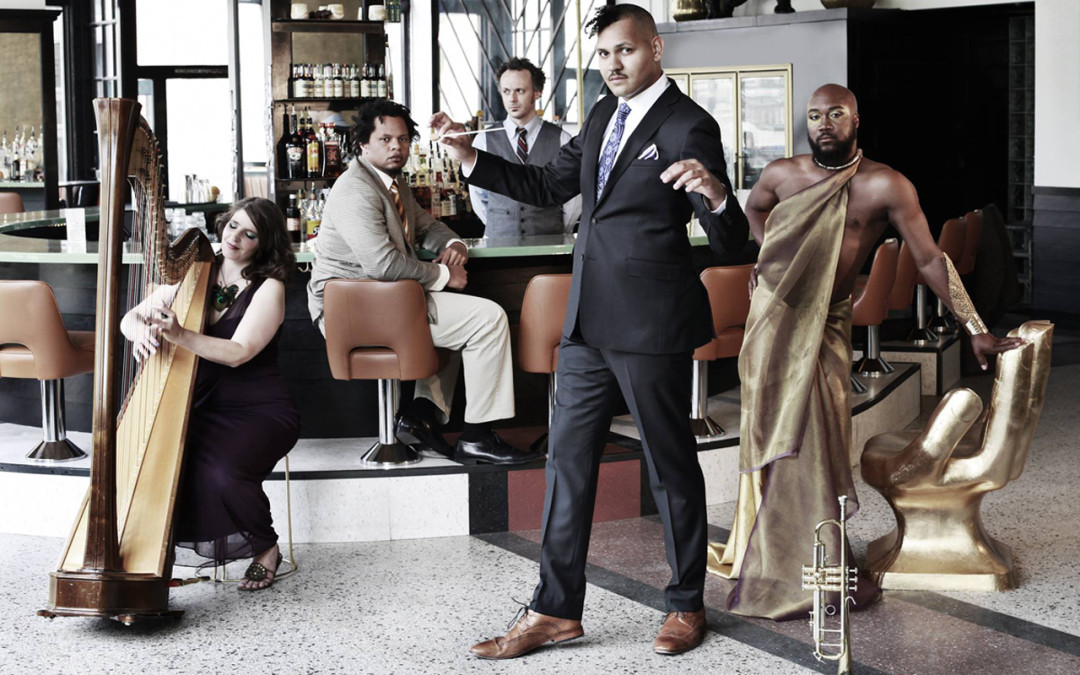 Seattle-based composer, comedian, and trumpeter Ahamefule J. Oluo pioneers the combination of stand-up comedy and orchestral performance in his grandscale experimental opera Now I’m Fine. Trumpet player for renowned garage-jazz quartet Industrial Revelation and first Artist–in–Residence at Town Hall in Seattle, Oluo returns home with rave reviews from a successful run of his show in New York earlier this year. His epic music and collection of darkly witty personal stories can be experienced at the Moore Theatre for two nights, April 2–3, at 8pm.

The musical memoir features dramatic stand-up bits that Oluo originally thought up separate from his music. Finding his material addressing a singular situation of unfortunate events of his early adulthood, Oluo asked himself how his music and humor could work together. In merging two seemingly unrelated art forms, Oluo has innovated a unified hybrid production of modern opera.

“The story element of both the music and stand-up spoke to the same thing within me,” he says. While this cohesion was natural for Oluo because of his impressive skill sets, it seems no other artist has yet to connect the dots as he has.

“I like this form, but I don’t know of anyone else doing what I do,” he says.

“I was always afraid of anything music and comedy because I loved them both so much,” Oluo adds. “I questioned my motivations in combining them. I found that it genuinely worked for them to build off each other and improve each other.”

Clear to any witness of Oluo’s creative niche, it is not because of his ego or inadequacies in either realm of comedy or musicianship that the artist combines his abilities.

“I’m going to do it again because it works,” he assures. “If you find an opportunity to bring something to the world, you almost have an obligation to do it.”

Oluo composed the majority of Now I’m Fine within a six-month period of time, arranging the music for a large ensemble in following months. Oluo originally wrote for a 10-piece ensemble; however, his instrumentation had to be extended for the ensemble to be able to meet the physical demands of his music.
A staple in the Seattle music scene his entire adult life, Oluo had already established a talented network of artistic connections by the time he cast his 17-piece orchestra, which includes a spectacular company of performers including Okanomodé Soulchilde, Samantha Boshnack, Josh Rawlings, Evan Flory-Barnes, D’Vonne Lewis, and more.

“Now I’m Fine is very much modern music, requiring flexibility and stamina…and musicianship to play the really difficult music,” says Oluo, adding: “The temperament within the group is quite good; these are people I’ve really enjoyed working with over the last 16 years. They can handle the personal investment required, and when traveling with that many people, personality matters. There is love shared within the group.”

An example of sheer talent and self-teaching, Oluo developed the extraordinary music of Now I’m Fine fueled by a near-fatal bout with an autoimmune disease and despair from divorce and loss of his father whom he had never met. He found musical inspiration from his regeneration and his own internal audio.

“I would be hearing French horn lines – specifically my friend Josiah’s horn lines,” Oluo says. “If I’m hearing something, I’d write it down.”

Nearly 300 pages in its original form, the original manuscript of Now I’m Fine was completed on paper all by the work of Oluo’s pencil. He then worked with violist and copyist Brianna Atwell to evolve his compositions into distributable music.

“It’s good to ask for help,” says the composer, thanking his tubist Jon Hansen (DMA) for  filling in gaps on horn charts, and bassist Evan Flory–Barnes for his string arrangements.

“I became somewhat self-conscious about writing string arrangements under my own comedy bits, and I asked Evan to reconstruct the backing music,” explains Oluo. “With the restraints to reimagine the music of the show, Evan analyzed the situation and provided incredible support to it, [as] bass players do… We didn’t leave the universe of the show.”

In his spirit of collaboration, Oluo requested that vocalist Okanomodé Soulchilde bring some of his own lyrics to the stage. “His lyrics are one of my favorite things about the show,” Oluo compliments the acclaimed singer. “[His lyrics express that] maybe the show means something different for him than it does for me.”

The vulnerable opera-comedy was recorded as an album in 2014, and the group has since performed it over 10 times, with a six-night run this past January at New York’s Public Theater.

“If I didn’t absolutely love doing this show and working with these people, it would be my nightmare,” he jokes. “I dread sound check. I dread staging. I dread fundraising….I put all of myself into this show because it has to be beautiful to make it worth it.”

In contrast to the element of commerce that was required for his New York performances, Oluo’s Seattle shows will be driven by his desire to have a real effect on the lives of his Seattle audience members.

“That connection with the audience is a thing that keeps me alive. The show is put together in a very organic way,” Oluo says in a promotional video by STG. “If you want to connect with the most people, you don’t do it by going more broad. You do it by getting more personal, by getting more specific. You make it more about them by making it more about you.”

At the beginning of this year Oluo was announced winner of a Creative Capital Grant, which he’ll use as a motivator to begin working on a second storytelling production. Complementing stories of Oluo’s more recent past featured in Now I’m Fine, Oluo expresses interest in writing a show that takes an honest look at his mother’s life.

Oluo wants to bring the issues of race and women’s body image onto the stage, and he would like to see more shows about women’s lives.

While Oluo may take up this challenge himself in the near future, it is Now I’m Fine – a tour de force of ground-breaking entertainment so relevant and tangibly earnest – that should be anticipated.

Tickets for Now I’m Fine are $30 and available online. Use the code EARSHOT when you purchase tickets at stgpresents.org/groups/earshot and a portion of your purchase will go directly to Earshot Jazz as a donation.