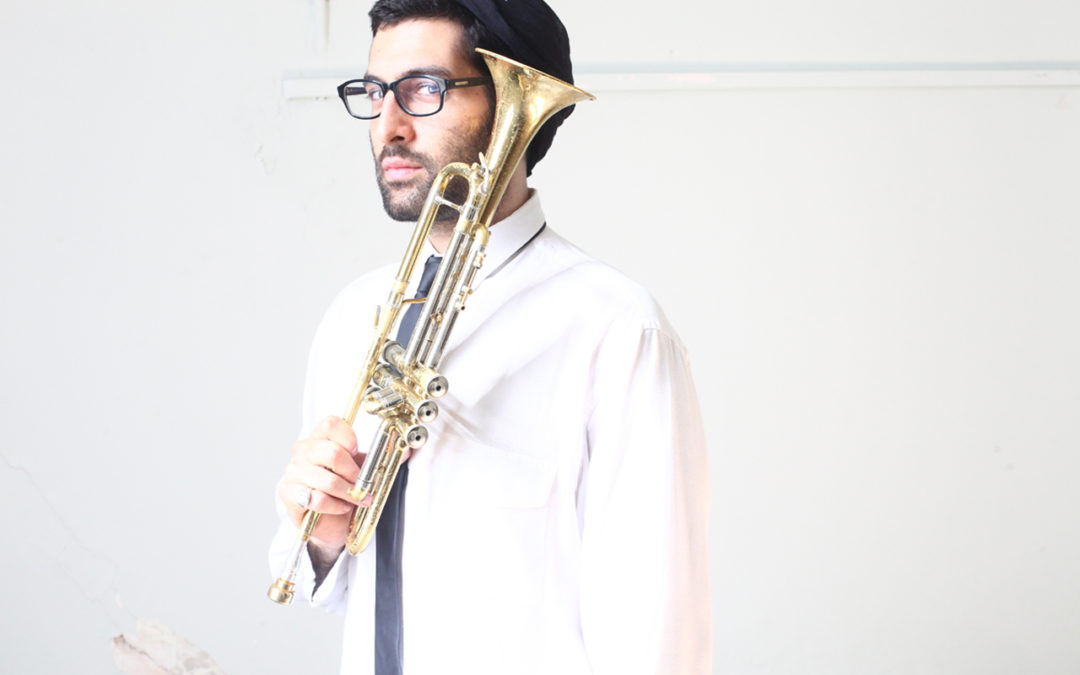 Now based in New York City, Itamar Borochov came to the United States from the integrated Israeli city of Jaffa, known for its vibrant spice markets and long-standing cultural influence in the Middle East. Donning a Hamsa medallion around his neck, his music provides a soundscape for the meeting of East and West. Thoroughly entrenched in the jazz tradition, his dark tones blend Arab and pan-African sensibilities. He is one of the several prominent Israeli jazz artists setting the scene in New York and around Europe.

A veteran of the group Yemen Blues, Borochov also has chops in rock, classical, and tonight’s mainstream jazz. Borochov just released his new album Boomerang, written in Paris and on the beaches of Miami, this month.

Jazz in its second century is increasingly exciting in its mission to positively challenge exactly what it is and can be. Pianist and film composer Kris Bowers has never been afraid to step outside any genre’s traditional boundaries to create other evolutions of music. This rich and eclectic sensibility is evident from the very first notes of his compositions, as well as his own playing; as a result, his skill and musicianship has been sought after by the likes of Aretha Franklin, Marcus Miller, José James, Ludacris, Christian Rich, Jay Z, and Kanye West. For this performance, Bowers teams up with artist Christian Hannon, a New York-based digital artist who has merged his interests in art and technology into an audio-visual experience called projection mapping. Paired with live music, Hannon projects his own moving images onto 3D sculptures to create an exceptional concert experience, which Hannon himself has likened to “playing light,” similarly to how one might play music.

Opening the evening is CMD, a multidisciplinary collective orchestrated by saxophonist Ivan Arteaga and digital musician Marcin Pączkowski, both long-standing pillars of the local improvisational scene. Standing for “Computers, Music, and Dance,” CMD includes Greg Sinibaldi on baritone sax, Chris Icasiano on drums, and dancer Allison Burke. Using accelerometer sensors worn by the musicians that detect motion and send signals back to Pączkowski’s computer, the group performs compelling graphic scores that are emotive and unafraid to envelop the spaces in which they are performed.

Cuban bassist Feliciano Arango and his siblings Eugenio (percussion), Ignacio (guitar), and Cristina (vocals), of Guanabacoa, Cuba, combine the driving percussion, joyful vocals, Afro-Cuban folklore, and native costumes of their homeland with a version of funk jazz that creates an ecstatic merger of art forms that cannot help but inspire movement.

As Tomas Peña wrote in the journal Jazz de la Pena, Los Hermanos Arango plays “with an insuperable rhythmical strength and a harmonic richness.” They produce a musical moment that imbues the jazz genre with a flavor both new and very, very old.

Since their creation in 2003, they have built an international reputation at festivals and concerts like the Montreaux Jazz Festival, the North Sea Jazz Festival, and Lincoln Center in New York. Sharing the stage with notable artists like Jane Bunnett, Hermeto Pascoal, Diane Schuur, Billy Cobham, Marcus Miller, and Steps Ahead, they have proven themselves as musical world citizens.

The show opens with Seattle’s own Cuban band sensation Clave Gringa, led by Ann Reynolds. Herself a passionate student of Cuban music, she composes new pieces that fuse a palette of Cuban styles with American jazz into a sound that also invites the audience to move.

Trombonist Naomi Moon Siegel has become a solidly appreciated educator and performer in Seattle’s vibrant music scene since moving here in 2008. So much so, that the announcement of her recent move to Montana caused ripples of surprise, sadness, and genuine support through the community.

A versatile and productive player around the Pacific Northwest, Siegel was known for her own Sun Chaser band, the Syrinx Effect duo she developed with soprano sax player Kate Olson, and an impressive list of globally oriented large ensembles playing African and Latin music. She received the Golden Ear Award for Emerging Artist in 2012 and has been solid part of Wayne Horvitz’s Royal Room Collective Ensemble. She is constantly working on new recording and music-education projects.

The brilliant trumpeter from Kobe, Japan, is one of the more exciting new soul-jazz figures emerging from a resurgence of the legendary Blue Note Records label. Takuya Kuroda came to America to study at Boston’s Berklee College of Music and the New School for Jazz and Contemporary Music. He graduated from the prestigious program in 2006, and in the decade since, he has been crafting his sound in New York City with the likes of Junior Mance, José James, Akoya Afrobeat, and Greg Tardy.

Kuroda’s 2014 release, Rising Son, was produced by José James (whose vocals are featured on the Roy Ayers composition “Everybody Loves the Sunshine”). His brand-new recording Zigzagger further seasons his signature soul-jazz and post-bop sound with liberal elements of hip-hop and contemporary culture.

Chicago-based cellist Lonberg-Holm has played and studied music from the Juilliard School to the gutter. He’s a former student of Anthony Braxton, Morton Feldman, Bunita Marcus and Pauline Oliveros, leads his primary projects Valentine Trio and The Lightbox Orchestra, and is a member of many ongoing collective projects and infrequently convening ensembles. He’s worked with Joe McPhee, Peter Brotzmann, Ken Vandermark, Wilbert DeJoode, Torsten Muller, Michael Zerang, and others.

This drummer-less trio’s stark gestures and focused intention are stripped-of-artifice to reveal a depth-of-mutual-engagement, that can stimulate our own inward journey. Maybe that reflection lends a strengthened goodwill that will serve us all outside the rare moments in the atmospherically fit Chapel Performance Space.

Reimagining Parker’s iconic bebop through an Indian raga, avant-garde lens all his own, Mahanthappa loosely bases each composition of Bird Calls on one of Parker’s songs or solos. The attentive ear will catch the ensemble’s reconfigurations of certain melodies and harmonies – the most explicit being a recognizable seven-note sequence of “Parker’s Mood”– but should far from expect a conventional tribute.

Mahanthappa is a revered confluence of culture, an astonishing soloist and jazz composer who has never limited himself by those descriptors. He has lead seven projects and worked extensively alongside pianist Vijay Iyer and drum legend Jack DeJohnette. Praised past projects have included a marriage of Indian classical music with an electric funk, plugged-in prog lineup. In 2013, the fusion maestro joined microtonalist guitarist David Fiuczynski to craft the bicultural music of Gamak, an album that dwells in the cracks between notes of the western scale, and was admirably compared to both Mahavishnu Orchestra and The Stooges (Los Angeles Times).

Tonight, we are pleased to present this re-scheduled performance of the critically acclaimed Transylvanian Concert by the remarkable pianist Lucian Ban and the legendary violist Mat Maneri.

Born in Romania, pianist and composer Lucian Ban began his classical piano and composition training at the age of seven. He studied at the Bucharest Music Academy before moving to New York in 1998 to study at the New School. In New York, he met Brooklyn-born violinist/violist and leading jazz innovator Mat Maneri.

Maneri, who has performed with Cecil Taylor, Joe Morris, Gerald Cleaver, John Lockwood, and more, was only five when he began studying the violin. He was later given full scholarship as the principal violinist at Walnut Hill High School to the New England Conservatory of Music.
Transylvanian Concert, which derives influences from jazz and European chamber music, is largely comprised of compositions by Ban which range from ballads to blues to a the traditional spiritual “Nobody Knows The Trouble I’ve Seen.”

All About Jazz praised the original live recording, released on ECM, it for its “unanticipated beauty,” calling it “vulnerable but ultimately revelatory.” The Guardian gave Transylvanian Concert four stars, calling it “a set of sometimes brooding and rather clandestine music” that “has its own kind of melancholy beauty, and plenty of wayward exuberance.”

Pianist Bill Anschell, on the cusp of the release of his new CD, celebrates with two nights of performances with his quartet of Brian Monroney, guitar, Chris Symer, bass, and Brad Boal, drums.

Seattlelites should count themselves lucky to possess an artist of this caliber in their town. Originally hailing from the Emerald City, Anschell was away from Seattle for 25 years. Lured right out of school into what Anschell himself calls the life of a “jazz vagabond,” he became drawn to Atlanta, where he served as Jazz Coordinator of the Southern Arts Federation and created “JazzSouth,” an internationally syndicated radio show.

His performance career took off in Atlanta, where his trio played at major festivals, including the 1996 Summer Olympic Games, The Montreux Atlanta Festival, and four extensive tours of South America. After forming a musical partnership with vocalist Nnenna Freelon, they, too, enjoyed several international festivals and European tours.

Anschell has played with jazz greats including Ron Carter, Benny Golson, and Russell Malone, and is the recipient of numerous Gold Ear Awards. Many of his compositions have appeared on television programs including “The West Wing,” “The Wire,” and the PBS movie The Old Settler.

His last three CDs all made JazzWeek’s national “Top 50” chart, and his 2009 collaboration with saxophonist Brent Jensen was described by Cadence as “startlingly beautiful, surprising, and powerful.”

All About Jazz has nothing but praise for Grammy-nominated pianist and composer Manuel Valera: “His sound is fresh, inviting and evocative,” it proclaims, and brings “a vitality and newness to the idioms of jazz and Latin jazz.”

With more critically acclaimed CDs than fingers on his hand, Valera is always blending styles and forms that mix elements of jazz, R&B, fusion, and funk with the tastes of his beloved Cuba.

Awarded grants for composition from Chamber Music America’s New Jazz Works and the ASCAP Young Jazz Composer Award, and having performed in festivals and concerts in over 30 countries, Manuel is much sought after as both a composer and a performer.

Don’t miss him with his trio, E.J. Strickland, “technically brilliant and forward-thinking” (All About Jazz) drummer and Hans Glawischnig, first-call New York bassist.

A monstrously masterful drummer and a ubiquitous presence in a multitude of bands around the Pacific Northwest, D’Vonne Lewis is this year’s Earshot Jazz Festival Resident Artist. This evening’s concert is a special homecoming of sorts: Lewis graduated from Roosevelt High School in 2002, and will be a featured guest (and inspirational presence) with this year’s edition of the band. During his time at the school, Lewis received a slew of awards, including Outstanding Drum Soloist winner at the Essentially Ellington Festival at Lincoln Center for the years 2000, 2001, and 2002.

The Roosevelt High School Jazz Band, under the direction of Scott Brown who has led the group for more than 30 years, is one of the premier high school ensembles in the country. A hard-swinging unit that can outpace many of the nation’s college bands, Roosevelt has competed in the finals at Essentially Ellington 16 times, and has won first place three times. As director Scott Brown says: “We’re going to have a great band this year!” With D’Vonne Lewis kicking and pushing the group, the night’s music is guaranteed to be beyond great.

The show will also feature another one of Lewis’ exciting projects, the D’Vonne Lewis Limited Edition. The band offers up hard-driving grooves and spectacular musicianship shaped and propelled by a stellar band: the muscular saxophone of Cliff Colón, deep groove from Dean Schmidt on bass, Jacques Willis’ versatile voice on vibraphone and the masterful Eric Verlinde on piano.