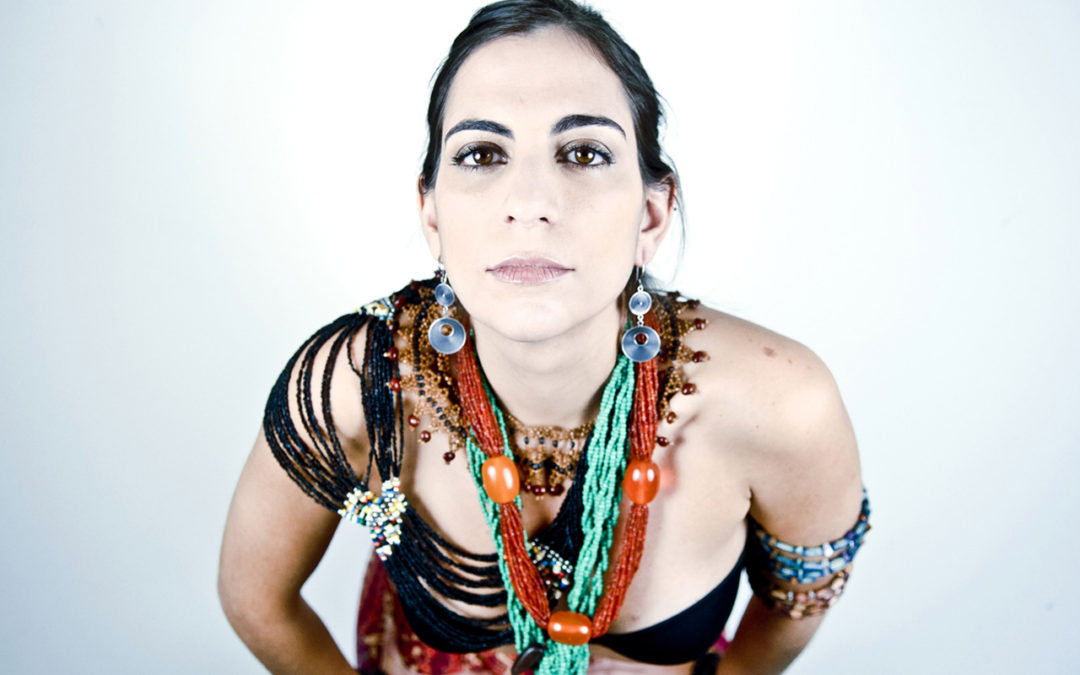 With beautiful clear tones, strong and evocative of many places in South America, the Buenos Aires vocalist and songwriter Sofia Rei does not stick with traditional instrumentation; she has a way with electronic modernism too. Now based in New York, she recently collaborated with John Zorn, and has worked with Bobby McFerrin, the Klezmatics, Pedrito Martinez, and Geoffrey Keezer, with whom she collaborated on a Grammy-nominated album. Rei also teaches at Berklee College of Music and the New England Conservatory. Her most recent album, De Tierra Y Oro, spans jazz, world music, and contemporary rhythms, which she describes as her “philosophical wanderings.” Here, she performs with Jorge Roeder (bass) and Tupac Mantilla (drums).

Opening the night, accomplished former Seattleite and trumpeter/composer Josh Deutsch, a regular in Sofia Rei’s touring group, showcases his own Pannonia, with violinist Zach Brock, trombonist Ryan Keberle, bassist Gary Wang, and percussionist Ronen Itzik, and Rei as guest narrator/vocals. Tonight, they perform “traditional folk music from an imaginary place” and present the West Coast premiere of The Road to Pannonia, a trilogy that brings the mythology of Pannonia to life. Deutsch has performed around the country as a sideman and bandleader. He recently performed with Latin Grammy-winning extraordinaire Lila Downs at the Montreal Jazz Festival. He is also a jazz educator, teaching and playing at the University of Oregon summer jazz camp, and co-runs The Queens Jazz OverGround.

“If you want to know what is important to a people, listen to their music….”

Jaimeo Brown is a nimble and versatile drummer and conceptualist, with a committed to a fertile convergence of collaboration, education, political activism and nuanced aesthetic expression. He has collaborated with artists as varied as Stevie Wonder, Carlos Santana, Q-Tip, and Pharoah Sanders.

Aided by partner Chris Sholar’s malleable guitar work and Jaleel Shaw’s blazing saxophone, Jaimeo Brown Transcendence has collected raves from across the globe for their latest album, the bracingly original Work Songs. The music juxtaposes field recordings and influences ranging from J Dilla to Bernard Purdie to John Coltrane, which Brown deploys to advance his own fresh take on jazz, Afrofuturism and the global village–an effort to “use history, art and technology to inspire and advance culture.”

Simultaneously experimental and uncompromising yet warmly accessible, the music of Jaimeo Brown Transcendence is both a riveting reflection and a vital counterbalance for today’s complex and often troubling world.

The Boston Globe calls him “The Key Master.” And having already toured the world and played on such stages as the Kennedy Center, Carnegie Hall, Birdland, and festivals too numerous to count, 24-year-old Matt Savage is indeed a master.

Savage’s professional jazz career started at the age of 10 and has involved music-making with Chick Corea, The Ellington All Stars, Chaka Khan, Wynton Marsalis, John Pizzarelli, and more. Famed tenor sax player Jimmy Heath says that Savage is “the future of JAZZ.” With 11 recordings under his belt, he also lays claim to being a Bösendorfer piano artist, which puts him on the same roster as piano greats Quincy Jones, Vladimir Ashkenazy, and even Franz Liszt.

A prolific composer, he wrote the majority of the music on his albums, much of which has been used commercially. He also scored the music for the full-length documentary film, Sound of Redemption: The Frank Morgan Story.

Diagnosed with autism as a child, Savage involves himself in fundraising and advocacy efforts like Autism Speaks’ “Light Up the Blues” concert event in Hollywood, and dedicates a portion of his time to teaching at a school for children and adults with autism and other developmental disabilities.

Closing the evening are local legends-in-the-making Dawn Clement and Mark Taylor, who parse their celebrated LineUp! ensemble down to piano-sax duo.

According to NPR, “Of the young guitarists on New York’s jazz scene, few are as highly tipped as Matthew Stevens,” who brings his trio to The Royal Room stage for two intimate, rocking shows at this year’s festival.

Born in Toronto in 1982, one of Stevens’ earliest influences was Seattle’s own Jimi Hendrix. After graduating from Berklee College of Music in 2004, Stevens began to show up everywhere, as an essential element of the important new work by strong young artists like Christian Scott, Terri Lyne Carrington, Kendrick Scott, and, notably, Esperanza Spalding, in whose Emily’s D+Evolution project Stevens is key.

His playing has been met with critical acclaim. He was placed in the Rising Star Guitar Category of the 63rd Annual DownBeat Critics Poll and his performances have been lauded in DownBeat Magazine, NPR, JazzTimes, Billboard, the New York Times, and more.

In 2015, he released his debut album as a bandleader under Whirlwind Recordings. Titled Woodwork, it received positive reviews from DownBeat Magazine, All About Jazz, and more, and was described as “an amalgamation of modern jazz and neo-fusion elements which showcase…sonic versatility and savvy producing chops” in LA Weekly. Its iTunes feature review praises Stevens’ “immense melodic gifts and deceptively intricate playing.”

Vocalist Denise Donatelli has an impressive resume of recordings and award wins/nominations. Her last three recordings were nominated for Grammys in the Best Vocal Jazz Album category. In 2012, she was voted Jazz Vocalist of the Year by the Los Angeles Jazz Society and has been featured in the DownBeat Critics Poll as a Rising Jazz Vocalist for the last four years. After establishing herself as a musician to be reckoned with on the Atlanta scene, she moved to Los Angeles, where she has worked ever since. Her confidence, slightly smoky tone, and rhythmic sensibility remind one of vocalists Diana Krall, Ella Fitzgerald, and Carmen McRae.

The “virtually impossible to resist” (Buffalo News) saxophonist, composer, and educator Anton Schwartz, who splits his time between Seattle and the Bay Area, performs regularly up and down the West Coast.

STG Presents Bill Frisell “When You Wish Upon a Star”

It’s hard to imagine a more disarmingly authentic major artist than Bill Frisell. It is also kind of refreshing to know that a distinctive individual, like Bill, can continue to unveil new artistic output, with remarkable collaborators all around the world – especially on an instrument as ubiquitous as the guitar – and retain the purity and heart of his own artistic identity. It is entirely right that Bill Frisell should live here in Seattle. We’re happy to call him a friend, and pleased to join STG in presenting music from his recent recording, When You Wish Upon a Star.

Born in Baltimore and raised in Colorado, Frisell studied music at both the University of Northern Colorado and Berklee College of Music. His first big break came when Pat Metheny recommended him for a recording session that he was unable to attend. Following that successful session, Frisell became an in-house guitar player for prestigious ECM Label, where he released his thoughtful debut record, In Line, with Norwegian bassist Arild Andersen, in 1983.

Since then, he has released over 30 albums as a leader, and has continually increased his list of remarkable collaborators to include Elvis Costello, Yo-Yo Ma, Bonnie Raitt, Allen Toussaint, Lucinda Williams, Joe Henry, Buddy Miller, and many more.

Released in early 2016 on Okeh Records, When You Wish Upon a Star pays tribute to “the countless, anonymous, uncredited, unsung, extraordinary musicians” of the films and TV shows that are “embedded so deeply into the fabric of what fires up my musical imagination.” Featuring Petra Haden (vocals), Thomas Morgan (bass), and Matt Chamberlain (drums), the album was given 4 ½ out of 5 stars on All About Jazz, who called it “music that will likely assume even greater freedom and collective/collaborative expansion in a live context.”

Seattle Repertory Jazz Orchestra performs a rousing tribute to the seminal 1957 collaboration between Miles Davis and Gil Evans, Miles Ahead. The album merged Davis’ brassy bravado with Evans’ novel orchestral instrumentations to create one of the most celebrated jazz albums of all time. This concert will highlight several trumpeters from SRJO, including Jay Thomas, Thomas Marriott, Michael Van Bebber, and Andy Omdahl, as they bring works such as “Maids of Cadiz” and “My Ship” to life, along with other works rarely performed.

The SRJO, founded in 1995, is a 17-piece big band jazz ensemble dedicated to preserving and celebrating the unique American art form of large ensemble jazz. Its performers consist of some of Seattle’s most passionate and experienced jazz musicians, playing an extensive repertoire drawn from all across jazz’s 100-year history.