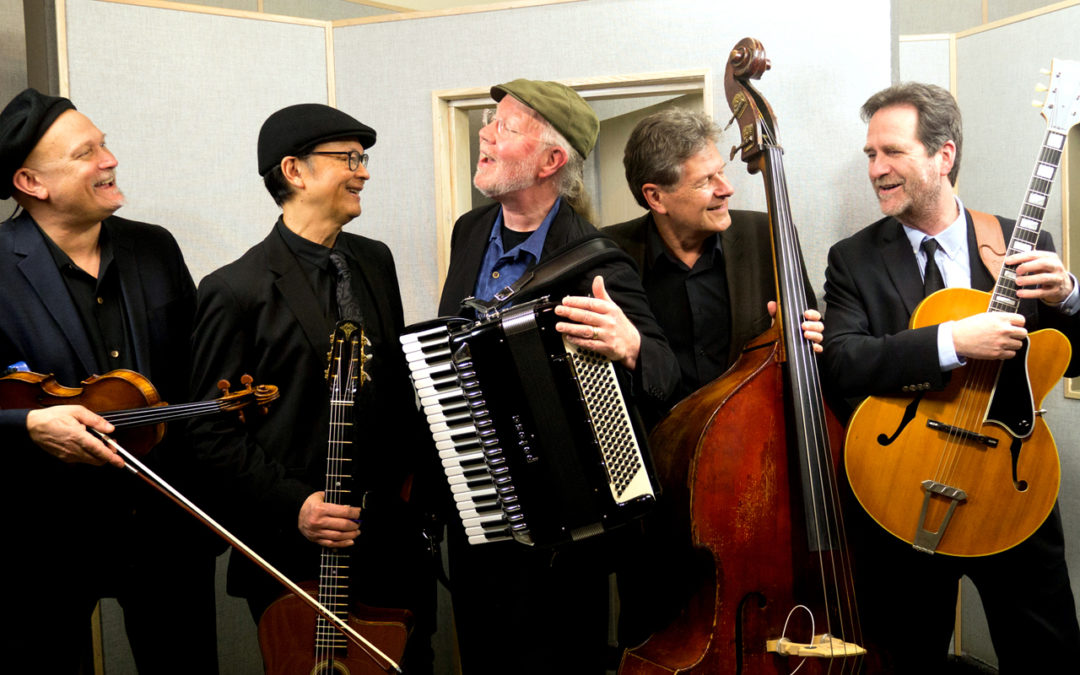 Since their inception in 1994, Pearl Django has played a major role in popularizing the Pacific Northwest’s distinct gypsy-jazz scene. 25 years, 14 albums, and over a hundred Jazz Alley performances later, the group returns to Jazz Alley to ring in the new year.

Gypsy jazz is a style of swing, which began in Paris during the 1930’s. The Romani-French guitarist Django Reinhardt—famous for his lightening style despite the paralysis of two fingers—and violinist Stéphane Grappelli—who popularized a leisurely, yet virtuosic approach to jazz—founded the genre through their “Quintette du Hot Club de France.” Since then, Hot Club bands, festivals, and communities have emerged everywhere from Scandinavia to Seattle, where Whidbey Island’s Djangofest has been attracting “Djangophiles” from around the globe.

Distinguished by their charming virtuosity and their smooth, yet eclectic approach to the genre, Pearl Django has made their mark on the local scene with their refined versions of gypsy standards, as well as inventive originals. Guitarist Neil Andersson founded the group with David “Pope” Firman and the late bassist Dudley Hill. A veteran of the legendary Northwest rock outfit, The Wailers, Andersson was instrumental in leading Pearl Django to the world capital of gypsy music, Samois-Sur-Seine, for the prestigious Django Reinhardt festival in 2002.

For the January 2 and 3 Jazz Alley performances, Andersson is joined by bassist Rick Leppanen, the solid low end to their hot club sound since 1998, along with the versatile violinist and member since 1996 Michael Gray. They’re backed by the tone-bending accordionist David Lange, and the band’s twin sultans of swing, guitarists Tim Lerch and Jim Char.

Despite changes in lineup over the years, Pearl Django hasn’t lost a beat. Their music has been featured in films, nationally broadcasted television programs, and NPR’s “All Things Considered.” The well-loved group has also taken the coveted Earshot Jazz Golden Ear award for Northwest Acoustic Ensemble of the Year in 2018. Still going strong, Pearl Django plays the genre “with such verve, skill and pleasure that they’re pretty much irresistible to jazz and non-jazz listeners alike.” (Seattle Weekly).