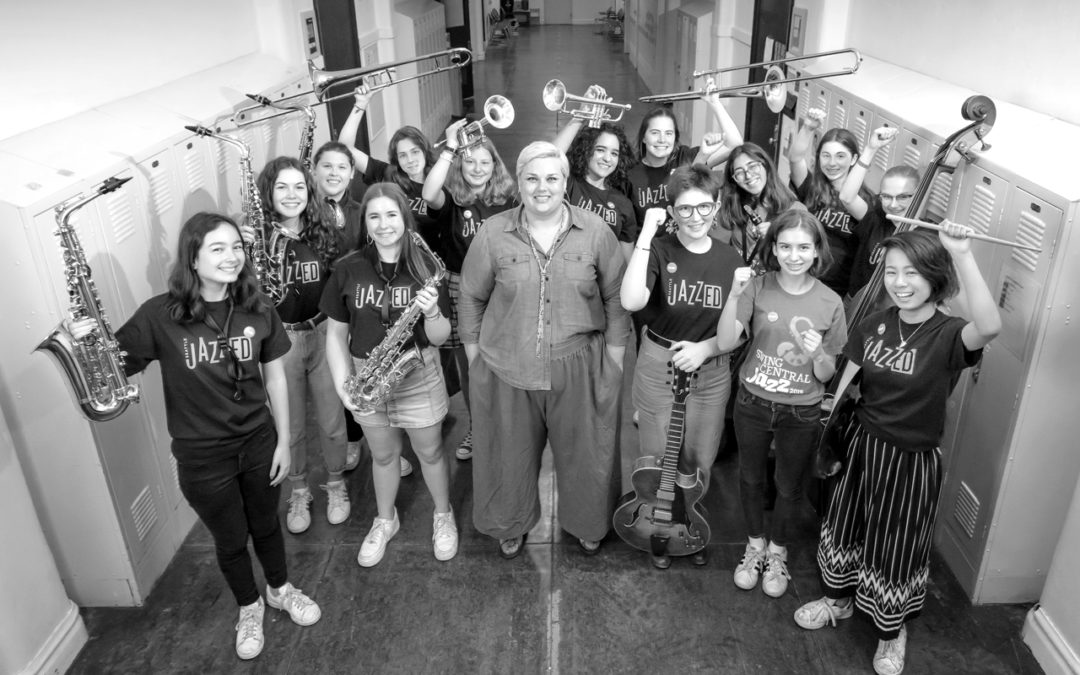 Nestled in the back corner of the MLK FAME Community Center sits the Seattle JazzED classroom, abuzz with the chatter of voices and instruments. It’s 5pm in the middle of spring break and the Girls Ellington Project has just returned from competing at Swing Central in Savannah, Georgia, marking an historic moment as the first all-girls ensemble to compete at a national competition.

“I can say completely seriously that Savannah—traveling with [this band]—is the best thing I have ever done in my life,” declares Brooke Lambert, a 10th grade alto saxophone player.

The Girls Ellington Project did not place as a finalist in the competition—those honors went to Memphis Central High School in first, Tarpon Springs High School in second, and Enloe High School in third—but their presence itself was a major win.

“I’m a very competitive person and typically when I travel with students to competitions I am devastated to not place,” says Girls Ellington Director and JazzED Education Director Kelly Clingan. “I so did not care on this trip, like, at all. I was completely unphased. Just getting in felt so huge. Unbelievable. It was so powerful and moving.”

Seattle JazzED maintains that jazz is a quintessentially Black American art form and operates from a framework that centers racial equity. Clingan founded the Girls Ellington Project seven years ago to counter gender inequity and promote gender parity in jazz. The current ensemble includes 24 female-identified students grades 8–12 from 14 schools across the Seattle region. Their audition tape for Swing Central was selected through a blind jury process, meaning the judges did not know they were listening to an all- girls ensemble.

In stark contrast, the 2019 Swing Central judges, clinicians, and performers were all male, a glaring imbalance felt acutely by the ensemble during the week of workshops and competition.

“I wish they had female clinicians,” remarks eighth grade pianist Marcela Bonet, “In my experience I work better with female teachers.”

The other bands, too, were made up of mostly male students, particularly in the brass and percussive sections, reflecting the gender disparity that permeates the jazz genre at large. The gendering of instruments is a social construct evolved from jazz’s history of discouraging women to pursue an instrument beyond their voice. During the saxophone clinic, 11th grade alto saxophonist Ava Lim recalls taking note of the 70 other, mostly male, saxophone players: “That was the first time I was ever really like, ‘Oh my god, we’re really here, and also, we’re really all girls.’ Looking around that room, and especially in front and behind us and only seeing guys was really intimidating.”

The band’s signature bright pink Jazz Girl buttons, and corresponding #jazzgirl hashtag, have become a strategy to break through the nerves, to forge personal connections, and draw attention to the importance of representation. “We’re reclaiming pink!” exclaims Clingan.

“It was so cool that so many of the guys were asking if they could wear the pins,” says 10th grader Lilia Sanders. “Some of them were like, ‘Am I allowed to wear this?’”

Tenth grade drummer Emma Usui-Villareal echoes the sentiment: “It was really cool to look out [at Swing Central] to all the bands and see guys, and girls, and clinicians—someone was always wearing a pin….Anytime we gave a pin to another girl their face would light up.”

The Jazz Girl movement did not go unnoticed by the organizers of Swing Central, who gave the band a special shoutout from the stage during the finalist announcements. In light of the Girls Ellington Project’s presence, Swing Central has promised to move forward with a more intersectional panel in the future.

“That was, for me, the most rewarding part,” says Clingan, “to be there and for the festival to change now how they’re going to do things.”

As an educator, Clingan embraces change, acknowledging that what we understand as best practice now is ever-evolving and asserting that in order for young women to thrive in jazz, the culture of music education needs to shift. During Swing Central, the younger group of teaching staff provided a nourishing clinic, calling the Girls Ellington Project the most soulful band there. The clinic with the older teaching staff—who enforced a firmer, by-the-book practice—elicited mixed reactions.

“Watching [the girls] try and learn in an environment that was keeping them from learning was very frustrating because I know that you cannot—you should not—speak to young people like that. But we raise boys to be accustomed to being spoken to that way,” says Clingan. “The way that we teach kids is changing and that’s positive. It’s based on what we consider best practice. [The clinicians were] definitely coming from a good place, but it was a different way of teaching that is not the way to retain girls in your program.”

Some of the Girls Ellington musicians were able to glean value from the experience because the teaching style was familiar to instructors they’ve had. “I did feel, in the moment, that I was able to get something out of [the clinic] because I have had teachers like that,” says senior baritone saxophonist and clarinetist, Jahnvi Madan. “But I don’t know if that’s a good thing or not. I do think that the hardest experiences I’ve had in jazz—like the moments that I have felt like quitting—have been the moments that now make me able to take and learn in environments like that.”

The Girls Ellington Project has provided a safe space for the young women to build trust among one another while developing individually as artists.

“I really enjoy being in this band and playing with this band,” says 10th grade trumpeter Sylvie Kromer. “It’s such a stress-free environment. I always feel really supported even if I mess up a solo.”

Clingan advocates for young women instrumentalists learning to solo early and often as one of the main tenets of tipping the scales toward gender parity. The invitation can be startling. “This is the first time that I’ve ever had a bass solo in a big band,” says ninth grader Grace Kaste. “When [Kelly] gave me the solo I was like, ‘She’s insane!’”

“I don’t really take solos that often especially at my high school band,” echoes Parker Crotty, a 12th grade trombonist. “I think this is a really open space to solo in. I think especially since jazz is a very expressive genre of music that even if a solo isn’t good all the time, I think it’s important to have people try.”

Soloing takes self-assurance and a certain kind of swagger, which girls are more often than not socialized to suppress.

“Girls feel like they have to get it perfect before they can play it in front of other people because they’re afraid of being judged more harshly, which they probably are going to be anyways,” explains 10th grade guitarist Faye Alesse.

The anxiety of perfection is pervasive. Even when success is obtained, doubt remains.

“I finally made it to the top band [in my high school] and then as soon as I got there I was like, ‘Oh god, I have to prove myself now,’” says Lim.

“I have received six different email apologies,” says Clingan, “about, like, not learning a part. And it is so fascinating that there’s this clear desire to nail it, but this feeling of having to apologize before it’s perfect is very female.”

The Girls Ellington Project acts as an antidote to the onslaught of structural bias—explicit and implicit—that young women instrumentalists experience elsewhere. The confidence gained has had a ripple effect, making the young musicians more comfortable in claiming space at jam sessions and in their high school bands.

“I have always played very quietly because I’m always afraid that I won’t do well or something and then it became a habit,” says Alesse. “Being in this band I feel like it’s okay to play louder.”

Yet challenges persist. Many of the girls recalled experiences of having to fight for space in their high school ensembles, often without their instructors advocating for equal representation.

“I find that in education a lot of teachers want their students to work it out: ‘You decide who plays lead, you decide who takes the solo,’” explains Clingan. “And that’s a great concept— of course we want kids to work these things out—but you are not taking into account the social dynamics of middle school and high school when you do that and then your girls are usually the ones that are left behind.”

When Clingan asks for a show of hands to see who thinks playing in the Girls Ellington Project makes them a better player for their school band, there’s no hesitation as each girl throws an arm into the air.

“Even though we don’t play a lot together I feel like I have improved the most I ever have playing for this band,” says Bonet.

The ensemble’s presence at Swing Central validates Clingan’s work and is indicative of the power that comes from creating a space that meets the needs of the students, not vice versa. When asked what comes next from this moment, Madan says with certainty, “I think that the future of jazz is definitely going to be a lot more female. And I really feel like this band is going to be big in this area adding to that.”

With the #jazzgirl movement gone national, the paradigm is shifting.

← In Memoriam Letter from the Director →