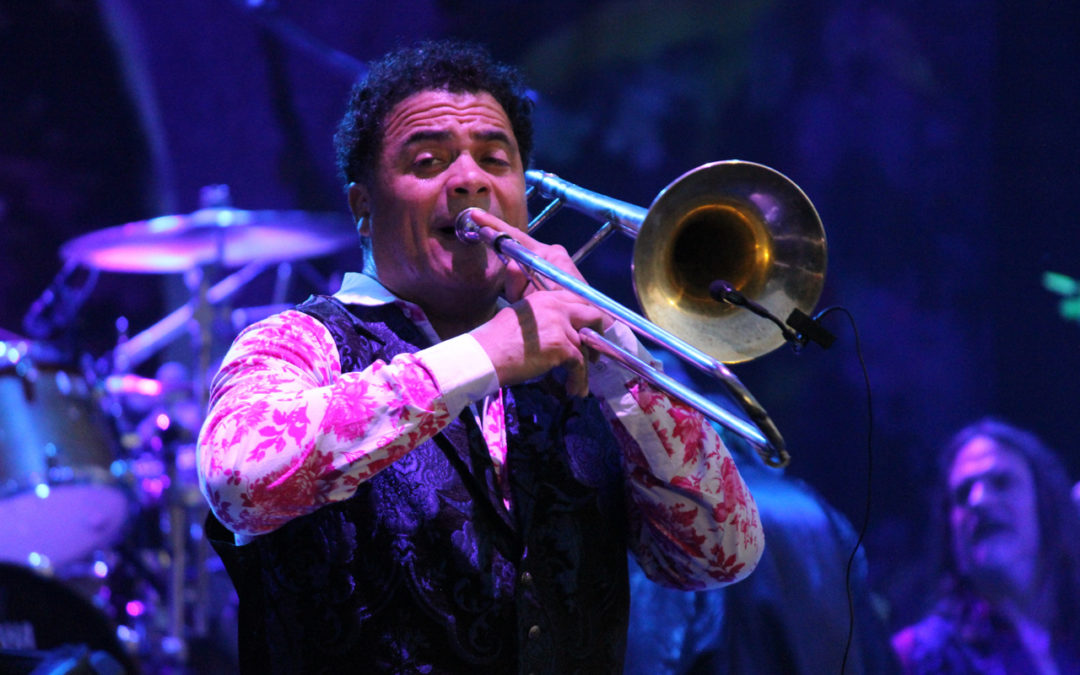 Clark Gayton performing with Little Steven and the Disciples of Soul in Omaha, Neb. by Cornstalker, Wikimedia Commons.

Throughout the year, Earshot Jazz is proud to share brief excerpts from the forthcoming book, After Jackson Street: Seattle Jazz in the Modern Era (History Press of Charleston, S.C.), by Seattle’s preeminent jazz writer, Paul de Barros. Picking up where Jackson Street After Hours (Sasquatch Books, 1993) left off, the new book will feature fascinating interviews with the familiar artists and under-sung heroes who shape the vibrant jazz scene of the Pacific Northwest.

We often hear about players who have gone through Seattle’s world-renowned high school jazz bands and later found success in New York, mu­sicians like flutist Anne Drummond, trumpeter Tatum Greenblatt or drum­mer Kassa Overall. One musician who sometimes gets lost in that discussion, however, is trombonist Clark Gayton, who actually was the first student of Clarence Acox’s to make a name for himself in the Big Apple. A long­time freelancer in New York, Gayton played with the Mingus Big Band in the 1980s, has toured Europe with McCoy Tyner, spent three years on the road with Bruce Springsteen and, more recently, played with The Roots on “The Tonight Show Starring Jim­my Fallon.” He also comes from an il­lustrious Seattle jazz family. His uncle, Leonard Gayton, was playing at the old Chinese Gardens as early as 1931. Growing up, Clark spent many hours with Leonard listening to records from his vast collection of ‘78s.

When I caught up with Gayton in New York last year, he was on his way to a rehearsal with Stevie Van Zandt and had just been in Seattle with the Duke Ellington Orchestra. Born in Seattle in 1963, Gayton started on pia­no when he was 7 years old and played trumpet and tuba before finding his main squeeze, the trombone, which he bought with money he saved from his paper route. When he got to Garfield in 1977, he played tuba in the dynamic marching band Acox had been hired to form in 1971, to rev up school spirit. However, there was as yet no Garfield High School Jazz Band, and therein lies a story.

“We had enough guys in the march­ing band who liked big band music, so I said, ‘Let’s start a big band.’ I got guys together for the trumpets and trombones and the rhythm section and I asked Acox, ‘Can we get the band room at 7 o’clock (a.m.) to put this thing together?’ He said, ‘Yeah, sure. But what are you going to play?’ So I said, ‘Well, I wrote some arrange­ments and I also bought a Sammy Nestico arrangement of ‘Li’l Darlin’. And Acox dug it!”

By 1979, the Garfield High School Jazz Band had become an official class, with Acox at the helm. And the rest, as they say, is history.

Gayton, for his part, graduated from Garfield in 1981 and went on to the Berklee College of Music, in Boston. After a three-year program there, he moved to Oakland, California, where his mother had relocated. In nearby Emeryville he found an artist’s loft for $175 a month and soon found work in the house sextet at Milestones, with drummer Brian Kirk, who would later move to Seattle to teach at Seattle Central. Gayton also worked with big band leader Dave Hardiman, trumpeter Johnny Coles and even a few times with saxophonist Pharoah Sanders.

“It was a good thing for me to move there” he reflects. “I probably would not have been able to rub shoulders with these guys unless I was in the Bay Area.”

Three years later, however, he was encouraged by peers to go to New York. With just $800 to his name, Gayton scuffled, as so many have before, but he hung in there, playing jam sessions, even working as an usher at Radio City Music Hall, and finally one day got a call to play with trumpeter Charles Tolliver. Since then, he has had his ups and downs, but lately, he says, “It’s been pretty good. I cannot complain.”— Paul de Barros

← For The Record Celebrating the 31st Annual Earshot Jazz Festival →