A Royal Room of Sound 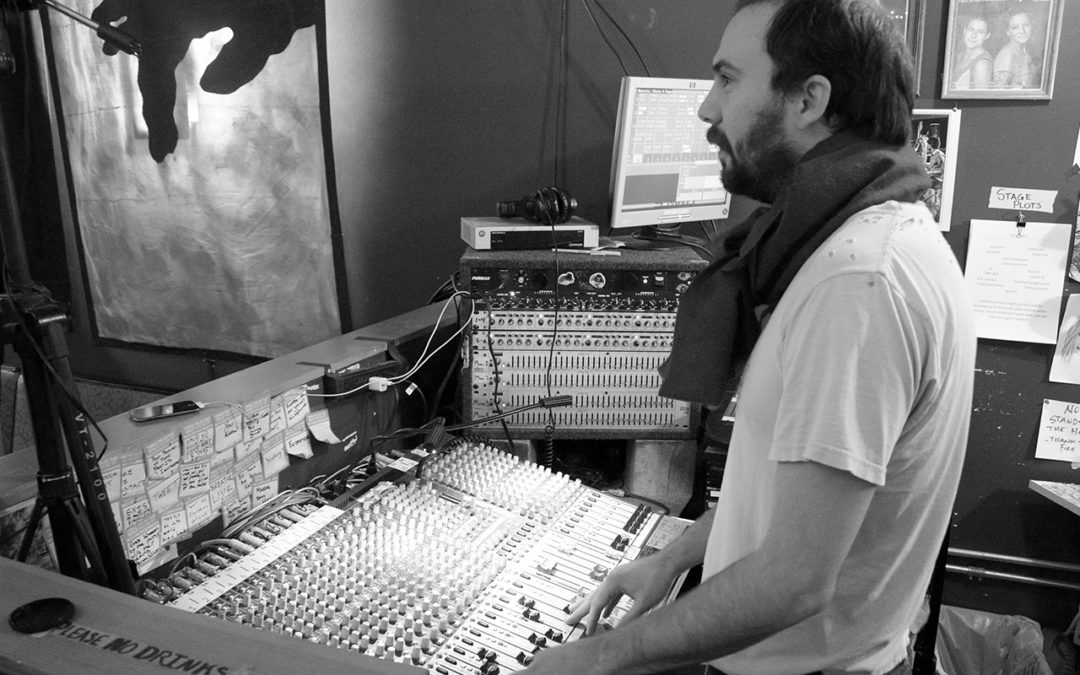 Calm. Steady. Hard-working. These would be just a few words used to describe the sound engineers at The Royal Room in Columbia City. Together, Brad Rouda, Kari Erickson, Kyle Mooney, and Mack Fisher are the behind-the-scenes foundation for all the musical moments at The Royal Room.

Rouda, who has been there since its inception, takes the lead on production matters, but in all other matters they share commonality in their expertise, job description, and even their biggest fear—a real fear in all of its absurdity:

“I have nightmares of someone pushing the piano off the stage,” states Erickson. Laughter erupts.

Unique to The Royal Room, the Steinway B, appreciated by many musicians who play there, is located just one foot from the edge of the stage. Since every musical act has different needs, a consequence of this is that the piano gets pushed around a bit.

“I have nightmares of me knocking it off,” follows up Rouda.

“It gets momentum too,” adds Fisher.

Whether or not Erickson’s magnetic barrier idea is the best, she does know a lot about sound, piano corralling aside. She has 20 years of experience as a sound engineer, starting out as a young woman in New York. She began her career working in lower Manhattan at an experimental music club called Tonic, which she says is similar to The Royal Room is; she even calls The Royal Room its “West Coast cousin.”

After New York and touring extensively, she is now active on the live music scene here in Seattle. Along with The Royal Room, she mixes and tunes up the music at The Tractor Tavern, Town Hall Seattle, Seattle Center, and “anywhere that will have me.” What she likes best about The Royal Room is “the booking…even if it’s not your favorite genre, what’s coming off the stage is high quality, which makes the job easier.”

Mack Fisher, on the other hand, is a local and went to Seattle Central for film school, where his path then diverged into music. He composes experimental digital music, but never really wanted the life of a working musician. Doing sound was a counterpart to making music as a living. The Royal Room has been his first engineering job, and he loves it.

Brad Rouda, also a musician himself, has been at The Royal Room since it opened on December 16, 2011, and performs most of the managerial tasks of the group. He deals with the contracts and riders, makes the schedule, and coordinates the production details, communication, and even rehearsal rental for musicians.

Together with Kyle Mooney, the four of them pretty much get everything done. They act as the house managers, arriving early before every show. Sometimes a musician will request a particular engineer, but, along with camaraderie, quality is high amongst the four, so every night is a well-staffed night.

Working with musicians is mostly fun for these engineers, but they do face challenges. Rouda, for example, encounters issues when it comes to proper vocal mic technique. He says that sometimes singers’ nerves make them back off of the mic or get too close. For a long time, he’s wanted to teach a “‘this-is-how-you-use-your-mic’ course.”

Fisher would like musicians to trust the engineers more, and wishes that they could “100% relinquish control of the room.” The engineers really know the room, and although musicians have an idea for a specific sound, sometimes it doesn’t necessarily work in this specific room. “We know that what they are aiming for isn’t going to work in here,” he says. “They need to listen to the engineer when they say why something isn’t working.”

“It is a very small space,” proclaims Erickson. Musicians need to think about how much sound is going towards the back wall and bouncing back. “If anyone in the room has to wear earplugs, there is something wrong,” she says, “even a rock show—unless you are right in front of a bass amp or something….If the audio engineer is wearing earplugs you’re in trouble.”

In all their years, they’ve been witness to some unfortunate stage incidents, like the violin that had travelled in a case overnight from a colder climate. Immediately played upon removal from the case, it cracked right down the center for all to see. “That was pretty tough to watch,” Fisher sighs.

Festivals provide their own challenges. “All festivals are equally irritating and fun,” says Fisher. It is fun to be doing a shift where there is a lot going on, he says, but “everyone is pretty frazzled and everyone is worried about themselves. It’s hard to be the guy who has to cut someone’s set and tell all the bad news.”

Erickson asserts that sound engineering is all about “bedside manner.” Her aim is to have a good one, to smooth over the rough spots and help to create a positive working environment for everyone.

Rouda concludes, “Engineers are here to help you. We just want to work with you.”

They all want to write “a Miss Manners guide for engineers and musicians with a translation for both parties,” like a language dictionary. He says the opening line would be, “We all know everything.”

They are a pretty humble bunch, but from talking to them in regards to The Royal Room, maybe they do.

The Royal Room has live music seven nights a week, and is all ages until 10pm.

Visit theroyalroomseattle.com for more information and for upcoming events.

← Recurring Jazz Series  Seattle on the Spot: The Photographs of Al Smith →