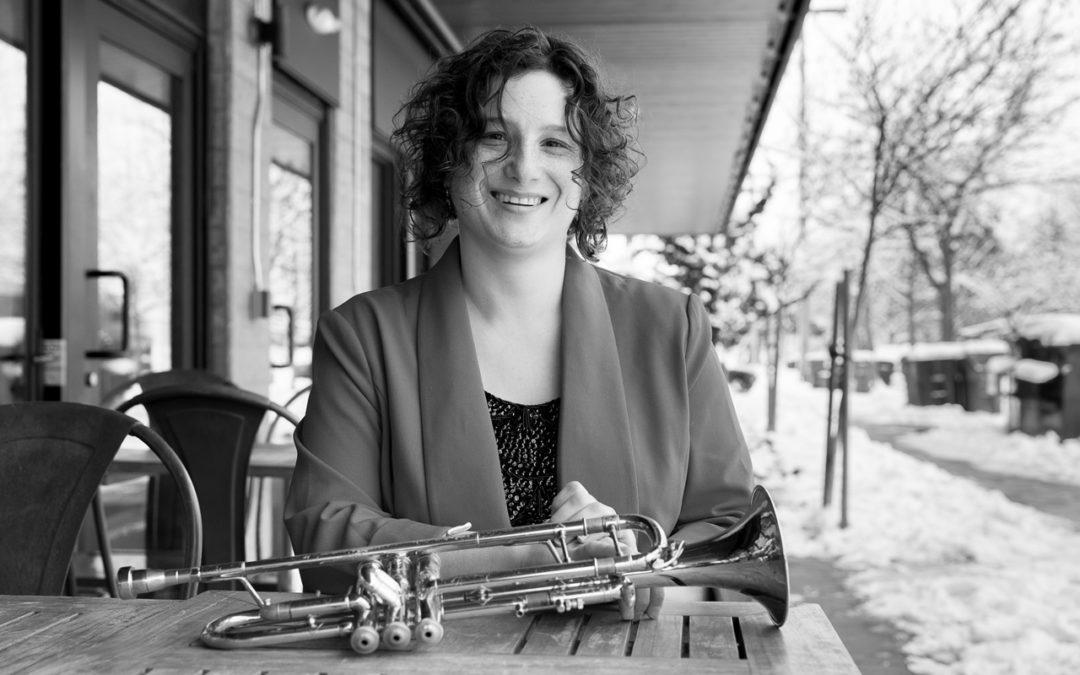 Samantha Boshnack is an artist who is difficult to define. While the entertainment industry and its fans continually relegate artists to rigidly defined categories, Boshnack remains an outsider to the very identifiable genres she draws from. In the jazz world in which we reside, the very fact that she is a trumpet player enables fans and journalists alike to pigeonhole her with comparisons to bebop and postbop players whose art centers around their prodigious skills as improvising soloists. Others may draw conclusions based on her abilities as a composer and session player, placing her into categories related to classical music. Still those who lean more towards the avant-garde claim her for their own, citing her inclination both as a composer and player to reside on the outside limits of melodic sensibility, and time.

Ultimately, Boshnack identifies as a jazz composer and artist. While her music may not swing, it has a definite groove. She enjoys being a bandleader with purpose. “I love working with jazz musicians and the freedom it brings,” she says.

Boshnack’s latest work, Seismic Belt (Orenda, 2019), places the artist in a light that may be best described as a project artist. Her creative timeline over the past four years has seen her write five concertos for five instruments representing five continents, on her groundbreaking album, B’shnorkestra: Global Concertos (Self-Released, 2016). She told the story of journalist Nellie Bly and her courageous activism that exposed the atrocities of mental health institutions during the late nineteenth century. The piece and subsequent release, Nellie Bly Project (ARC, 2017), graphically expresses the courage and selflessness of Bly’s historic actions.

Boshnack writes with purpose and passion, with an uncanny way of expressing a narrative. She is a musician, a composer, a feminist, an activist, and most certainly, a storyteller.

“One of the greatest joys of living in the Northwest is hiking the incredible mountains of this region. Even after being here for almost 16 years, these snowcapped giants still amaze me. I never saw anything like this in my home state of New York,” muses Boshnack. In 2012, she composed the three movements of “The Exploding Suite” for the Sam Boshnack Quintet, which she dedicated to Mount Saint Helens. Since then, Boshnack has been inspired to “continue to explore writing music based upon these natural wonders.”

The idea that spawned Seismic Belt, was first touched on with her quintet album, Exploding Syndrome (SelfReleased, 2014). Boshnack’s fascination with volcanoes first came to light when she suddenly found herself coexisting within the ring of fire following her move to Seattle from upstateNew York. The fully realized concept resulted from a three month “Make Jazz” residency at the 18th Street Arts Center in Santa Monica, CA. With the basic premise of the piece already conceived, the residency required Boshnack to compose and perform the piece within a strict time frame. The pressure of the time constraint offered a new challenge for Boshnack. The creative process however, was familiar, with conception being established before finding the right sounds and rhythmic qualities of the music itself.

“I am interested in creating intricately woven soundscapes that harbor deep grooves and explosive improvisations, with many layers of melodies built upon a strong bass undercurrent,” says Boshnack. This may seem to some to be an extremely abstract concept, and a huge risk artistically. That being said, Boshnack encapsulates that concern stating simply, “There is an element of risk and faith when it comes to living on the Ring.”

The musical expression of seismic activity demonstrates aptly Boshnack’s courageous nature as an artist. While most art springs from the well of human emotion and experience, Seismic Belt largely expresses the volatility and movement of the very earth we walk upon.

“This project explores the similarities between this style of composition and the Ring’s seismic activity. It experiments with the friction of these geographic shifts, which can be peaceful or disruptive, to create a new harmonic topography that honors this huge force of nature,” explains Boshnack.

Boshnack first performed Seismic Belt at Crossroads School for the Arts and Sciences in Santa Monica, California at the conclusion of her residency at the 18th St, Arts Center with a Los Angeles ensemble. The Seattle debut took place at the Royal Room during the 2018 Earshot Jazz Festival. Violinist Lauren Elizabeth Baba was the constant, flying in from Los Angeles for the Seattle performance, adding a vital textural quality to the music. Her neofolk approach blends with Boshnack’s fluttering, vibrant tonality to create contrasting sounds that grind and join gracefully before drifting apart again.

Seismic Belt is an exploration of nature and our risks within our relationship to it. The opening movements of the piece harmonically express seismic activity. The second half of the work draws from the stories, myths, and challenges of the cultures inhabiting the Ring. Boshnack draws from her personal experience of choosing to live in the shadow of Tahoma.

Art plays an important role in our lives in that it expresses individuality, creativity, and feeling. It enables empathy, awareness, and most of all, our humanity. At the forefront of artistic movement in any culture are those that dare to put their vision in action in the form of tangible, accessible art. While Boshnack does not perform live all that often, the performances she does engage in have a lasting impact on the overall consciousness of our community. Her recordings are like a dynamic footprint on a path to understanding. Her embrace is large, exposing a heart that reflects the inclusiveness of her being. We in this city on the Ring, are fortunate recipients.

Samantha Boshnack performs at the Washington Center Black Box Theater in Olympia on March 8 and celebrates the CD release of Seismic Belt on March 14 at the Royal Room.