Scott Brown: At the Helm of Roosevelt Jazz 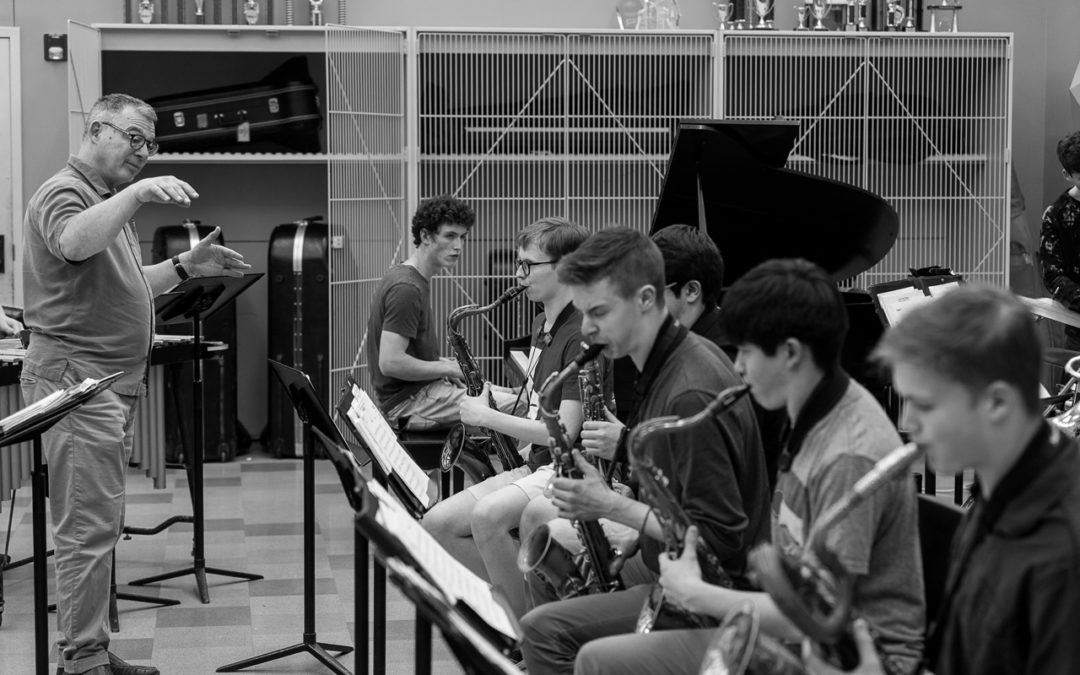 When Scott Brown’s Roosevelt High School Jazz Band competed in New York at the finals of the Essentially Ellington competition this past May, few expected the band to win. Though Roosevelt and Garfield had snagged the No. 1 spot seven times between 2002 and 2010, magnet schools like Florida’s Dillard Center for the Arts and the New World School of the Arts had bested them for several years.

Knowing what they were up against, the kids in Brown’s band prepared something they thought just might blow the wind back into Northwest sails. Boy, did it ever. Check out the video of their performance at Rose Hall (https://youtu.be/pXfNd-5f9sw). At minute 13:12, just as the band kicks off Dizzy Gillespie’s “Things To Come” at an unbelievable tempo of 300-plus beats-per-minute, you can see judge Lauren Sevian’s head rear back like she’s been shot with a cannon. By the time Carter Eng and Will Knight finish their lickety-split trumpet duel, Nathan Mesler rattles the vibes like the reincarnation of Milt Jackson, and the trumpet, saxophone and trombone sections nail each sizzling riff, Sevian and the other judges apparently need no more convincing. Roosevelt is back.

“I don’t want to say that’s what won it for us,” says Brown, sitting in his office after a rehearsal in the band room at Roosevelt last month, “but the last few years it’s become evident that you probably have to have something that’s over-the-top challenging to get into the top three.” It says a lot about Brown’s style that he didn’t even suggest the tune. After the Roosevelt kids found out they had made the finals, in February, they spent their “snow days” listening to everything in the Essentially Ellington library. When they asked Brown if they could tackle “Things To Come,” he was dubious.

“It’s brutally hard,” he says. “But in the end, it was a great choice, because they were motivated to work really hard on it. They knew I wasn’t going to let them do it unless it was superb.”

Brown’s philosophy of empowering students even as you insist on the highest standards has served him well. Raised on Bainbridge Island, he plunged into the stream of Northwest jazz early, playing trombone in jazz band at Bainbridge High School under the direction of Allan Villiers, who came through John Moawad’s foundational jazz ed program at Central Washington University, and competing at the first important student competition in the area, Ralph Mutchler’s Olympic College Jazz Festival. Moving on to the University of Washington, he studied trombone with Stuart Dempster and played in Roy Cummings’ Studio Jazz Ensemble, got his B.A. in music, then a teaching certificate. In 1984, he went to work at Roosevelt.

Long before the Ellington competition opened to bands west of the Mississippi, in 1999, Brown was leading his band over new horizons. In 1991, he convinced the tour manager of the Count Basie band to let Roosevelt open for Basie at the Fifth Avenue Theatre. A gigantic poster commemorating that concert hangs in the band room. Roosevelt made the finals the first time it entered Essentially Ellington and has continued to do so, 19 out of 21 tries. Roosevelt and Garfield are now tied with four first place wins apiece, more than any other band.

None of this comes without hard work. Brown teaches five classes a day: the No. 1 jazz band, concert band, symphonic band, wind ensemble and a percussion group. During football season, he’s responsible for marching band, too. The day after he got back from New York, he went straight into rehearsals for the school musical, “A Chorus Line.”

Brown accepts the superhuman demands of his calendar with stoic grace. “I’m a band director,” he says. “That’s the gig.”

When Brown started at Roosevelt, there was one jazz band. Now there are four. The other three are taught by Brown’s student from the ‘80s, tenor saxophonist Mark Taylor, and trumpeter Michael Van Bebber. Taylor says Brown’s enthusiasm for his work is “sort of like a baseball coach. He just lives it and breathes it.”

Brown’s current students have high praise for him, as well. “We had a little slump before Ellington,” says Elise Toney, a senior who played a terrific trombone solo on Duke’s “Solid Old Man” at the competition. “He gave us this huge pep talk. ‘Get your heads in the game! Don’t overthink!’ He’s very helpful with your mental state. He always makes an effort to be friends, not just an authority figure.” Vibraphonist Nathan Mesler, a sophomore, agrees. “It’s never about power, it’s about making suggestions,” he says.

Brown’s willingness to listen is evident, even as he rehearses the band for Waldo Fest, last month’s celebration of the late Waldo King, who started the jazz program at Roosevelt. After running through Basie’s loping “The
Deacon” and a great John LaBarbera arrangement of Duke’s “Fantazm,” Brown asks the kids what they’d like to play for the event. “Thank you for your input,” he responds, after they choose the Ray Charles/Basie classic, “I Can’t Stop Loving You.”

Of course, it’s not just the input of the students that keeps the Roosevelt juggernaut rolling. The Roosevelt Jazz Boosters—volunteer parents— donate enormous amounts of time and money. The annual dues for each Roosevelt Jazz Band family is $625, yet the boosters raise several times that amount to pay for scholarships, travel, equipment and other expenses. Taking a band to New York or on its biennial trips abroad isn’t cheap. Last year, the band played at festivals in Montreux, Vienne and North Sea, with a stop-off in Paris at the famous basement club, Le Caveau de la Huchette.

“We are fortunate that many of our parents have the discretionary time and money to help with our program,” says Brown. “It doesn’t take away anything from how hard the kids work, but we are in a very advantageous demographic.”

Brown is aware of the inequities that affect the world of high school jazz band competitions. This year’s Roosevelt band is mostly white, as are the majority of the bands that compete at Essentially Ellington. Brown is an ardent champion of Seattle’s unique non-profit JazzED program, which is trying to level the playing field. But he points out that even bands from arts magnet schools like Dillard, primarily black, has “a great support system.”

“We can’t do it without everybody helping out,” says parent Frank Fulton, whose son, George, played tenor sax at Ellington. “It’s one of those ‘it takes a village’ kind of things.”

With the grueling hours Brown puts in, one has to wonder how much longer he can keep it up. “I’ve got a few years left in me,” assures Brown, when asked about any plans for retirement. “I’ll tell you one thing I’m really good at,” says the 61-year-old band director, “is going at it really hard when I need to, then cutting it off. I take my summers really seriously.”

That’s why you won’t be seeing much of Brown this summer: He’ll be off sailing his 31-foot boat, The Tally Ho. An avid sailor since his youth on Bainbridge, Brown loves the trip up to British Columbia and once sailed to Kauai and back.

Come September, he’ll be back in the band room, whipping a whole new batch of young jazz musicians into shape for next year’s Essentially Ellington. Who knows, another Northwest streak might be in the making.