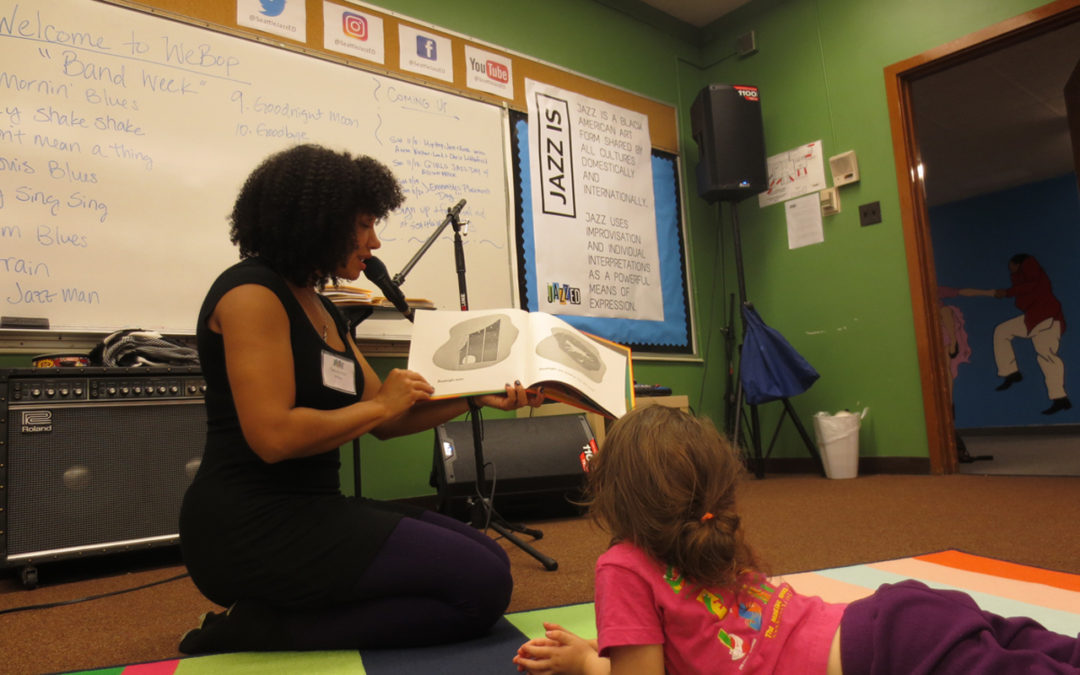 “This is scat week,” Tanesha Ross says to the three babies and their mothers perched on the colorful carpet in the middle of the MLK F.A.M.E. Community Center classroom in Madison Valley. Sixteen-month-old Parker shakes an avocado-shaped rattle, smiling shyly at Ross. Eleven-month-old Leo crawls in the direction of the drum set in the room where he heard a live drummer the week before.

To set up, Ross unfurls a few bars of “Oop Bop Sh’Bam,” in an easy, soulful voice, then turns to the mothers. “What are some funny noises your kids make that we could scat with?”

When someone suggests a motor-like bbbbb sound, lips vibrating, Ross incorporates it handily on the next beat. As the rest of the group joins in, Ross leans down gently to look Leo in the eye.

“I see Leo scatting!” she says, watching his lips start to motor. He beams.

Welcome to WeBop, a jazz education program for children 8 months to 5 years, celebrating its West Coast debut at Seattle JazzED this fall.

Developed by New York City’s renowned Jazz at Lincoln Center 12 years ago, WeBop’s 45-minute classes are designed as a child-adult dyad, inviting participation from both parties.

“We have a great-grandma who brings a child, a stay-at-home dad, several nannies, and moms,” says Kelly Barr Clingan, JazzED Education Director, of the organization’s new WeBop classes.

The curriculum is set up to help children “explore jazz through movement, songs, storytelling and play,” according to the Jazz at Lincoln Center website, and to provide both children and adults an opportunity to “learn about the core concepts, instruments, and great performers of jazz.”

All WeBop classes run for eight-week terms with live jazz every week. Each class, the musician-instructor introduces a new jazz concept to the children and adults (scatting, improvisation, swing, etc.) through various songs and activities, accompanied by a live pianist. The curriculum follows the basic model of “feeling the concept, learning about the concept, applying the concept, then reinforcing it with a jam session,” Clingan says. Weeks 4 and 8 are band weeks with jazz quartets that play throughout the class, working through the curriculum with the teacher.

“One touch that makes it so different than other classes for kids is that it’s not on CD; it’s live music,” Clingan says. “That’s really special.”

Certain rituals happen each class, including the “Good Morning Blues” song to start the day (in which the instructor sing-welcomes each child and adult by name); the “Shake/Move” song in which children and adults are invited to shake rattles and tambourines and/or move their bodies until the music stops at the end of each verse; and the “Goodbye WeBop Friends” song to wrap things up (when each child and adult is again bid farewell by name). Each class also has a story-time in which a picture book is sung to students to a jazz tune, such as Margaret Wise Brown’s Good Night Moon sung to the tune of John Coltrane’s “Naima.”

The live jazz, the chance for families to experiment with instruments together, and the personalized touches might be plenty to bring young families to WeBop. Still, there is more to this program for JazzED: the curriculum is grounded in research about early childhood development.

The “Shake/Move” portion of each class, for instance, “gives [kids’] inner sense of tempo an outlet,” says Ross, who is licensed in Kindermusik and has a background in music theatre performance. “We actually start perceiving music in the womb. We can perceive rhythm almost immediately but just don’t have the motor skills to express it.”

She also points out the fact that repeating “Shake/Move” and other activities regularly throughout the eight-week term is intentional, since “kids need repetition.” As groups are exposed to the same songs, stories, and activities multiple times, she points out that “throughout the weeks, you’ll see changes in the way that they’re using the instruments” and participating in familiar activities.

Furthermore, as Clingan puts it, the pedagogy itself “is jazz-like. When we think about jazz we think about creativity, expression and an improvisatory spirit. And that’s how the teaching is. The kids are allowed pretty much any self expression.”

Plus, Clingan continues, “As educators, we know that not all our students will go on to become professional musicians. Part of our job is to create lifelong music makers and music fans. I think this program really awakens that for these parents—maybe something they had forgotten they love, like live music—and shows them they can have that with their child.”

“Adults have as much fun as the kids,” she says.

Dall’osto adds that she and her husband (a guitarist and singer) wanted to surround their son with music they also like listening to.

“After the first [WeBop] class, I was sold. The teacher [Ross] is an incredible jazz musician—such a good voice, really good energy, and really engages the kids in ways that are innovative. She gets them going rhythmically, she surprises them in different ways,” says Dall’osto. “We’re learning new ways to engage musically with the baby. We’ve bought a lot of shakers!”

Winter WeBop classes will start the week of January 2, 2017 at JazzED, and be on Tuesdays and Saturdays. Registration is open now at www.seattlejazzed.org/webop.

JazzED launched as a nonprofit in 2010 with the goal of providing kids with “great music education opportunities, regardless of what school they went to or how much money they had,” according to its founder Laurie de Koch on the JazzED website. It started with two jazz ensembles that met weekly, and today serves 400 students through its numerous ensembles, masterclasses, summer program, vocal jazz, strings improv workshops, an all-city girls band, an annual Girls Jazz Day, and jam sessions. Learn more at seattlejazzed.org.