Whidbey Island Center for the Arts

Whidbey Island has been awash in sounds as of late. Unfortunately, according to most accounts, the sounds emanating from the island’s Naval Air Station facility have been of the unpleasant variety – many residents feel the noise caused by fighter jets running drills and practicing aircraft carrier landings is having an ill affect on their health. Here’s hoping that this year’s DjangoFest Northwest, which runs September 23–27, will offer a brief – and sweet-sounding – respite.

The festival marks its fifteenth year with the presence of Biréle Langréne, the French-born Sinté Gypsy/Roma musician many consider the rightful heir to Reinhardt’s throne and the artist whose presence festival attendees request more than any other. Much like Reinhardt, Langréne was a child prodigy, covering famous Reinhardt tunes to critical acclaim by the time he was a teenager. Later, he toured Europe and the U.S., where he impressed the likes of Benny Goodman, Jaco Pastorius, Al Di Meola, and Stanley Clark, and absorbed the musical languages of guitarists as wide-ranging as Wes Montgomery and Jimi Hendrix. Langréne brings to DjangoFest NorthWest his Gyspy Project band—an all-star quartet that performs Reinhardt’s repertoire. Langréne will be joined by Mathieu Chatelain (guitar), Diego Imbert (bass), and Frank Wolf (saxophone) for the headlining set Saturday night. For the Saturday matinee slot, the Hot Club of Detroit will join Northwest Gypsy jazz heroes Pearl Django, continuing their run of playing every DjangoFest Northwest ever held.

Friday evening brings Les Doigts de l’Homme, a group whose members come from varied musical backgrounds but who share a deep love of Reinhardt’s music. Their early work skillfully integrated rock and world music into Gypsy jazz, but the band has pursued a more “pure” sound since their 2010 album 1910, recorded in commemoration of Reinhardt’s birth. Joining them on stage will be Sebastien Giniaux, whose trio, in which he plays both guitar and cello, will fill the Friday afternoon slot. Friday evening’s performance begins with the LA-based Trio Dinicu, whose blending of classical training with the spontaneity of jazz and the excitement of the European folk tradition has garnered them well-deserved praise. Their pairing with Les Doigts de l’Homme makes Friday night a no-brainer for the not-to-be-missed list.

For the instrumentally inclined, DjangoFest NorthWest’s schedule are chock full of workshops and master classes. Learn the art of the Roma jazz style with Lache Cercel and the Roma Swing Ensemble, the authentic Parisian style with Frank Anastasio and Tommy Davy, accompaniment with Dennis Chang, violin with Luanne Homzy, or accordion with Julian Labro. Langréne and Les Doigts de l’Homme will offer workshops as well.

It’s been more than 60 years since Reinhardt’s untimely death. That his flame burns as strong as ever is a tribute to both his greatness and the hard work and dedication of artists and organizers that keep his legacy alive through events likes this.

Full schedule and tickets at djangofest.com/home/djangofest-northwest-2015/. 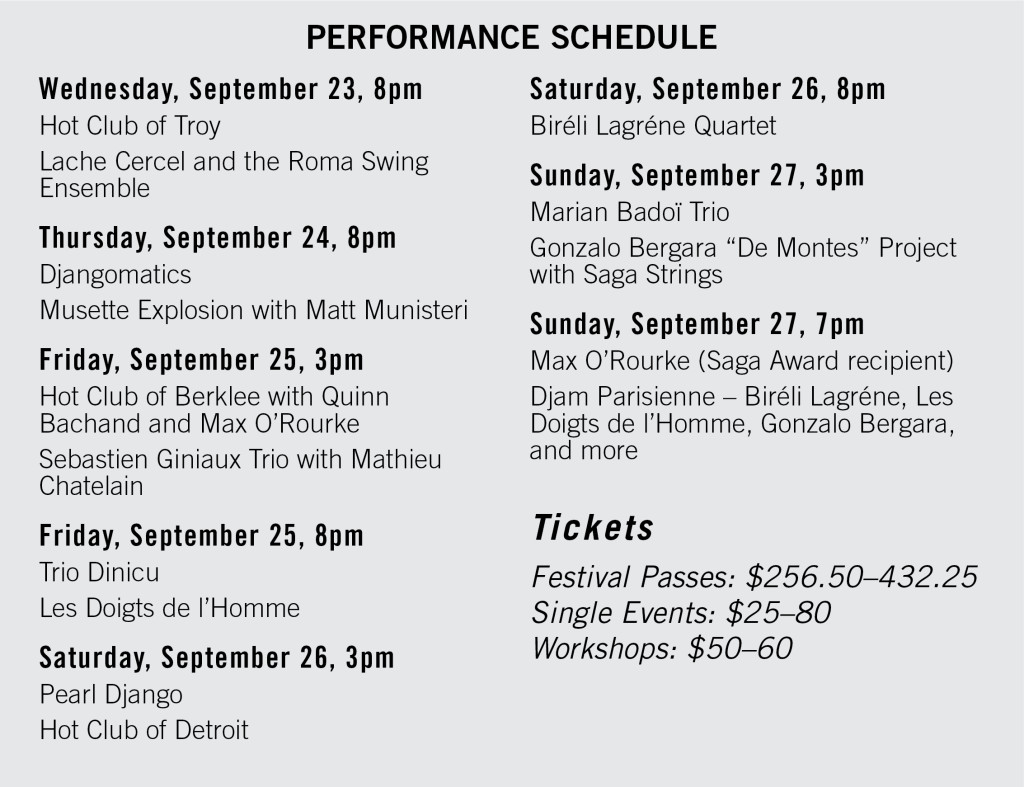