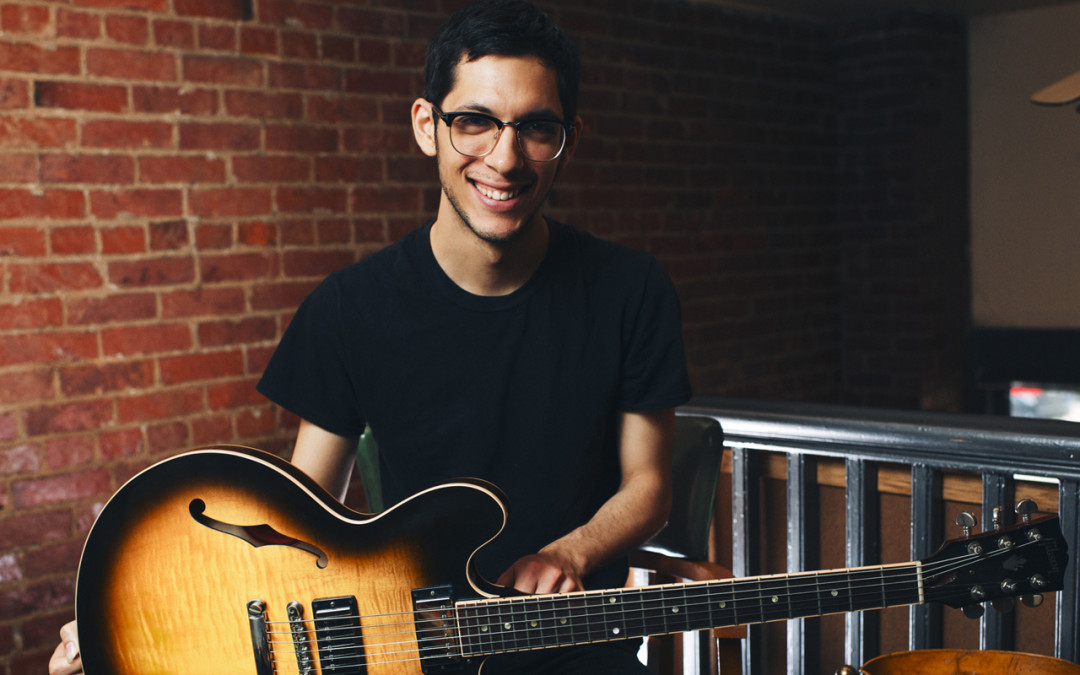 Gregg Belisle- Chi is a guitarist and composer of mercurial activity yet grounded focus, a contrast that plays out in his presence on the Seattle jazz and creative music scenes: seemingly ubiquitous, yet hard to pin down. In the middle of a wide-ranging and decidedly non-linear conversation that detoured in unexpected directions, the thoughtful and quietly humble Belisle- Chi exclaimed with a laugh, “I’m really good at derailing trains of thought!” An apt revelation for a musician of broadly varied approaches, interests, and activities.

On September 5, Belisle- Chi releases Tenebrae, his debut album as a leader. The album is a stunning exploration of compositions for solo guitar, along with three duets featuring Chelsea Crabtree on vocals. There is a somber beauty, an ethereal, almost spiritual quality to the music, which offsets dark and even jarring textures with a pastoral radiance, often within the same piece. When an artist as insightful and broadly based as Cuong Vu says, “This is some of the most beautiful music I’ve heard in a long while,” you know it’s time to pay attention.

Tenebrae’s genesis was Belisle- Chi’s deepening interest in formal composition, using the guitar as a tool for exploration.

“The composing I had done before was just for smaller jazz combos, simple chord and melody stuff, but this is a lot more in depth,” he says.

For inspiration, Belisle- Chi immersed himself in the string quartets of Bartók, and especially the music of György Ligeti: “His choral music, where all those sounds are meshing together…those really dense, close harmonies…that’s the thing I was going for.”

Though much of Belisle- Chi’s playing has an accessible lyricism and solid grounding in the fundamentals of jazz, Tenebrae seems to orbit around a less definable realm. It’s something more akin to eclectic avant-chamber music and open-minded experimental pop/rock songwriting, informed by jazz without actually being jazz. At times, it’s as if common jazz harmonic practice has been turned inside out: Harmonies that might be used as passing chords become a final destination, defying resolution in favor of a bracingly unfamiliar beauty.

Tenebrae is also a feast for guitar fans. Belisle- Chi cites particular inspiration in the idiosyncratic work of fellow guitar explorer Ben Monder. I also hear the textures and open-ended influences of Belisle- Chi’s collaborator and mentor, Bill Frisell, and, to a lesser degree, the prodigious right-hand technique and poly-stylistic approach of Ralph Towner. All this is wrapped in a lush yet uncluttered guitar sound, coupled with a beautifully warm analog recording, which gives Tenebrae an intimate accessibility.

Another element addressing accessibility is present on Tenebrae: A focus on exploring songwriting and melody, albeit somewhat unconventional forms thereof. Despite jazz music’s roots in strong songwriting traditions, Belisle- Chi has a sense that modern jazz has “missed the mark.”

“Some really interesting jazz-influenced music could be made with more attention given to songwriting,” he says. “That’s not necessarily a new idea, I just don’t think it’s been that well explored.”

In terms of current jazz composition, Belisle- Chi claims, “I don’t really have a grasp on why something’s trendy or not, what hits and what doesn’t.”

Some of the widely hyped releases in recent jazz, in which composition is ostensibly a central facet, leave Belisle- Chi with the familiar sense that it’s often still more about the playing than the writing.

“I don’t want to be disparaging…but sometimes I hear things, and I think ‘This really doesn’t sound like it was that hard to write.’”

This may explain some of Belisle- Chi’s affinities with the contemporary classical and chamber music scenes, where the pace of innovation in recent years both instrumentally and compositionally has arguably been much greater than that of jazz.

Belisle- Chi’s own writing method is one that is growing increasingly rare in our digitally networked world. He sits with his guitar, listens, and writes everything down with pen and paper, no computer sequencing or editing, no plug-ins, no shortcuts. What Belisle- Chi may forfeit in efficiency, he gains in a sort of gravity, and well-worked arrival at the notes and textures that truly convey what he’s searching for.

There is some irony in the fact that Tenebrae is largely a solo guitar album. Though he’s not uncomfortable with the role of front man, Belisle- Chi is definitive in his assertion that he will always want to do more than just focus on his own music.

“I love being a sideman,” he says. “That’s the most exciting part about music-making for me – getting into new situations and trying things out and bringing my voice into it.”

With a rigorous work ethic and a restless imagination, both as a sideman and alone, front and center, Gregg Belisle- Chi is busily establishing himself as an important and distinctive new voice in the contemporary guitar world.

Gregg Belisle- Chi celebrates the release of Tenebrae in a show at the Chapel Performance Space on Wednesday, September 9, at 8pm. Visit greggbelislechi.com or waywardmusic.org for more information.