Shifting Winds for The Westerlies

Catching Up With, September 2018 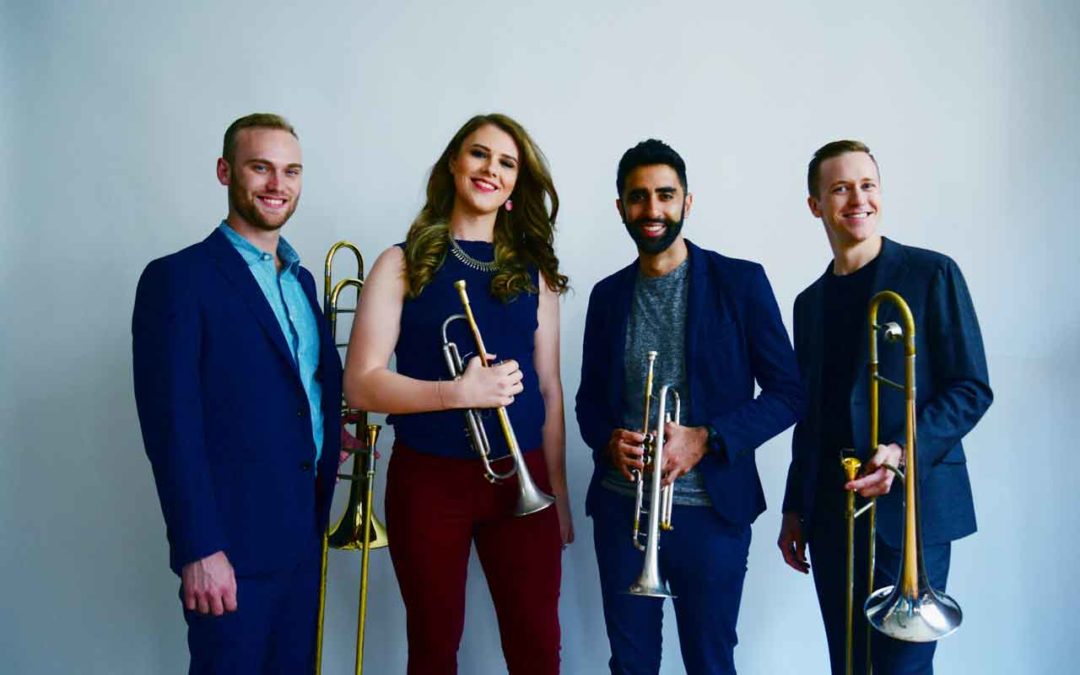 The past few months have brought shifting winds for The Westerlies, the Seattle-bred, NYC-based brass quartet. Formed in 2011 by childhood friends, trombonists Andy Clausen and Willem de Koch and trumpeters Zubin Hensler and Riley Mulherkar, the group has established itself as a strong, genre-bending force, gaining recognition from NPR and esteemed artists including Dave Douglas and Fleet Foxes.

This May, after seven years performing together, The Westerlies broke the news of founding member Hensler’s departure. Hensler’s difficult decision to leave came in part to physical struggles with the trumpet and in part to pursue his career as a composer and producer. In his place, the group welcomes longtime friend Chloe Rowlands. Rowlands first met The Westerlies before they were known as such, back in high school at various competitions, including the Essentially Ellington competition in New York City and the Monterey Jazz Festival, where she performed in a big band for which now-bandmate Andy Clausen won a compositional award. They all moved to New York at the same time, and while Rowlands attended the New School and pursued her own projects, she witnessed her peers create The Westerlies, watching as the group slowly grew into “something incredible, more than just another band,” she says.

“I was always drawn to this group because they really blend—I should say ‘we’ now—we really blend the boundaries of a lot of different kinds of music and I’ve never really seen a small ensemble like this that incorporates as much improvisation as it does while still maintaining very interesting, true composed music,” she says. “It sounds so personal and authentic.”

In her own music, Rowlands strives to accomplish a similar balance, and in joining The Westerlies, it felt as if “everything aligned.” The three founding members are embracing the new energy that the change in lineup has brought.

“Growing new community and new audience with Chloe in the group is a really exciting thing that we’ve already seen start to happen since we announced her joining just a few days ago,” says Mulherkar.

Born in Kirkland, WA, and raised in Phoenix, AZ, Rowlands is excited for the opportunity to visit Seattle more often as a part of The Westerlies. That opportunity presents itself this month , as The Westerlies return to Seattle for their inaugural Westerlies Fest, running September 20–23. On presenting the festival in Seattle, Mulherkar notes, “So much of the impetus for this festival was trying to think about how we can make something happen in Seattle that honors everything Seattle gave us growing up.”

The Westerlies got their footing at The Royal Room under the mentorship of Wayne Horvitz and then went on to forge new connections as part of Seattle’s Earshot Jazz Festival. Honoring the platforms that they were given, the group seeks to create new platforms to support artists they believe in. Clausen echoes this sentiment, stating that Seattle “has such an incredible ecosystem of music and music education that for basically as long as we’ve been a band we’ve been scheming some sort of way that we could give back to that community.”

The idea of giving back in the form of their own festival took hold several years ago. In March 2017, the band gained nonprofit 501(c)(3) status, modeling themselves after pioneering ensemble Kronos Quartet, among others, giving them the institutional backing of a board, mission, and vision that has propelled their ongoing community activism forward and stoked the flames of the festival fire.

One part educational outreach, one part collaborative performance, the four-day Westerlies Fest is an interdisciplinary and accessible affair. A full festival pass is just $40, and half of the festival performances are free with registration, including opening night at the Wing Luke Museum, Thursday, September 20, at 7:30pm. Longtime friend, powerhouse poet, and Youth Speaks mentor Troy Osaki has curated a stunning lineup of young talent featuring 2018-19 Seattle Youth Poet Laureate Azura Tyabji, Zora “Rainchild” Seboulisa, and Esther Eidenberg-Noppe. Friday night showcases Northwest-based contemporary music ensemble TORCH, the resident artist for Common Tone Arts. Saturday’s performance features multi-instrumentalist and singer Kate Davis, and a truly full-circle moment with the presentation of singer and composer Theo Bleckmann. The young musicians first became acquainted with Bleckmann over a decade ago when he performed with the Refuge Trio as part of the Earshot Jazz Festival. The Westerlies Fest will be the Seattle premiere of Bleckmann’s and The Westerlies collaborative project, “Songs of Resistance and Refuge,” highlighting protest movements past and present.

Throughout the Westerlies Fest, the band will offer in-school concerts and a creative workshop, reaching over 1,000 students in the greater Seattle area, including one full day of outreach in the Highline School District. Support for student scholarship opportunities comes from The Westerlies’ community of donors and sponsors. The festival culminates in a free program showcasing the workshop students in performance with The Westerlies at Seattle Pacific University on Sunday, September 23, at 4pm.

At this pivotal moment in The Westerlies’ trajectory, the group pauses to express gratitude. Recognizing the opportunities that moving to New York City has afforded them and celebrating their growing music family, their love for Seattle prevails; notes Mulherkar, “whenever we’re there it feels like coming home.”