Shuga Jazz Bistro: A Spread of Music Dished Out With A Southern Welcome 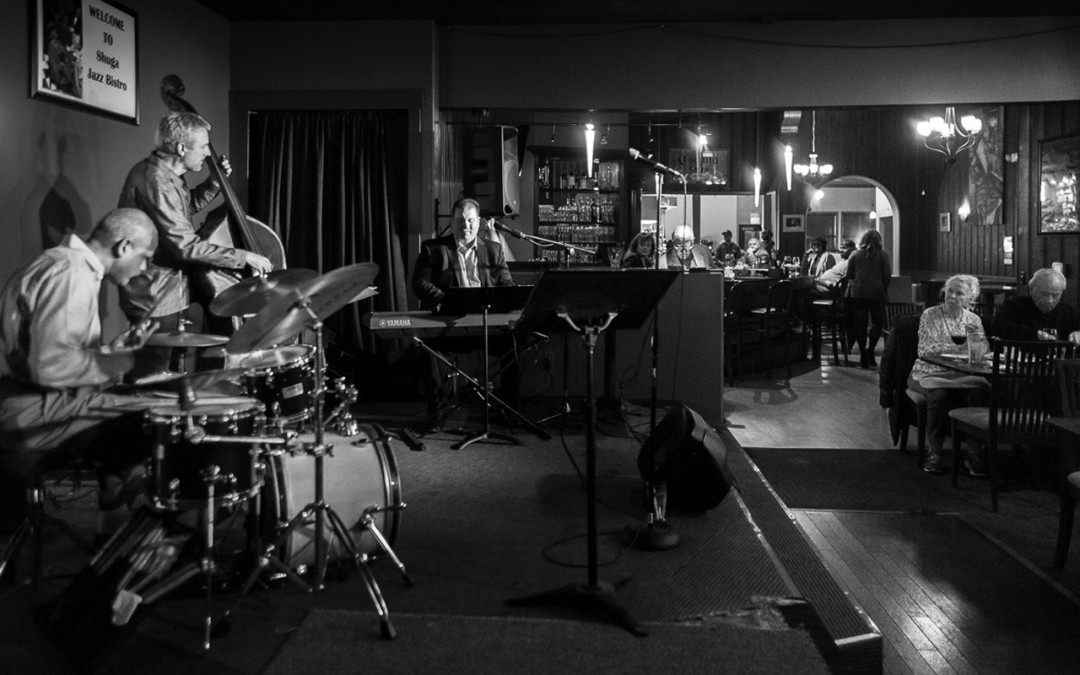 The band is big. Tight. And the heat of it amplifies the burnt orange on the walls – the splashy signature color of the club. It’s a dark Sunday evening in January and the Full Circle Jazz Ensemble plays to a full house, instruments gleaming on the well-lit stage.

Local piano giant Randy Halberstadt enters the scene. Immediately spotted by the band spokesman, Nathaniel Paul Schleimer, he’s quickly invited up to play, and Eric Verlinde, one of the ever-present keyboard sensations in the band, graciously yields the stage during their gig. It’s a piece that Halberstadt himself wrote, “Bad Bud” (named after Bud of Bud’s Jazz Records).

Halberstadt flies through the piece, the players right along with him. In the crowd, Kristine Anderson, herself a classical pianist, lifts up her arm and jokingly pinches herself, unbelieving, eyes wide with the appreciation only another artist can have. Nearby, an imposing man whoops with joy.
Just another night at Shuga’s.

Shuga Jazz Bistro has only been open for the last year and a half, but it’s with high energy and a beaming smile that Hank Linear circles the house and bar, while Ron McGowan hangs in the back, the quiet strength behind the scene, both of them attentive to the details that only club owners would understand. This smoothness is well-crafted and comes from experience and wisdom. It means that the patrons, blissfully unaware of all the work involved in creating this moment, stay focused on the music and the pleasure of their meals.

When partners Hank Linear and Ron McGowan speak of Shuga’s, their 30-plus-year friendship sits between them, easy as a comfy chair. Asked if he always wanted to manage a club, Hank steals a side-long glance at Ron and chuckles, “No…he twisted my arm.” Ron joins him with a laugh that emerges deep from within, like it’s always there, waiting to erupt at any time.

When asked where they met, they joke, “In a bar” (more loud laughter erupts). But in truth, their friendship was forged over many years of working together as parent volunteers and organizers at their daughters’ school, Renton High. Their kids were years apart in age and didn’t hang out together, but the two dads became close.

Ron’s “luring” of Hank into the business happened over time, starting with the original club, McGowan’s. Remodeled later into the current Shuga Jazz Bistro, Ron’s nightclub McGowan’s (1995-2005), was involved in providing food and drink for the now-defunct radio station KWJZ Jazz Festivals in the late ‘90s. A big task, Hank rolled up his sleeves and joined in the fun.

“Music is what drives me,” says Ron. “We love music. Period. We love jazz, blues, I like country, as long as it’s good, clean music, we love it. We run the gamut!”

And they do. Featuring artists like Josephine Howell, Lady A, Industrial Revelation, and the Sugaray Rayford Blues Band, Shuga’s showcases the Pacific Northwest’s wealth of talent across genres – and hope to attract bigger regional and national acts.

Food is their other main passion. When Ron and Hank started Shuga’s they brought on executive chef, Wayne Johnson, another community gem. Having been a contestant on the Iron Chef, and having showcased at the James Beard House in New York, he could easily sit on his laurels.

Like Ron and Hank, Wayne possesses their same spirit of service to the community. He divides his time equally between Shuga’s and FareStart, the community organization that helps people overcome barriers to employment by developing work skills to have lifelong careers in the food industry. Together, they fashioned a Southern-inspired menu that still contains restaurant standards that appeal to every taste: the distinctly Southern – hush puppies, fried catfish, shrimp and grits – alongside Northwest favorites like the Grilled Alaskan Sockeye Salmon, roasted mussels, and the Shuga’s Bacon Burger.

Ron and Hank strive for a balance between their mission of being both a dinner house and a jazz house. And the club is ideally set up to do both. The front is designed to accommodate diners only, where the live music is ambient background to the dining experience. Deeper into the club, a spacious bar gives folks the opportunity to both get cozy or have enough elbow room to lounge or even dance. Past that is the stage, with seating for 80 diners who want to get up close and personal with the music.

As Nathaniel Paul Schleimer asserts, it all speaks to the “friendly vibe that Ron has created,” with the “genuine hospitality of manager Hank and all the staff at Shuga’s.“

“We love a diverse crowd,” says Ron. “We want to provide a place where people can come to get a great dinner, good wines, cocktails and hear great music.”

And to those folks who’ve experienced it these last 18 months, they have.