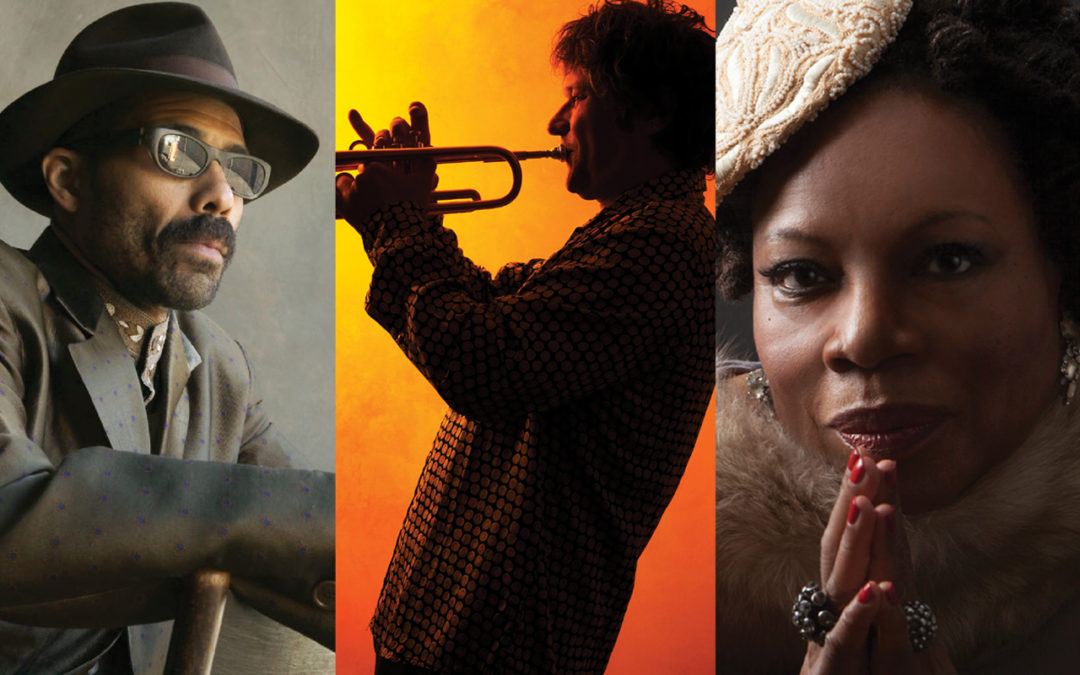 Earshot Jazz is pleased to bring you Sound in Motion, an extraordinary concert series that also promises to be a series of truly extraordinary concerts. Over the coming dark winter weeks, we are delighted to host many of the brightest creative spirits in today’s jazz: some old friends, some new friends, and a couple of extraordinary returning heroes.

Sound in Motion could also be subtitled “The Rising Tide,” because of the discernible elevation each artist delivers to the progression of the art form. This series is a great opportunity, at a great point in our collective history, to spend some time of an entirely separate quality, in the company of accomplished artists who move this uniquely American art form ever-forward through collective commitments to creative, individual expression. This is a clear-eyed showcase of the energy and expansion, heart and heartache, magic and momentum, truth and beauty of jazz, now.

Kahil El’Zabar has been one of the deepest and most forward-thinking artists from Chicago’s renowned improvised music scene for many years. Working in many creative contexts as a member of the boundlessly innovative AACM, El’Zabar founded the Ethnic Heritage Ensemble in 1976 with tenor saxophonist Edward Wilkerson, Jr., as a way to further explore the connections between African-American music, like jazz, with more traditional African instrumentation and rhythms. In the first years, the duo would frequently grow to a trio, adding musicians like saxophonist Light Henry Huff and Kalaparusha Maurice McIntyre. Touring frequently in Europe and the United States, they established a global reputation. In 1997 Ernest “Khabeer” Dawkins replaced Wilkerson and was first featured on a recording made by the Ensemble in 1999, Freedom Jazz Dance. That album included Chicago jazz legend Fareed Haque and continued the Ensemble’s tradition of music with a modern sensibility and an ancestral spirit. By 2006 Bowie’s spot was filled by young trumpeter Corey Wilkes, a highly regarded improviser with a soulful sound and unique sensibilities, informed by his emersion in music from jazz to hip-hop.

This Ethnic Heritage Ensemble includes trumpeter, Wilkes, baritone saxophonist Alex Harding, who has stepped in for an ailing Hamiet Bluiett on this tour, and the compelling presence of Kahil El’Zabar on drum set, hand percussion, and soulful vocalizations. It is a special opportunity to immerse yourself in a jazz experience as old, and as new, as time itself.

Trumpeter Vloeimans creates highly original music that has earned him the most prestigious music awards in the Netherlands, including three Edison Awards. Vloeimans tours extensively with a variety of ensembles: his acoustic chamber jazz trio Fugimundi; an electric project Gatecrash, which has earned a reputation as one of Europe’s top jazz/rock cross-over bands; and Oliver’s Cinema, the sweet, folk-influenced trio with accordionist Tuur Florizoone and cellist Jörg Brinkmann that made a lucky Earshot audience swoon with their gorgeous Chapel concert in 2014.

Holshouser has found a niche for himself as an accordionist, improviser, and composer. Holshouser studied composition with Anthony Braxton, and has toured and recorded with jazz violinist Regina Carter, Amsterdam-based improvisers Han Bennink and Michael Moore, modern klezmer clarinetist David Krakauer, pop visionaries Antony and the Johnsons, and the Brooklyn Philharmonic Orchestra. Holshouser also performs with groups of his own: Musette Explosion and The Will Holshouser Trio.

Myers arrived in Chicago in the 1960s, finding creative kinship with the AACM, and later recording her first album with free-jazz tenor saxophonist Kalaparusha Maurice McIntyre. Myers has since toured Europe with the Lester Bowie Quintet and Charlie Haden’s Liberation Music Orchestra, and has been commissioned by the Chicago Jazz Institute to compose and direct an orchestral work in honor of great pianist Mary Lou Williams. Myers has been honored by the National Endowment for the Arts and The New York Foundation for the Arts. Her new recording, Sama Rou – Songs From My Soul, derives a global sensibility from the idiom of the Great Negro Spiritual and moves it forward with “a predominately prayerful slow pace.”

“It’s probably safe to assume at this point that no other band working today can offer what Kneebody deliver,” writes Los Angeles Times.

Grammy-nominated quintet Kneebody generates explosive rock energy paralleled with high-level chamber ensemble playing, and highly wrought compositions balanced with adventurous no-holds-barred improvising. All “sounds-like” references can be set aside as the band has created a genre and style all its own. Made up of keyboardist Adam Benjamin, trumpeter Shane Endsley, electric bassist Kaveh Rastegar, saxophonist Ben Wendel, and drummer Nate Wood, each band member has amassed an impressive list of credits and accomplishments over the years while continuing to thrive and grow in reputation, solidifying a global fan base. Kneebody draws upon influences spanning D’Angelo’s Voodoo to music by Elliot Smith, Bill Frisell, and Miles Davis.

Happy Orchestra, produced by drummer Tarik Abouzied, is a band that puts smiles on faces and lights fires under feet. The band, nominated 2015 and 2016 Alternative Jazz Group of the Year by readers of Earshot Jazz, combines instrumental and compositional firepower with a determined effort at crafting an intensely happy musical experience. This combination of stellar human beings, instrumental mastery, and a grin-inducing compositional palette is what makes Happy Orchestra an unmissable act.

Tickets $12 advance / $16 day of show. Tickets are available at nectarlounge.com.

An established innovator, and, as a former Seattle resident, BF (before Frisell), mentor to an earlier generation of guitarists, Ralph Towner creates music with deep sensibility and a genuine passion for beauty. Best known as the lead composer, guitarist, and keyboardist for the enduring ensemble Oregon, a highly versatile group ranging from jazz and Third Stream improvisations to folk music, Towner has performed and recorded extensively around the world since its formation. He has also recorded as a leader and many other artists, racking up 29 releases on the respected ECM label. Towner is a prolific solo acoustic guitarist with a distinctive musical language. After critically lauded projects with trumpeter Paolo Fresu (Chiaroscuro) and with fellow guitarists Wolfgang Muthspiel and Slava Grigoryan (Travel Guide), Towner recently returned to solo guitar with his new ECM release, My Foolish Heart.

The captivating duo of pianist François Couturier and cellist Anja Lechner has also contributed to the quality of the ECM catalogue; Couturier, notably with Tunisian oud master Anouar Brahem, and Lechner with Tango master, Dino Sailluzi. Their collaborations over the past 10 years also include the Tarkovsky Quartet, celebrating the great Russian filmmaker Andrei Tarkovsky, with evocative music that somehow finds the texture of dreams and memory.

Any return of Aaron Parks to Seattle stages carries an air of “the prodigal son” to some of us. But this impressive trio setting – with the iconic drummer Billy Hart and top-flight bassist Ben Street – is epic indeed, especially on the heels of a major new release, Find The Way, on a major global label like ECM.
When the New York Times said that Aaron Parks was, “a step ahead of everyone else,” they were telling the rest of the world what we already knew. Seattle was fortunate to have Parks around for a couple of years as he dealt with his college education, roughly between the ages of 15 and about 17. When he was 18, in 2001, Parks took first place in the American Jazz Pianist Competition, and has since embarked on a musical career marked by technical brilliance and visionary artistry.

His first ECM release, the solo Aborescence, was praised by JazzTimes as “expansive, impressionistic…like a vision quest.” Find The Way, behind which this trio tours, brings Parks’ remarkable facility into harmony with his quest for beauty, and enhances it sublimely in the hands of two of the finest rhythm masters in jazz.

Pianist Craig Taborn was once called “one of the visionaries of the current wave” by DownBeat magazine, and has intentionally and successfully proven that point year after year. With a restless creativity that has taken him around the world in the company of many of the top names in jazz, Taborn has honed his vision into an utterly distinctive aesthetic. His seminal 2004 album Junk Magic was hailed as “a testament to jazz’s spirit of constant (re)invention” by AllMusic Guide. The distinguished ECM label released his solo piano sojourn, Avenging Angel, in 2011, followed by the 2013 trio release, Chants, with Gerald Cleaver and Thomas Morgan.

Taborn has performed for Earshot several times, including the notable piano duo with Kris Davis at PONCHO Concert Hall during last year’s festival. His brilliant new quartet includes long-time Minneapolis-area friend Dave King (of the Bad Plus) on drums, former Seattleite Chris Speed on saxophone, and Chris Lightcap on bass. All of the members of this exciting quartet are accomplished composers and veterans of an incredible array of musical expression.

Join the Miguel Zenón Quartet for a special masterclass at The Royal Room on February 28 at 3:30pm. Open to students / $10 for public

Internationally acclaimed saxophonist/composer Miguel Zenón celebrates the release of his new recording, Típico, his tenth as a leader. Joining Zenón are his long-time bandmates who are also featured on the recording: pianist Luis Perdomo, bassist Hans Glawischnig, and drummer Henry Cole.

A multiple Grammy nominee and Guggenheim and MacArthur Fellow, Zenón is one of a select group of musicians who have masterfully balanced and blended the often-contradictory poles of innovation and tradition. Widely considered one of the most groundbreaking and influential saxophonists of his generation, Zenón has also developed a unique voice as a composer and as a conceptualist, concentrating his efforts on perfecting a fine mix between Latin American folkloric music and jazz. Born and raised in Puerto Rico, Zenón has recorded and toured with a wide variety of musicians including Charlie Haden, Fred Hersch, and Kenny Werner, and is a founding member of the SFJAZZ Collective.

Típico is above all a celebration of Zenón’s longstanding quartet. Its focus stays closer to home, with nods to Zenón’s own personal and professional life as it zeroes in on what makes his band unique.

“I was thinking about what this band and the guys in the band mean to me as I was writing the music,” he explains. “I kept going back to this idea of us developing this common language that identifies us as a band.”

That language has been developing for more than a decade. Perdomo and Glawischnig have been with Zenón since the turn of the millennium; Cole joined the band in 2005. Their language is thoroughly fluent modern jazz, with all the instrumental prowess and rhythmic and harmonic complexity that that implies. But the dialect they’ve created together through the years is distinctive.