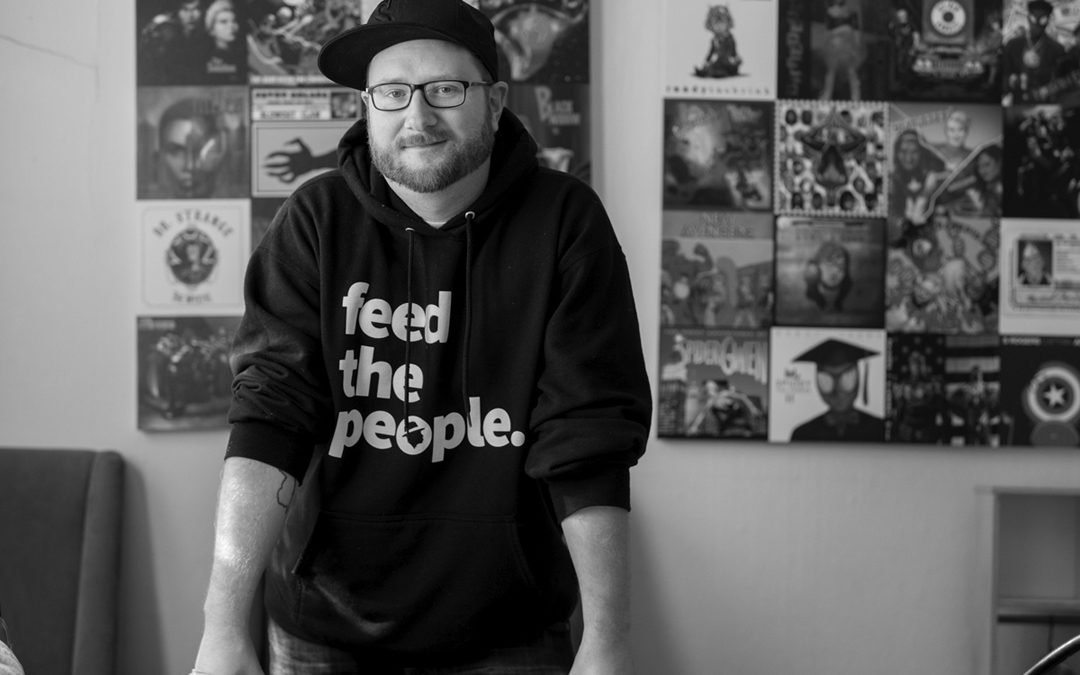 Spekulation is an East Coast-bred, Seattle-based producer/remixer, video artist, political provocateur, and (former) MC. A revered figure on the Northwest hip-hop scene, and well-known to a vibrant cross-section of forward-thinking jazz and creative music fans, Spekulation recently dropped his first proper release since 2016.

The Crossover Event is a brilliant instrumental journey touching on a wide swath of inspiration: freewheeling horn bursts, film score and electronic textures, funk, soul and timeless groove, and even comic books. Definitely not a mixtape of bite-sized random beats in search of a context or a willing rapper, the work is a tightly conceptualized and coherent album journey, cinematic in scope and deep in the pocket. Seasoned with an undeniable jazz vibe, The Crossover Event pairs Spekulation’s nuanced production with brilliant solos and textural contributions supplied by a choice cross-section of Seattle’s most forward-thinking creative instrumentalists.

Not merely a studio dweller, Spekulation can bring the vibe alive onstage in grand fashion. Upcoming shows will feature a superb 10-piece band with accompanying remixed animation and video, a jazz-groove-superhero-samurai throw down.

Earshot Jazz: The Crossover Event was entirely recorded in various home studios, by e-mailing audio files back and forth. How did you structure the process?

Spekulation: I set up the framework: 4-bar loops or 16-bar loops, that were verse-chorus-bridge kind of situations, but set up so that whatever you play over it, if it works in one place, it will work in another place, so I could just have a bunch of people record over it. Everybody got exactly the same files from me. …It was super low key.

The contributors didn’t know what the others were doing?

Yeah, nobody had heard any of the other’s parts, and nobody was ever in the same room. …A lot of the horn players I worked with were nice enough to do layers. Kate Olson in particular did two saxophones and a flute for every song, which is an amazing glue to get! …And all the people had played together in one way or another, so I knew their sounds would work. But yeah, it was cool to keep them completely in the dark!

Besides hip-hop, was jazz also a focus for you growing up?

The records, the hip-hop I grew up listening to, is all sampled from jazz music. So, once I hit 16 and started digging back through that stuff, I was like, “Oh, this is where it’s coming from.”

What were the defining artists/albums for you?

Nas’ Illmatic was the main one. A lot of Pete Rock and CL Smooth, Tribe Called Quest, De La Soul…That stuff was like church for me.

How did you tap into the Seattle jazz scene, and make it a part of your creative process?

I moved here 11 or 12 years ago and went to a jazz hang (The Hang at Lo-Fi). …That’s where I met that circle of people. I started out sampling their stuff …trying to figure out where the thing I liked came from, and how to do it. …They were all so accessible, and were stoked about being sampled, and didn’t have the East Coast “You’re trying to steal my stuff” vibe.

Both in recordings and your live work, you put a big focus on integrating hip-hop production techniques with live instruments. What are the challenges in that?

For me, it’s a matter of figuring out whether you’re playing hip-hop with jazz instrumentalists, or you’re playing jazz that does a hip-hop thing. The jazz that does a hip-hop thing doesn’t interest me in the least. The hip-hop with jazz players is the thing I want to do. Figuring how to get the sound right and get the feel of being at a hip-hop show, but still making the jazz kids feel comfortable enough that they can just show up and blow, that’s been my main mission in all this. Keeping the blindfold on them long enough that they’re tricked into doing the thing that they’re comfortable doing, but the subwoofer is still really getting worked, and there’s a lot of noise! [laughs] It’s about finding that balance. This record is the closest I’ve come to that.

Is there a stylistic heritage in both genres that makes that a special challenge?

There’s an appreciation for the loop that a lot of jazz kids don’t have, because in jazz it needs to be different every time. I’m like, “No, it has to be exactly the same every time, except for one little part that you can have fun with.” I find people that know how to pull that off, and get that, and you don’t have to explain to them…there’s a mantra thing that happens.

In 2016, you retired from rapping. Your decision puts a focus on issues that are a struggle for thinking people on all sides, not just in music, but in the culture at large. The ambivalence of appropriation, issues of cultural imperialism…

I believe even more today, that white people should not rap, period. I made the decision for myself, and people should do whatever they want, but if I was writing a textbook, that would be the title of it [laughs]. Production for me is a little bit different, but the rapping in particular, and putting my face, my body and my voice in the middle of something…It takes away, it’s a robbery of something.

It’s more about building a space, if that makes sense, than taking up the space. …That’s kind of what I’m about right now, setting things up, so other people can do a thing.