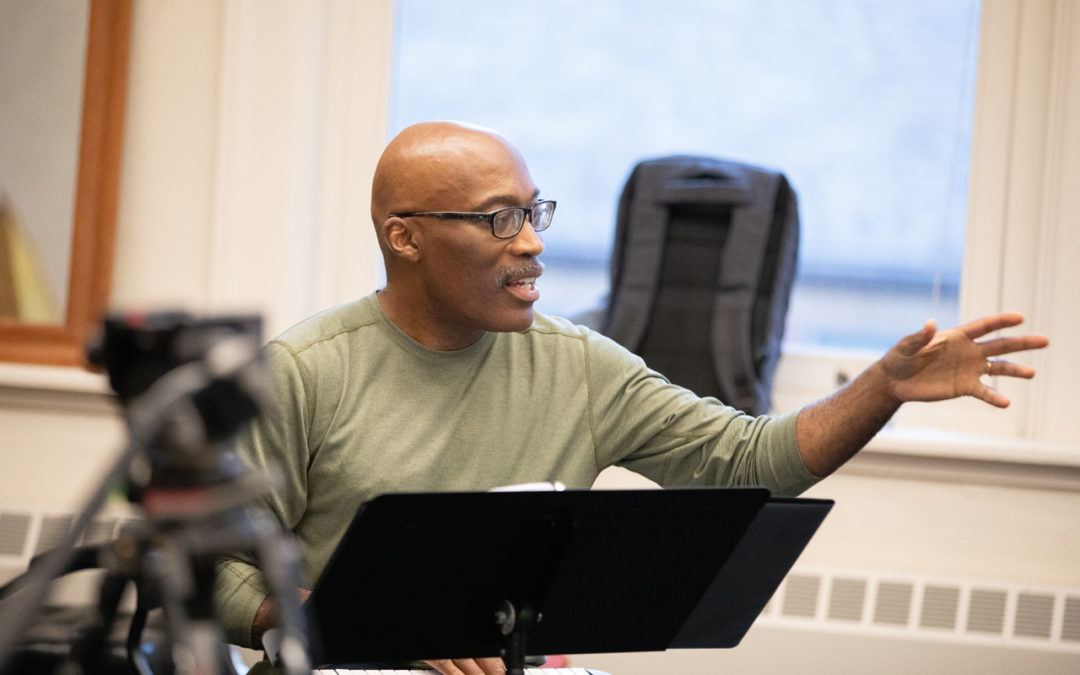 In 1960, the Albina district on the northeast side of Portland, Oregon was home to eighty percent of the city’s Black residents, lively with Black-owned businesses, churches, and stately homes. Decades later, the community of color that once thrived along the east banks of the Willamette River is long gone, replaced by the elaborate 30-acre sports and entertainment Rose district and a predominantly white residential area which is more expensive than 88.9% of the neighborhoods in Oregon.

From September 7-9 at the Veteran’s Memorial Coliseum, jazz pianist, composer, and Origin Records artist Darrell Grant will speak to the erasure of the Black community from Portland’s Albina district and the gentrification overtaking most American cities today, through a site-specific, interdisciplinary jazz opera, Sanctuaries, presented by Portland’s Third Angle Music.

Sanctuaries is the largest project Third Angle has taken on in their thirty-year history, and it was no small feat for the composer, either. Grant, a Portland-based and internationally-recognized jazz pianist who’s worked with legends like Betty Carter, says the very idea of creating a jazz opera challenged him. So much so that he almost refused Third Angle’s 2017 offer to do it.

“I just remember my disbelief, like, why would I do that?” said Grant. “But, then the reverse question kept coming up, like, why wouldn’t I do that? What is it that makes me, as a jazz composer, as a Black artist, feel like this is not for me?” he asked himself.

Intrigued by this inner turmoil, Grant began conceiving of and composing Sanctuaries, meanwhile becoming more aware of the rich history and contemporary tradition of Black opera and enlisting the talents of Los Angeles-based opera stage director Alexander Gedeon and librettist and two-time National Poetry Slam Individual Champion Anis Mojgani. The three of them, in collaboration with the local artists and community members, worked to tell this story in a way that addresses and reinvents opera’s historically white lens.

“I think as a vehicle…[opera] is really powerful, but the lens was never turned on the lives and stories of people of color except in a really exoticized way,” said Grant. “I wanted to use this vernacular sound and [jazz] expression…to tell the story. Not to be instructional to white folks. The point of this opera was to speak to our community and our people about ourselves.”

The history of redlining in Portland, specifically in the Albina district, has been told to Grant by Black residents since he moved to Portland in 1997. That said, it’s only just becoming widely-known to the city’s majority white population.

“This city is still grappling with this legacy of injustice that’s really now just coming to light. When I started writing this opera, these stories were unknown to a lot of the white people around,” remarks Grant. “A deliberate process defines the displacement, dispersal, and destruction of what was once a vibrant Black community, so that…seemed like a story worth telling.”

Sanctuaries has significance beyond Portland, too. Systemic racism persists throughout the United States, as evidenced by the murder of George Floyd, the hundred days of protests, and the pandemic, which has disproportionately impacted people of color. Hence, the last 18 months only adds to the heft of Sanctuaries, which was originally set to debut in April 2020 but postponed due to the pandemic.

“The opera is even more resonant [now],” said Grant. “It’s not something that’s informing people of something they don’t know. It’s reflecting on the history that we all have to face because we do know it. And that feels different.”

For more information and to purchase tickets visit rosequarter.com/event/sanctuaries.