Stuart Dempster: Putting the “Play” Back into Playing Music 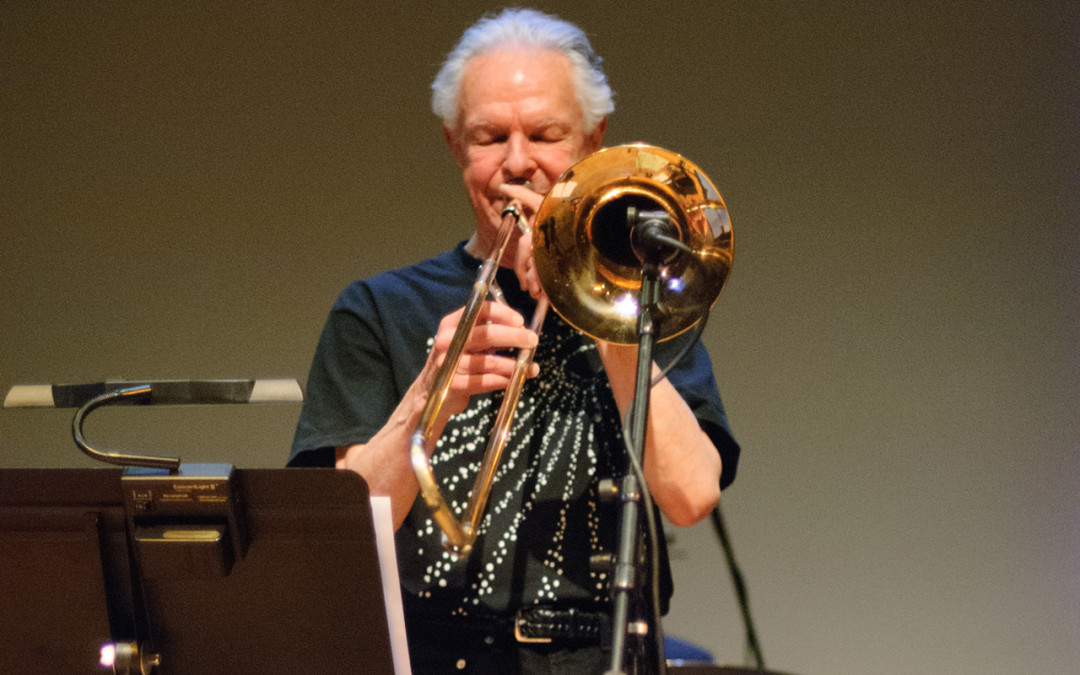 The Seattle area has no shortage of exceptional musicians and composers, spanning many genres, who have made compelling contributions to the artistic life of the region and beyond. But a shortlist for the very top echelon of achievers must surely include Stuart Dempster.

Even a succinct summary of Dempster’s accomplishments – spanning contemporary improvisation, extended instrumental techniques, global experimentalism, and cutting-edge compositional commissions, across the realms of education, performance, and recording – could still comprise a full-length documentary.

Dempster’s résumé includes big band jazz and a stint as principal trombonist in the Oakland Symphony. His performance journey includes crossed paths and collaborations with many icons of the 20th century experimental and “new music” scenes: John Cage, Merce Cunningham, Lou Harrison, Pauline Oliveros, and Terry Riley (Dempster participated in the 1968 recording of Riley’s seminal monument of minimalism, In C). He also was inducted into the Seattle Jazz Hall of Fame in 2009.

His influence as an educator is also broad and deep. Since 1968, he has been on the faculty of University of Washington, and his book The Modern Trombone: A Definition of Its Idioms is an unparalleled bible for players, an indispensable treasure trove of information on the instrument’s capabilities, including extended techniques and “Theatrical Implications.”

For all his accomplishments, what is most singular about Dempster is his ability to connect with listeners and find the elemental joy and wonder in musical communication. With a twinkle in his eye, he can easily transfix an audience with nothing more than a conch shell.

I recently spent time with Dempster at his home, and while he was simultaneously making tea, rustling through sheet music, telling stories (in multiple accents), and generally being charming and funny, he spoke further about the notion of music as play, and why it’s a worthwhile goal to let humor and warmth come through.

“My motto is put the ‘play’ back into playing music. … There’s always that mentality that, ‘Oh, if you’re funny, you can’t be serious!’ and ‘You’re serious? Well, then you can’t be funny!’”

Dempster’s sly smile and sense of mirth belies his belief that you can be serious, you can even be somber, but there should still be an element of joy and humor in that audience connection.

“Something that’s interested me so much in my own career is that if I’m not having a good time, the audience isn’t either. And a lot of that is trusting the audience.”

“I like to say that my music is the best when it’s equally appealing and appalling [laughs]. …That’s my favorite place to be. And the same balance between seriousness and humor – if I get right on that edge, then I feel very good about that.”

Dempster’s role as an educator and mentor colors his ideas about musical life as well. He shared an impactful story of when, as a high school student, he met early jazz trombone legend Kid Ory:

“I knew he was some kind of a significant figure, but little did I know then that he was in on the birth of jazz; that knowledge came later. I could feel a special presence, however, in his demeanor and support of us young ‘uns, and look back on that ever so brief meeting with fondness and respect. I still feel that deeply…”

Dempster’s supportive and nurturing presence is felt similarly deeply by generations of musicians in the Pacific Northwest, and his upcoming Cornish College of the Arts residency (and de facto 80th birthday celebration) called StuART Fest will be a chance to explore and celebrate his contributions. Cornish faculty member and French horn virtuoso Tom Varner, whose Creative Ensemble student group will tackle Dempster’s composition Milanda Embracing, had this to say of Dempster: “His humility, humor, generosity, and artistry made me think, ‘I want to be this guy when I grow up!’”

Described as a “special event honoring some of Cornish’s past and present, and a look into the future,” StuART Fest will also feature Dempster in improvisational duos with Janice Giteck, William O. Smith, and fellow trombone legend Julian Priester, as well as a solo piece performed by flautist Paul Taub.

Any chance to see the local treasure Stuart Dempster is not to be missed. It may be hilarious, it may be sublime – it’s “play” time that will teach you about the joys of shared silence, listening, and human emotion – and that’s always time well spent.