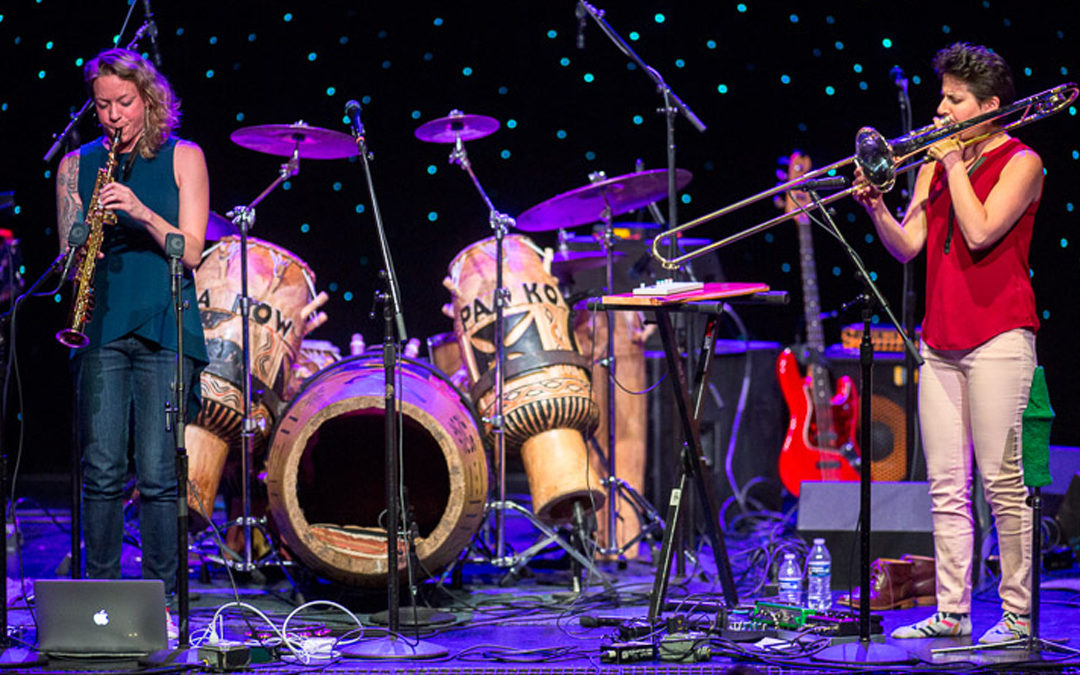 Catching up with Kate Olson and Naomi Moon Siegel is like running at a full sprint, finally catching up for a few out of breath words, before blasting off as a projectile of immersed energy. Their eclectic duo Syrinx Effect seems to be a residence of new focus, to strip away the preconceptions and impulses of their different projects. The intersection of saxophone, trombone, and an unexplored electronic canvas has provided an abstract poetic base to pursue textural and melodic outbursts, influenced by the ambient sounds of the world around them.

Olson and Siegel met at the renowned Racer Sessions and developed a musical relationship that has produced three experimentally constructed EPs. On February 9, Syrinx Effect released their first full-length album, A Sky You Could Light a Match On, on vinyl and download. The record has a free-flowing feel to it, utilizing melodies, counterpoints, and image-conjuring textural landing spots. Drummer Eric Eagle joins to add another layer to the sonic mix.

“We are showcasing our ability to write folk melodies, to have beautiful sounding counterpoint, intentional counterpoint, using the full range of our instruments. To create a bigger sound,” says Olson, in part revealing her background in classical saxophone that is a core component of her overall sound and approach.

Her musical education path led Olson first to classical music, and then jazz, following an upbringing that saw her formative years in Wyoming. She received a classical undergraduate degree, eventually ending up at the University of Michigan, earning an M.M. in Improvisation. It was there that Olson studied in part with Geri Allen, an influential component of her mentorship in Ann Arbor.

“When I was at the U.M., I got to study with Geri Allen, and that was really inspiring,” recalls Olson. One lesson from Allen struck a prominent chord in Olson’s musical outlook, when Allen stated, “You want to play pretty all the time because that’s what society tells you you’re supposed to be, but life isn’t pretty all the time—you have to play the dark parts.”

Meanwhile, Siegel’s jazz roots, revealed on A Sky You Could Strike a Match On, took shape while at the prestigious Oberlin Conservatory, where she earned a degree in Jazz Trombone Performance. During her senior year there, the rumblings of what was to come musically for her began to rise to the collective surface.

“My senior year I attended a weeklong workshop at the School for Improvised Music which opened up my music world tremendously and helped me find access to my individual voice more than the bebop, and mainstream jazz that was emphasized at school,” recalls Siegel.

The duo appeared at the Earshot Jazz Festival in October in a night that showcased their multi-genre talents, opening at the Columbia City Theater for New York-based, Seattle-bred saxophonist Roxy Coss. While the work of Olson and Siegel within Syrinx Effect is thought of as being somewhere out on the edge, an adventure in the avant-garde, Coss, on the other hand, is considered an innovative voice in a more post-bop sense. In art, things are not always what they seem, and that reality was put on display that evening within the warm, brick confines of that historic neighborhood venue. What the audience saw was strong musicianship, the artists drawing from different quadrants of the jazz tradition, intersecting at points that unify all forms within the jazz universe—the emotional cry of the blues.

Beyond breaking down genre barriers, Olson and Siegel are clearly seen as positive role models for young, aspiring female musicians, in a time when gender barriers appear to be falling in the jazz community.

Olson’s upbringing in the Midwest and Wyoming did not put her in the most progressive environment to chance upon the art form, yet still, she has emerged in a positive and strong way.

“A lot of my success is due to the fact that I am completely oblivious to gender roles, and gender bias. I grew up in Wyoming where I was always the only girl,” she says.

Siegel, in her time both in Seattle and now her new home in Missoula, Montana, has taken an active approach to gender equity in music.

“I’ve been spending the last 18 months working on addressing intersectional gender issues in jazz and music education via facilitating workshops and presentations with musicians, music educators, and music students,” says Siegel. “I’m currently in the process of exploring having this social justice work in music be a part of my creative process and serve for more music making.”

What is to come further down the road for Syrinx Effect is up in the air, dependent on the collective musical experiences of both members of this multifarious duo.

“It’s fun to have a partner to lose your ego with. To be on the same page with just one other musician. One stream of input,” says Olson.

That same page is forever turning over, finding new and fresh narratives to express in unity.

For more on Syrinx Effect, and to hear their new album A Sky You Could Strike a Match On, visit syrinxeffect.com.