Tarik Abouzied: Get Happy, Get Funky 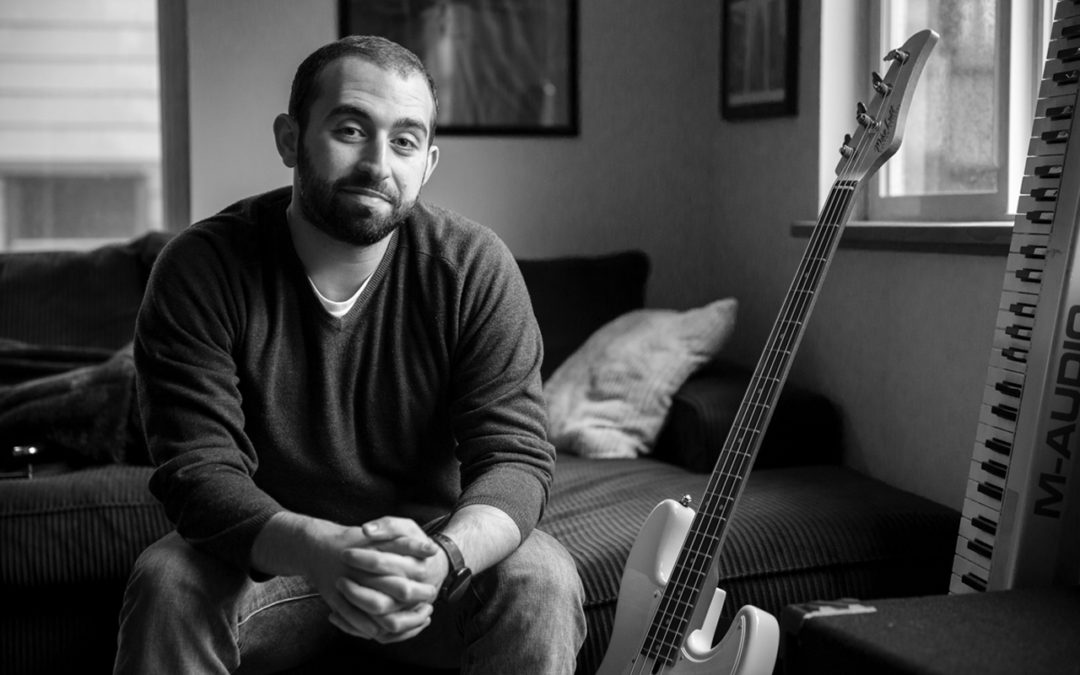 Consensus on anything in our modern world can be elusive, but in the realm of Seattle music, there is a universal maxim: One way or another, Tarik Abouzied will put a smile on your face. A phenomenally funky drummer, with taste, feel, and chops to spare, Abouzied elevates every band he’s a part of, providing gems for breakbeat hunters for years to come. With humor and humility, he achieves a deft balance, exploring the technical and intellectual challenges in music while still forging a deep emotional connection with the audience.

As co-conspirator and frequent employer Joe Doria tells it, from their very first show together, “Tarik was on top of the music, and each show after he would push it further into some amazing territory.…He’s a complete musician, not just a drummer.”

Earshot Jazz: What’s the status of the Happy Orchestra project?
Tarik Abouzied: The Happy record is half done and should be finished early next year. My hope is to keep writing, putting out music, and get the band to the point where our playing is at the height of its potential and touring is sustainable. It takes a long time to get there with a six-piece band, especially given how in-demand those musicians are, but the overwhelming satisfaction you get from a show where everyone in the band is synced musically, the crowd is right there with you, and you get home a little less poor is what keeps me going.

Talk about your approach to writing for the band. What inspires you?
I’m always thinking about trying to keep the music uplifting and digestible. I’ve written a lot of aggressive, angular stuff in the past that’s great for the jazz nerd demographic but doesn’t have a whole lot of use for anyone else, so I’m trying to avoid that. I generally sit down to write with a concept or fragment in mind that I picked up from something I heard or saw the week before…even non-musical things like the way one of our regulars at shows dances or the extremely graphic texts Tiger Woods sent to his mistress.

You’re celebrated primarily as a drummer, but you play many other instruments too, including superb bass.
The fact that I perform on drums predominantly is almost a fluke, mostly rooted in the fact that, of the instruments I play, it has the lowest threshold of knowledge before you can start playing along with records and other people.…It’s really the tonal aspect of music, melody, and harmony, that gives me goosebumps and drove my wanting to commit myself to musicianship. I was listening to a ballad on a Ray Brown record when I decided to become a music major, not a shredding drum solo.

You recently were planning a move to New York, but thankfully for us, have decided to remain in Seattle for the time being. What’s your take on the Seattle scene?
There’s a lot about Seattle music to be in love with. Aside from the natural beauty of this place, we have an incredible breadth of creative music and some key people like John Gilbreath [of Earshot Jazz], the folks at KNKX, Andrew at Seamonster, and others who do a lot to keep it going. But there are shortfalls too. I don’t think local live music is valued very much by the average person here, or is as built-in to daily life as it is in places like New York or New Orleans.

Humor seems to be an important part of your outlook. How does that inform your music?
I’m into comedy and comedians as much as I’m into music and musicians, and the overlap between the two worlds is strong. Musicians and comedians have the same job in a way, to get around a person’s defenses and confront them with something they wouldn’t expose themselves to otherwise, and I’ve learned a lot from my favorite comedians about how to go about that.

As a working musician, what’s your take on the current state of the industry, and how technology has affected the art form?
The huge downfall I’ve noticed from music tech is how far down the value of music has been driven by streaming. When a person can pay $10/month for on-demand access to virtually every recording in history, I think it affects how that person chooses to spend money on music in other ways. I’ve seen people scoff at a $5 cover and order a $12 shot of booze in practically the same breath. Does it make sense that having month-long instant access to the collective work of millions of artists would cost less than a few ounces of liquid?

Happy Orchestra will have a residency at Nectar every Tuesday night in December.