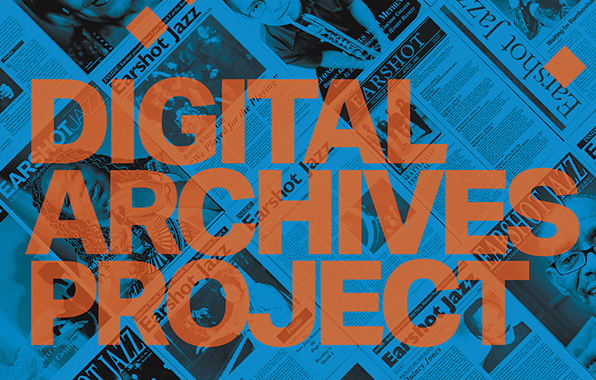 Whether you stumble upon it in coffeehouses and newsstands, or in living rooms and nightclubs across the city of Seattle, the general public has been informed about the jazz non-profit Earshot Jazz. The small printed magazine lying inconspicuously about with a cover adorned with one of the city’s musical bright lights has always been more than what it seemed. Throughout the years, the print edition has been seen in the company of free iconic Seattle publications, such as The Stranger, The Seattle Weekly, and The Rocket. In the electronic age, it has gained remarkable value, presenting Earshot to those who were not actively searching for it. Its sublime randomness has attracted and informed jazz fans of Earshot and spotlighted community jazz events since 1984, resulting in the printing of over two million copies to date.

Starting out as a jazz society newsletter in December 1984, the first edition was a single sheet of paper featuring bassist Rufus Reid on the cover. Founders Gary Bannister and Paul de Barros had decided on the name Earshot Jazz, aptly titled to inform the public within earshot of Seattle and the greater Pacific Northwest of local jazz happenings. The duo wanted to create something that would bring the community together to recognize and celebrate a living history of one of the most vibrant jazz scenes in America.

“I was inspired by the Oregon Jazz Society newsletter—that was the model. I didn’t like the sound of ‘Jazz Society,’ I wanted something that was more engaged in the actual making of music, rather than something that sounded like a bunch of old fuddy-duddies listening to records,” recalls de Barros.

Bannister and de Barros came up with the magazine’s iconic slogan, “A Mirror and Focus for the Jazz Community”—a standard that governs the ambitions of the magazine to this day. Thirty seven years later, the magazine continues to tell the stories of the Seattle jazz community in a deep, detailed, and loving manner. From the city’s storied high school programs to profiles of Seattle’s jazz elite, the magazine is a fascinating plunge into the current activities and personalities that drive this rich scene. With a national subscription base, the magazine has a reach far beyond the region.

While most arts organizations have halted print editions in favor of a digital only format, Earshot has offered members and the general public both. Upon the arrival of the COVID-19 pandemic, Earshot had to consider all of its outgoing expenses, including the value of continuing to release the popular print magazine. However, in many ways the extenuating circumstances illuminated the importance of the monthly publication. “We reaffirmed our dedication to printing the Earshot magazine. A few years ago we did some focus groups in the community, reaffirming how cool it is to have the Earshot magazine in paper from around the city, profiling and holding up Seattle artists on a monthly basis,” says Earshot Executive Director John Gilbreath.

In 2005, Gilbreath expressed an ambition to create a digital archive of the magazine starting with that very first single sheet edition from 1984. He intuitively sensed the value of such an undertaking, imagining the multiple benefits for the community.

That spark of an idea was broached time and time again over sixteen years until it finally came to fruition when Earshot received a grant from the Andrew W. Mellon Foundation on January 1, 2018. The original notion was to offer the archive solely through Earshot’s website. Though, shortly after, the Seattle Public Library (SPL) was informed of the archive project and the newly awarded grant. After some conversation, the two organizations came to the decision to present the three decades of the magazine through SPL’s Special Collections online resource. The Library was eager to engage in the community partnership following the success of their informative dive into Seattle’s jazz culture with the 2017 exhibit, Rhythm in Colors.

Earshot’s Managing Director Karen Caropepe and Archive Project Manager Lucienne Aggarwal then met with SPL’s Jade D’Addario and John LaMont in June of 2018 to explore what it would take to digitally host the entire collection. While past editions would be chronicled, the project would continue to be active moving forward, with each new edition being added monthly. By the end of that summer, the partnership had a Memorandum of Understanding, identifying partnership details and expectations. Earshot would digitize the collection with a third party vendor and send the files to SPL. The files would then be uploaded and made available to researchers, library patrons, and the general public. Additionally, Earshot would supply PDF copies and metadata for future editions.

“My job was thinking through how the project might happen,” recalls Aggarwal. The partnership with SPL widened the scope of the project, increasing its potential to reach more readers. “That really helped, because now we had a partner. We had a destination for the magazines.”

In April 2019, Earshot tapped University of Washington alumni Sarrah Trapp and DePaul University alumni Samia Faour, who specialized in library sciences and journalism respectively, to begin the tedious work of creating the archive. Earshot then chose USArchive & Imaging Services to digitize the collection.

By fall of 2020, Earshot had sent the digitized files to LaMont to begin the work of reviewing scans and other metadata provided. He then began to upload completed files in October, a process that continues today. In February of 2021, Trapp, now a graduate of the UW’s Master of Library & Information Science program, continued on the project, working with LaMont to finalize any outstanding issues on the index terms.

Earshot Jazz and Seattle Public Library released a joint press release on June 24, announcing the launch of the archives project for July of 2021. Though the archives had a soft release in late April, July 1 officially enables full access to the remarkable 37 year legacy the magazine has achieved.

For those conducting research, or simply exploring their passion for jazz within the context of Seattle history, the archives provide a resource that prior to its release, was limited to paper editions and random entries online. When de Barros was doing research for Jackson Street After Hours, his definitive work on Seattle jazz history prior to 1960, he had to struggle through endless piles of print editions. Currently, he is working on a sequel, chronicling the Seattle jazz scene from 1960 to present day, a task made much easier with the release of the archive. “Going through a pile of print newspapers is exhausting, and often incomplete. I spent six months going through print editions of the Seattle Times when I wrote Jackson Street, just trying to find out if Bessie Smith ever played here. Now you can figure that out in a few seconds,” remarks de Barros.

For the general public, the archive provides easy access, historical accuracy, and a lens with which to learn about and feel the vibe of jazz culture in and about our city. With the passing of each generation, young musicians can access the legacy they are choosing to become a part of, and the high standards they pledge to uphold. It gives greater context and meaning to experiencing Seattle jazz in the present. For the many who have contributed to the magazine over the years, the archive brings with it a validation of their efforts. Gilbreath notes, “It has been a labor of love for many—many writers, editors, and people involved in producing the thing, who are so much a part of the legacy—giving the voice to the magazine over the years.”

The collaboration between SPL and Earshot Jazz comes down to a celebration of sorts—a joyous acknowledgment of who we are and who we choose to be as a community. It is just as well a glance into our past as it is a focused gaze into our future.

← Carmen Staaf Letter from the Director →