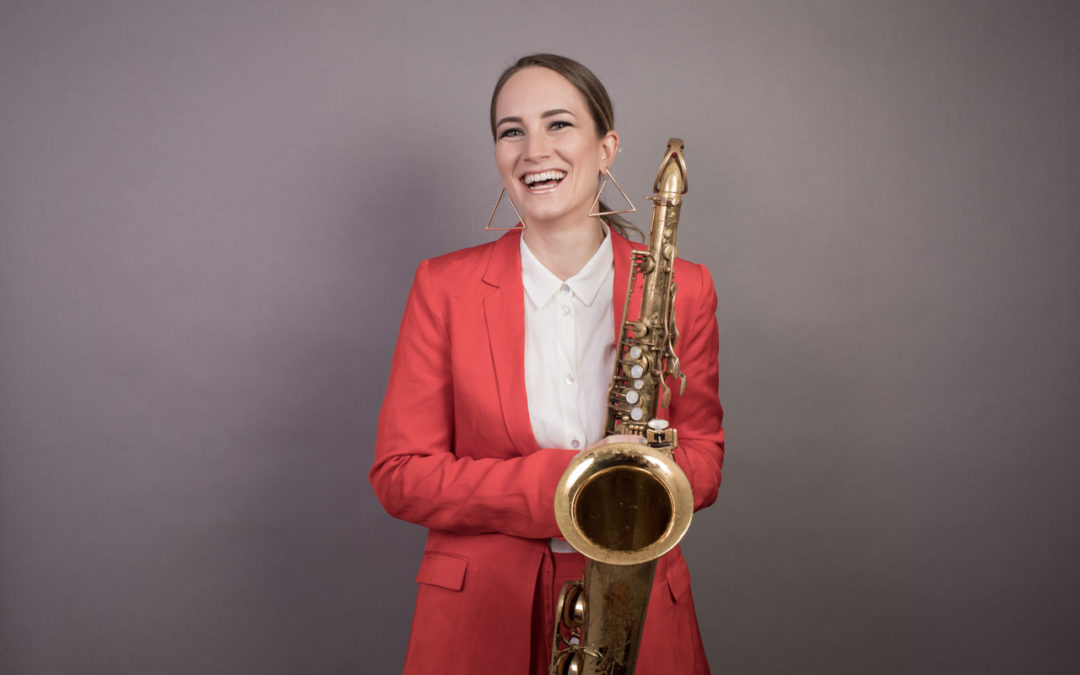 On April 2, The Associated Musicians of Greater New York, Local 802 AFM announced that the Roxy Coss Quintet is the winner of the union’s groundbreaking Emerging Artists Project (EAP). The four-year grant program, launched in association with the Orchestra of St. Luke’s (OSL), is designed to help artists firmly establish themselves in New York City. The aim is to assure all musicians can afford to live, work, and raise a family in New York.

The competition received submissions from 52 ensembles comprising over 400 musicians. These submissions were evaluated by a distinguished jury of professional musicians including jazz composer Maria Schneider, vibraphonist Stefan Harris, and clarinetist David Krakauer.

Coss, the New York-based saxophonist/composer and bandleader, was born and raised in the Columbia City neighborhood of Seattle, and was a member of the nationally lauded program at Garfield High School, under the tutelage of Clarence Acox. She left some 13 years ago to pursue her jazz dreams in New York, first studying at William Paterson University in New Jersey. She has gained considerable renown for her work with trumpeter Jeremy Pelt, and the release of four well-received albums. Her latest, The Future is Female (Posi-Tone, 2018) with her working quintet, is a quantum step forward musically for Coss, as well as expressing her work to achieve gender equality in jazz and beyond.

“Our ensemble is thrilled that we’ve been selected,” says bandleader Coss. “The Union is making a huge effort to be more inclusive and relevant to current, younger musicians on the scene in New York City. Many of the current Union Members are older, and primarily play classical and Broadway music. To include a jazz ensemble for this project, makes a loud statement of their support for jazz musicians and other young musicians who currently don’t benefit directly from the Union in more traditional ways.”

The grant of $40,000 is allotted at the rate of $10,000 per year, and assists band members in terms of salary, health care, pension, promotions, and all aspects of being a working musician in the challenging financial environment of New York City.

“Musicians across New York City know how difficult it can be to for an emerging ensemble to get a firm foothold in the industry and make a living, but this grant is going to go a long way towards helping us thrive,” says Coss concerning her working quintet.

Coss has created a distinctive sound with her band, featuring guitarist Alex Wintz, pianist Miki Yamanaka, bassist Rick Rosato, and drummer Jimmy Macbride, all of whom are currently based in New York. Having a consistent working quintet has enabled Coss to get deeper into her original compositions, without the burden of constantly reteaching them to new band members. This grant is a giant step towards each member committing fully to the band, knowing a fair wage awaits.

“Part of the goal with this grant is that it will be easier for the members of my ensemble to commit to my gigs in the future, if they know there is at least a minimum fair wage and terms that will be implemented,” she says. “And hopefully this grant eventually allows us to fill out our touring schedule more fully, so we can move toward being a band with more of a full-time performance schedule.”

One of the benefits of the grant is receiving opportunities and resources to record and rehearse at The DiMenna Center for Classical Music, provided by OSL. While OSL is a classical ensemble, they have an eclectic view of the musical world, having such diverse performance credits as Sting’s Rainforest Fund Benefit, and Pat Metheny’s A Map of the World (Warner Bros.,1999).

“For us, bringing a jazz group enthusiastically into the union fold is a huge plus,” she says. “We, as a union, are looking for ways to serve a new community of musicians in a rapidly changing business. Jazz is a genre in which we have historically had little coverage. In this regard, the Roxy Coss Quintet is an ideal winner.”

While Coss has shifted her base of operations to Gotham, her roots in Seattle are firmly in place. She often returns to visit and perform, and deeply appreciates the support the Seattle community continues to offer, more than a decade since her departure for New York.

“I feel very fortunate that my hometown is Seattle. Not only is it a great city in general, it has a focus on the arts and community, with science and critical thinking at the foundation. It also happens to be a great city for music and jazz. I love the fact that Seattle has so many different mini-scenes, where everyone has a place to explore their unique styles and visions. I think this value and ideal was ingrained in me from a very young age,” says Coss in reverence for her native digs. “I am also grateful I had so many wonderful teachers and mentors growing up in Seattle, and that the support continued on even when I left home. When I return, there has been an ongoing sense of educating, supporting, collaborating and enriching.”

As her star continues to rise in the jazz community, her work to achieve gender equality in jazz and provide mentorship for young female musicians is enabled. Coss sees gender equality as a platform for the music to evolve, and for new audiences to be engaged. Simply put, the music is better for all people, both male and female. In Seattle, young musicians have been the beneficiaries of her vision.

“I have worked a lot with the local jazz programs in the area, and become part of that vital community and training ground that feeds the national jazz scene. I have also had many opportunities to perform when I return, and therefore naturally evolve within that same scene from a student to a professional and mentor. I hope that I not only serve as a role model to young girls in the community, but also to the boys who can see a woman be a powerful voice on the scene,” states Coss with purpose.

While many of Seattle’s brightest stars on the resident scene have journeyed to New York and returned, Coss finds the pace of New York City to her liking, and, in a way, carries the torch of Seattle jazz music forward. Her vision has been given a fresh jump start with the EAP award. How the Roxy Coss Quintet utilizes its current momentum will be interesting and fulfilling to witness moving forward.