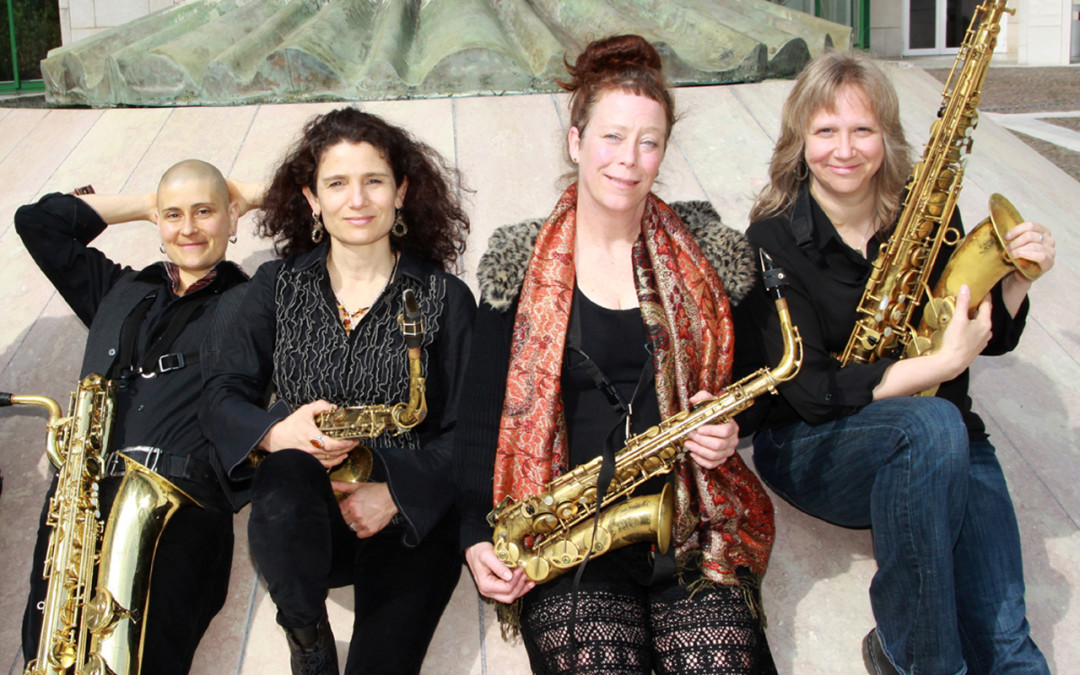 “It rains so much here, people are forced to be creative to avoid depression.”

Amy Denio is not the first Seattle artist to make this quip.

For years, and in seemingly every interview with a musician from the Pacific Northwest, people have tried to pinpoint just what about Seattle lends itself to producing some of the most creative artists of the last few decades. But while the rain may force many to stay indoors, passing the time in a variety of ways, Seattle native and bicoastal artist Jessica Lurie thinks it’s more: “It’s perseverance.”

For more than two decades, Lurie, alongside Denio, Sue Orfield, and Tina Richerson, has been part of the genre-busting, longstanding all-women saxophone quartet, The Tiptons.

It all started with a phone call in November of 1988.

Marjorie de Muynck, a saxophonist, rang up Amy Denio and said she wanted to start an “all-girl saxophone quartet.”

“Why not play all sax, all the time?” she asked Denio.

And so, billed as Phlegm Fatale (“We had exactly one concert with that name,” says Denio, “at the Wildrose, on Capitol Hill. We drew a huge crowd!”), four women began to play, classic jazz arrangements at first, before venturing into original compositions.

Just months later, the news broke that celebrated saxophonist Billy Tipton had died, in his longtime home of Spokane, Wash., and the world learned that he, in fact, had been born anatomically female. Tipton, initially feigning being male to earn a spot in a jazz orchestra, went on to live a full life as a bandleader and talent booker, a husband and father – a life lived, in essence, due to his perseverance.

Upon learning his story, Denio reached out to Tipton’s son John to ask permission to use his name, and the Billy Tipton Memorial Saxophone Quartet was born.

After several lineup changes and a brief hiatus, the BTMSQ, shortening its name to The Tiptons, eventually reformed in the early 2000s. Its current roster of Amy Denio (alto), Jessica Lurie (alto and tenor), Tina Richerson (baritone), and Sue Orfield (tenor) has now been together for nearly a decade. The group also employs a fifth member on drums, a position that Seattle’s Tarik Abouzied has filled their past few tours.

“Seattle and its people have the ability to be really groovy, there’s this sense of spontaneous composition,” says Lurie. “People are really listening, and shaping what’s happening.”

Originally a Seattle-based band, three of the quartet have since scattered: Orfield went back to her roots in Wisconsin, Richerson now makes her home in New York City, and Lurie splits her time between coasts. But they reconnect frequently to play gigs, rehearse, or record (as they plan to do this summer, after a European tour).

This month, The Tiptons embark on a West Coast tour, kicking it off March 6 at the Tractor Tavern in Ballard. The night also features a solo performance by Crystal Beth (aka Beth Fleenor of Crystal Beth & the Boom Boom Band), as well as the Full Fathom Five (+1), a collaboration recently formed by Lurie with Kate Olson, Naomi Siegel, Skerik, Evan Flory-Barnes, and D’Vonne Lewis.

A homecoming of sorts, each member of The Tiptons says she is looking forward to the evening.

“It’s gonna be ridiculous,” says Lurie. “I’m looking forward to all of it, it’s going to be super joyous and musically amazing.”

“The beautiful thing about this group,” adds Orfield, “is we can get together and play with very little rehearsal, since we’ve been playing together for so many years.”

Though there’s physical distance between the members, The Tiptons have a closeness that Tina Richerson describes as “a cross between my sister and my wife – sisterwives!”

“I feel very blessed to work with such incredible musicians and human beings,” she says.

The love these women have for each other is unmistakable in their shows, where one can witness the quartet’s high energy, playfulness, camaraderie, and superb talent.

“People often comment that it’s interesting, since we’re an all-women quartet, we stand much closer together than men do, and there’s a repartee and communication that’s palpable,” explains Denio. “Since we don’t see each other often, when we finally do get together in the same room, there’s this explosion of sound and emotion and satisfaction that we’re doing this thing right.”

“We just adore each other,” she adds. “I think it’s important to young women to see that.”

Denio comments that, at least in Seattle, there aren’t too many women-only groups in jazz: she cites Seattle Women’s Jazz Orchestra and Syrinx Effect (Naomi Siegel and Kate Olson).

But far be it to say there’s no place for women in jazz. All-women and women-led ensembles are woven into the fabric of this community: The Tiptons, and the musicians sharing the Tractor bill, prove just that. These women are doing what Billy Tipton was originally unable to do simply based on his gender.

And The Tiptons plan on persevering.

Catch The Tiptons on Tour

← Education, Community, and Inspiration: The Tonic of South Seattle’s Jazz Night School Letter from the Director →