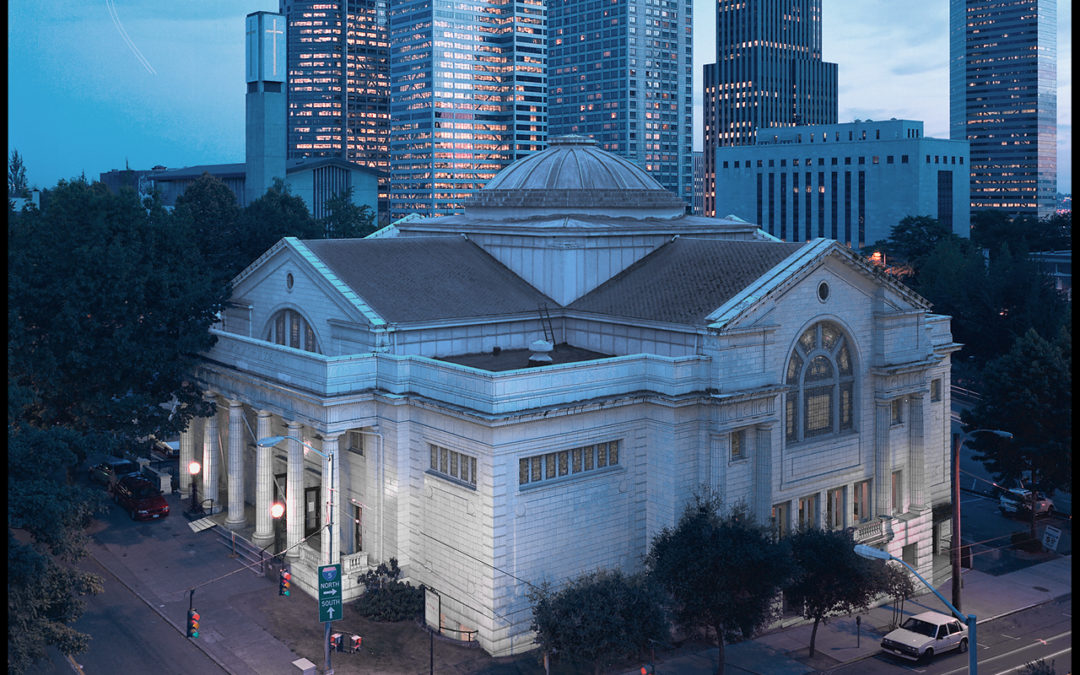 For two years, one of Seattle’s beloved cultural institutions was closed for renovations. Town Hall Seattle’s programming returns home to the former church on Eighth and Seneca.

Built about a century ago as a Christian Science Church, the historic landmark preserves the sacredness of the space, albeit in a more secular manner. The point is still to bring people together, to form community through shared experience, something the nonprofit has done since its founding in 1998.

Those familiar with Town Hall will find a lot just as they have known it—the Great Hall still holds its original splendor, made more so by state-of-the-art sound system upgrades to improve resonance. Historic pews remain in a half moon ripple around the stage, illuminated by the original stained glass pouring in from the windows and ceiling dome.

A large part of the building’s history will now be visible. Formerly hidden behind wooden lattice on the Great Hall’s stage, a massive wooden organ—dormant since its days as a church—has been given new life. The pipes are repurposed throughout the space, made into sculptures, seats, and bar tops; the landmark’s history entwined with its present.

The nonprofit’s mission is one of accessibility and representation, and the space has become more dynamic to further serve this purpose. There are now three venues within the space— the Great Hall, the Forum, and the Reading Room.

“We want to be a resource to the community in as many ways and as much as we can,” Jonathan Shipley, Associate Director of Communications for Town Hall, told Earshot. “Three different spaces with three looks and feels means we can cater to more rental partners.”

The Reading Room seats 75 and is intended for intimate community events, from poetry readings to meetings. A subterranean library, bar, and modular event space dubbed The Forum (formerly known as Downstairs) seats about 300 and makes up the majority of the basement, offering a second entrance to Town Hall.

Renovations, some obvious and others not, included seismic retrofitting and making the entire space ADA accessible. Additionally, 17 brand new gender-neutral bathrooms are available on the first floor. BuildingWork designed the $33 million renovation and Rafn Co. is the general contractor.

Town Hall programming didn’t cease in the time since renovations began—the organization became nomadic through its “Inside/Out” series, holding events in more than 40 different venues around the city.

The summer has been a “soft launch” for Town Hall, with events mostly occurring in the new event rooms, but September sets the stage for Homecoming, Town Hall’s 28-day grand opening. Featuring more than 40 events, it’s a marathon of musical performances, lectures, readings and workshops, that will christen the space. Other notable Seattle cultural institutions are coordinating events, as well, including Elliot Bay Books, Seattle Arts and Lectures, and Earshot Jazz.

Town Hall has taken this facelift opportunity to involve artists in the development of the space and the programming within. Sculptures, lecterns, furniture and murals were designed and created by local artists and artist-in-resident HATLO will have an artist takeover, infusing every part of the building with art and performance. Seattle-based artist group Electric Coffin is creating signage for Town Hall. Entering the main vestibule, patrons are met by an art deco mural of roses crawling up the walls that will display the names of donors. Seattle multi-disciplinary artist and woodworker Timothy Firth designed and built a resonant sound sculpture, walnut tables, and a modernist cherry lectern for the Reading Room.

Town Hall is positioned on a busy street that’s getting busier—the former parking lot south of Town hall is becoming two residential towers in 2021 with commercial space at the ground floor and a greenway that will be used for outdoor events and is seen as an extension of Freeway Park.

The Homecoming Festival starts on September 2 with a celebration of Labor Day featuring a reading from local author Alex Gallo-Brown from his new book of poems and stories Variations of Labor and a talk with Congresswoman Pramila Jayapal and economist Robert Reich. All Town Hall produced homecoming events are free for youth ages 22 and under and almost all Town Hall produced events are just $5 for everyone else.

For a full list of Homecoming events, visit townhallseattle.org.