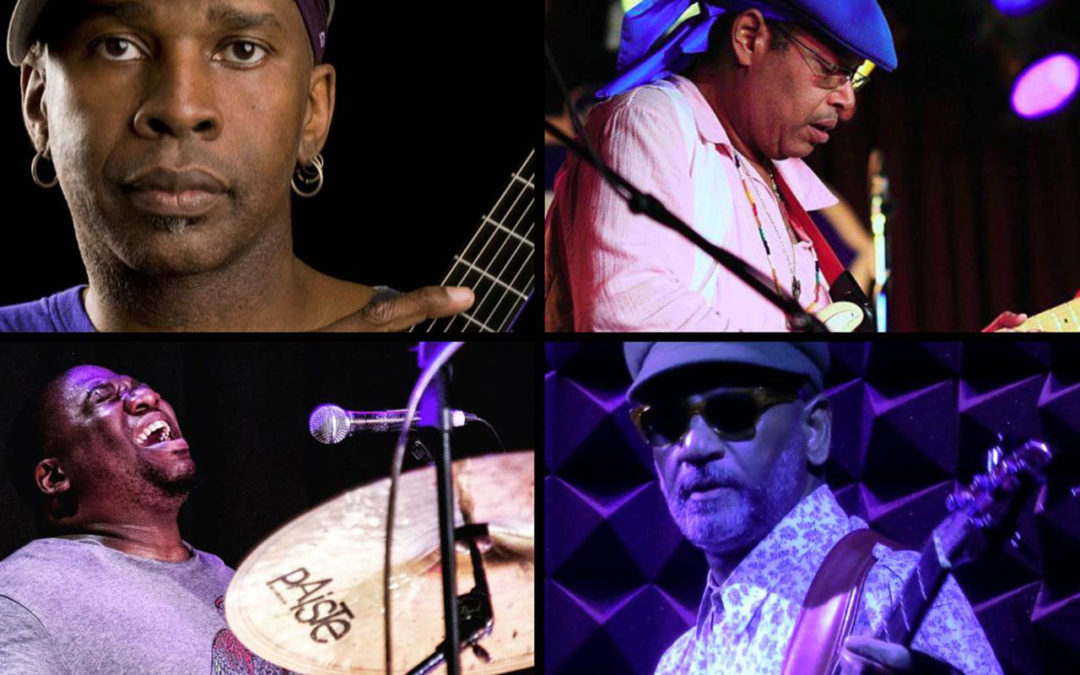 On the final day of the 1960s, Jimi Hendrix recorded one of the greatest live albums in the history of rock: Band of Gypsys. A trio comprised of Hendrix along with drummer Buddy Miles and bassist Noel Redding, Band of Gypsys outlined a template and set a standard for modern rock guitar, creating a musical shock wave that is still echoing to this day. As lasting and influential as much of Hendrix’s work was with his original band, The Jimi Hendrix Experience, the earthy, funky, and deep-grooving sound of the Band of Gypsys dug to a deeper level, p r o v i d i n g Hendrix with a thick bed of rhythmically flexible sound that pushed him to new heights of freedom and fiery creativity.

Nearly a half century later, iconic guitar master Vernon Reid lands in Hendrix’s hometown, riding the stillbreaking wave of inspiration from Band of Gypsys. Powering a blazing quartet of like-minded musicians, Reid’s updated project is not merely paying tribute to the original band but using it as a launching pad for this band’s own sonic interpretations and high-flying improvisations. Band of Gypsys Revisited is channeling something deep and resonant, tapping into the same mystically psychedelic well of transcendent rocking groove that powered the original Band of Gypsys. As Reid says: “We are not going to play a note-for-note recreation of the Band of Gypsys, but reinterpret it from an improvisational viewpoint.”

Vernon Reid occupies a revered spot in the pantheon of modern creative guitarists. To simply call him “eclectic” is to drastically underrepresent the staggering variety of music he has made, over a career spanning close to four decades. Best known as the founder of the multi-platinum rock band Living Colour, Reid’s de facto mission has seemingly been to defy the boundary expectations of what a black musician, a rock musician, a jazz musician, or an avant-garde musician is supposed to play.

Reid came to prominence in the early ’80s as a key member of iconoclastic and influential drummer Ronald Shannon Jackson’s Decoding Society. He made a duet album with Bill Frisell (Smash & Scatteration), worked with John Zorn and Public Enemy, and produced albums from avant-blues guitar maestro James “Blood” Ulmer. Reid also has an activist bent: In 1985, he co-founded (along with journalist Greg Tate) the vitally important (and active to this day) non-profit music advocacy organization the Black Rock Coalition, a collective formed to “maximize exposure and provide resources for Black artists who defy convention.”

Reid and the rest of the Band of Gypsys Revisited band share a lot of history and have played together in varying configurations since the mid-1980s. The quartet is all heavy hitters: André “Dré Glo” Lassalle (guitar) has performed with the Burnt Sugar Arkestra, Miles Davis, and John Scofield; James “Biscuit” Rouse (drums) served for five years as the musical director for Lauryn Hill, and has also worked with Nile Rogers, Stevie Wonder, and Chaka Khan; Jared Michael Nickerson (bass) came out of the legendary Dayton funk scene that spawned the Ohio Players and Slave, and has also worked with Charlie Musselwhite, The Roots, Bernie Worrell, Wadada Leo Smith, and many of Vernon Reid’s other projects, to name just a few.