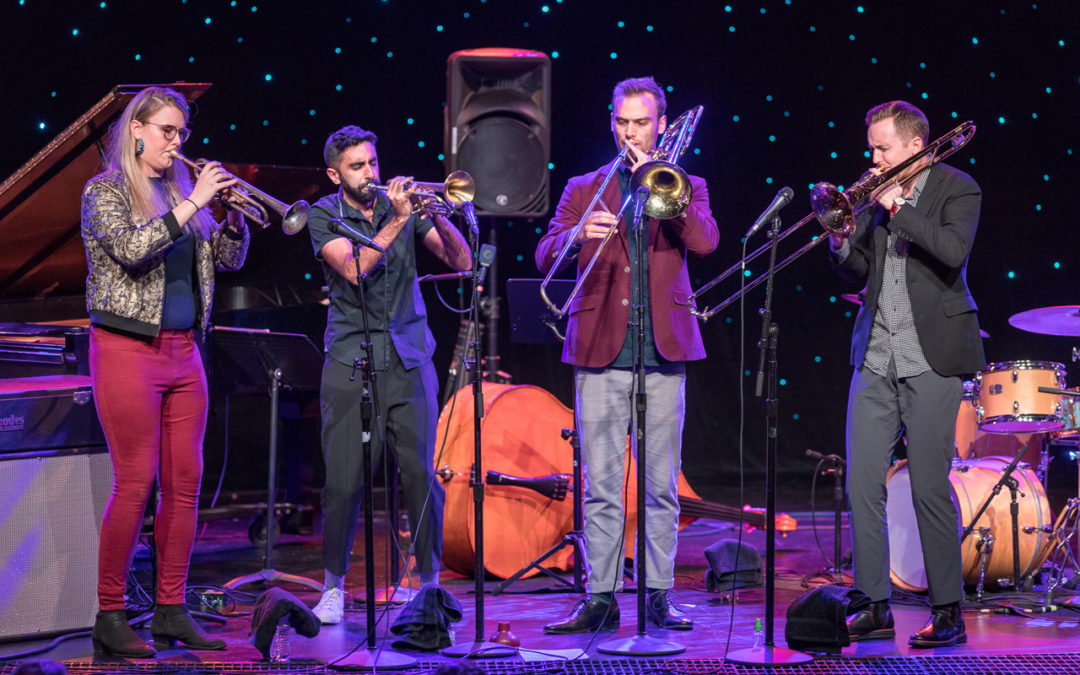 Shake off the winter blues, a wind is blowing in on brass. The Westerlies, a Seattle-grown, New York-based brass quartet are gearing up for their second annual Westerlies Fest in February, of­fering four days of music, poetry, and education.

Named for their eastward movement, The Westerlies craft a genre-shifting big band experience with Riley Mul­herkar and Chloe Rowlands on trum­pet and Andy Clausen and Willem de Koch on trombone.

“There’s something special in the way that Seattle as a city values mu­sic education,” de Koch said. Wanting to give back to the city that cultivated their musical talent and trajectory, The Westerlies have developed their own festival in Seattle, bringing together the musicians they work with from both coasts.

An important component to the fes­tival for the band is the public school workshops for the music departments. They reached more than 500 local stu­dents through eight in-school concerts at their inaugural festival.

De Koch expresses the impact visiting musicians had on him as a student and performer and how it helped shape his future. “It was important for us to see what it could be like to be a profession­al musician at an early age…I think it made that pathway seem much more attainable,” de Koch says. “So I think for us, we’re trying to do our part as best we can to nourish that music education and try to have some sort of rep­resentation for what these other students might want to do.”

While a small festival, the lineup is eclectic with performances by soul and blues singer/guitarist Celisse Hen­derson, singer-songwriter Robin Hol­comb, poet Troy Osaki, and spoken-word duo Sarah Kay and Phil Kaye. The Westerlies perform at each show, as well.

As de Koch explains, The Westerlies see this as an opportunity “to show­case friends of ours from New York who we think our Seattle audience might enjoy and take local Seattle art­ists that we believed in and give them a bigger platform in the city to present their music.”

Celisse performs at The Royal Room on Thursday, February 6; Holcomb at The Chapel Performance Space on Fri­day; and Kay and Kaye at Town Hall on Saturday. The Westerlies will close out the festival on Sunday, February 9.

The first Westerlies Fest took place in September of 2018, and the group has learned a bit since then. To avoid being stretched thin, they are holding their in-school workshops on separate days from the concerts. One major change, de Koch said, is making the Sunday pro­gramming free and open to all. Sunday, Febru­ary 9, will bring a community-focused work­shop and jam session with the band. The West­erlies will host a listening ses­sion with their favorite music and unpack it in conversation.

The festival is the biggest undertaking of the band’s charitable arm, de Koch says, but band members are involved in edu­cational projects throughout the year. The group gained nonprofit 501(c)(3) status in March 2017, giving them in­stitutional backing to broaden their impact.

A full pass to the four-day event is an affordable $50, while individual concerts are $25 a piece and $15 for students.–Whitney Bashaw

← Seattle Jazz and Culture Festival Part of a Larger Dialougue →