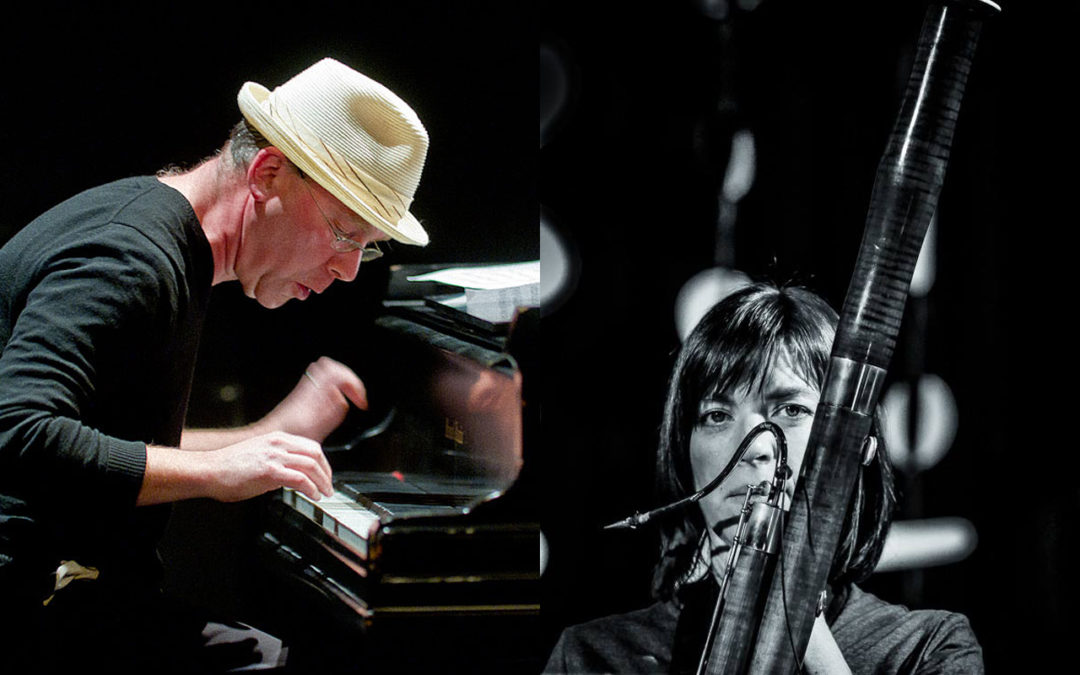 Bassoonist Sara Schoenbeck and keyboardist Wayne Horvitz call their duo collaboration “a study of the crossroads where texture and extended technique meet with and support the expression of melody and song.” Not literal, sung song, but music with the characteristics of song, explored through improvisation and improvisation-laden compositions.

They first met as performers at the Time Flies improvisation festival in Vancouver, B.C. in 2000, and have performed in several collaborations, since. Two have involved Horvitz’s chamber-oriented groups: his Gravitas Quartet for new-music, jazz, and improvised composition, and his Some Places Are Forever Afternoon, a septet that performed his suite based on poems of Richard Hugo. They have also often played together in improvising large and small groups.

In such settings, Horvitz’s writing has made great use of the sound of Schoenbeck’s instrument, which as a double-reed contraption few players have dared use in jazz settings. It’s notoriously difficult to master, in the first place, let alone import to jazz contexts. Saxophone great Illinois Jacquet has been among the few who have succeeded.

Horvitz’s writing for the groups Schoenbeck has graced has made great use of her sound, and that has enhanced their success. Conveying nuanced emotions, often blisteringly beautiful, even when mournful, his Way Out East for the Gravitas Quartet is a case in point.

Horvitz is, of course, renowned in Seattle and far beyond as a musician and composer who can do it all. Long resident here but a global musician, he has excelled in in genre-expanding jazz but also various related and not-sorelated fields. He performs on piano, keyboards, and electronics, andposes for his many ensembles as well as for dance, theater, and film. His list of collaborations, prominent with the likes of Bill Frisell, Butch Morris, John Zorn, and other boundary explorers, is miles long. As All About Jazz put it, “there’s nobody else out there I hear even attempting to cover some kind of similar range, and do it so convincingly.”

Horvitz has received many prominent grants for composition and performance, along with a host of commissions from the likes of the Seattle Symphony and the Kronos Quartet. His groups over the years have ranged from New York-based innovators The President to his seriously rocking Seattle quartet Pigpen to a series of quieter chamber groups, among them Sweeter Than The Day and the aforementioned ensembles with Schoenbeck.

In Seattle, he has nurtured a host of talented younger players, bringing many into the broad church of jazz from rock and grunge. His expansive ecumenism is reflected in his programming for the glorious Rainier Valley venue The Royal Room, which he co-founded in 2011.

Sara Schoenbeck  is tailor-made for collaboration with him. A classically trained Californian, her accomplishment on an instrument with relatively few great exponents has taken her to collaborations with a host of musicians and ensembles, in many and varied styles, as well as to teaching posts and master class appearances around the country, for both improvising bassoonists and classically trained musicians. She is currently on the faculty at Brooklyn Conservatory of Music and Packer Collegiate Institute.

The Wire magazine places her in the “tiny club of bassoon pioneers” at work in contemporary music today and the New York Times has called her performances “galvanizing” and “riveting, mixing textural experiments with a big, confident sound.” Following their duo performance, Horvitz and Schoenbeck invite their Seattle friends, Abbey Blackwell (bass) and Raymond Larsen (trumpet), to join them on stage for a second set.Tickets are $5–15 sliding scale at the door. More information available at waywardmusic.org –Peter Monaghan

← For the Record Pearl Django: Celebrating 25 Years of Hot Jazz →