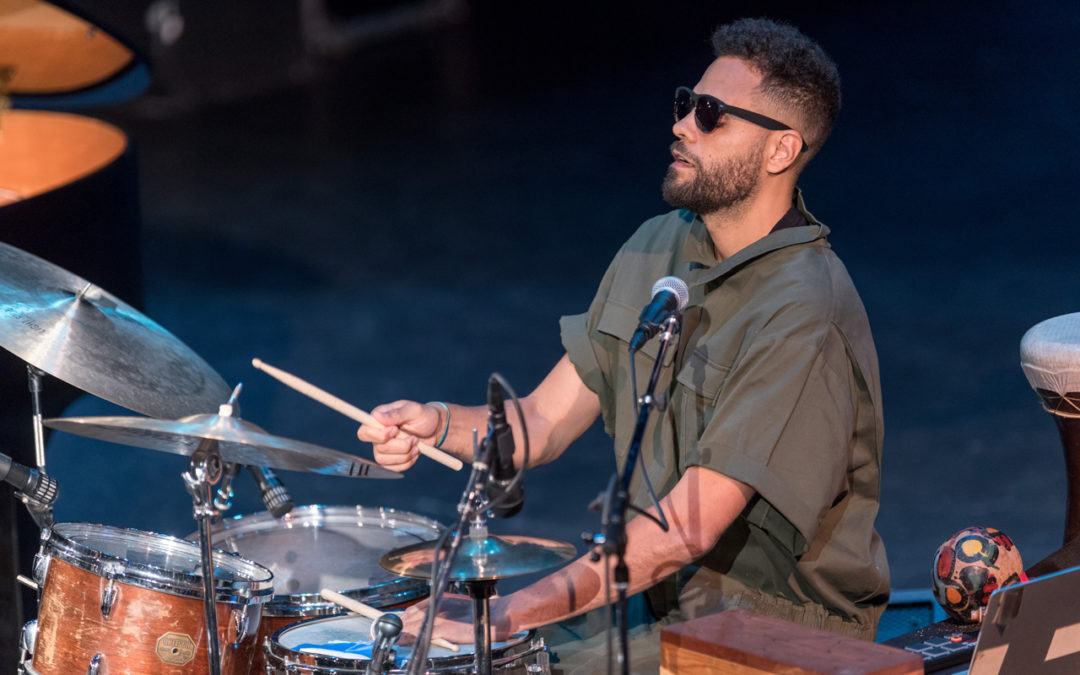 Presented by Jazz in the City

Clear your night for a performance you won’t want to miss. Brooklyn-based drummer, producer, rapper, and emcee Kassa Overall returns home to Seattle, appearing on the stage of the historic Triple Door in celebration of his second full-length album.

I THINK I’M GOOD—Overall’s debut with the London-based indie label Brownswood Recordings—wrestles with the political and the personal, including the targeting and incarceration of Black folks in the American prison system, mental illness, romantic relationships, and more. Creating a space to have an open conversation about these issues, Overall leans into the uncomfortable by simply calling it what it is. Yet, there remains an overarching gentleness to his music. Overall delivers hope and joy through his art, often keeping a light-hearted playful presence to it. He calls his process “backpack jazz,” a reference to his DIY mobile studio consisting of a laptop, a simple audio interface, and a microphone allowing him to record anywhere from hotel rooms to friends’ lounges to a bathroom, as humorously shown in the “I Know You See Me” single artwork.

After the success of his debut album, Go Get Ice Cream and Listen to Jazz, Overall rejects the contentment of keeping to one sound and continuously improvises and experiments with his craft. Balancing jazz and its younger siblings, rap and hip-hop, to deliver heavy topics, Overall engages with and challenges his audiences. He has demonstrated his talent opening for and performing or recording with artists including Das Racist, Arto Lind – say, Vijay Iyer, Yoko Ono, Terri Lyne Carrington,  Geri Allen,  Francis & the Lights, Ravi Coltrane,  and Gary Bartz.

In anticipation of I THINK I’M GOOD, Overall released three singles this last winter: “Please Don’t Kill Me” featuring vibraphonist Joel Ross and trumpeter, Theo Croker (whose album, Escape Velocity, Overall coproduced in 2016). “I Know You See Me” featuring jazz vocalists, Melanie Charles and J Hoard, and “Show Me a Prison” featuring J Hoard and a special outro of a voicemail from notorious activist and author Dr. Angela Da – vis, who calls to check in on Overall and encourages him to “stay strong, my brother.” The album cover pictures a young Kassa from his Washington Middle School days, a nod to the artist’s pride in his Seattle roots and to the historically Black neighborhood of the Central District where jazz continues to thrive off Jackson Street.

Overall’s show will be the grand finale to the inaugural Jazz in the City’s Seattle Jazz and Culture Festival, a festival dedicated to showcasing the diversity of Seattle’s arts and culture scene and the legacy of jazz and its influences. Overall will be joined on stage by Paul Wilson (synth/electron – ics), Julius Rodriguez (piano), and old – er brother, Carlos Overall (saxophone). It’s clear how deeply Overall values community—Seattle, it’s time to show out for this homecoming!

Tickets are $15 advance/$18 day of show for this all-ages event. Visit the tripledoor.net for more details.