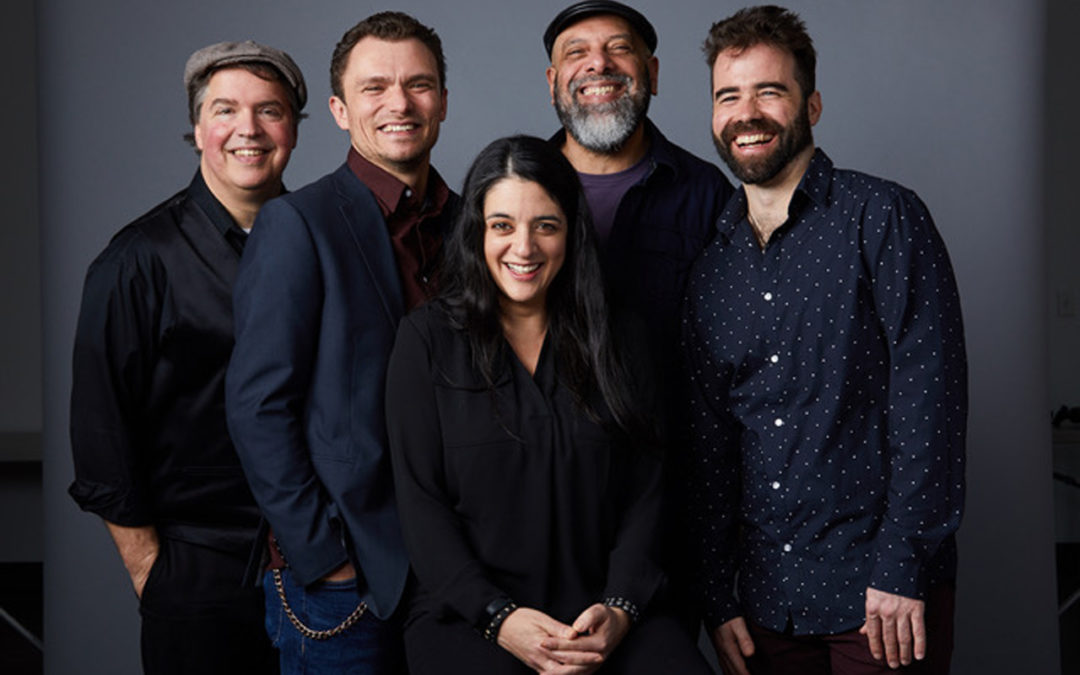 In the age of COVID-19 is it okay to say that an album is infectious? I hesitate, but then, Duende Libre’s lat­est IS infectious. It causes one’s toes to tap, one’s hands to clap, one’s head to bob around, one’s mouth to crack into a smile, despite itself. Fronted by key­boardist Alex Chadsey, Duende Libre (a trio including Farko Dosumov on electric bass, and Jeff “Bongo” Busch on drums and percussion), leans heav­ily, on their newest release, on the sounds and rhythms of West Africa. Their third album, The Dance She Spoke, is full of ebullience. “I hope this album brings joy to people,” Chadsey says, “and perhaps some hope and re­lief in this time of crisis. And I hope it inspires people to dance or, at least, give themselves permission to move!” A toe tap. A hand clap. A smile. Infec­tious.

Duende Libre translates roughly as “free spirit” and Chadsey has certainly felt it within the trio, putting out three albums in swift succession. Formed in 2016, they released their self-titled de­but album in 2017, an album rooted in American jazz painted warmly by thick brush strokes of Latin elements. Their second album, Drift, was released in the Spring of 2018. It increased their musical palette—touching on the folk traditions of Europe, Africa, and be­yond. Jazziz mentioned, “a strikingly authentic blend.”

The new album adds yet more color to the band’s work. It was largely in­spired by the addition of two musi­cians to the lineup—Frank Anderson (vocals and percussion) and Chava Mirel (vocals). Adding them added to the chemistry of the group as a whole. Anderson has been performing in and around Seattle since 1986 as a R&B singer, percussionist, and dancer. Chava Mirel is a singer, composer, and multi-instrumentalist and is a major voice in Seattle’s Jewish music com­munity. Chadsey says of Anderson in particular, “Frank taught us several amazing songs and rhythms he learned while studying music and dance in Mali and the Republic of Guinea.” Those traditional songs inspired much of the new album.

It’s not as though, it should be noted, that African music is ever far from Chadsey’s mind. “One of the early ex­periences in my life that made me want to be a musician was meeting Dumis­ani Maraire at the Northwest Folklife Festival in the 80s. His music blew me away and still does…It sparked in me a

desire to be part of a sound and experi­ence like that.”

That sound and experience comes to the fore with The Dance She Spoke. The tune “Fefo (Hamana)” is an intoxi­cating song, warm and breezy, kind and generous. “Echoes (Wassoulou)” starts off understated, melodious and blues tinged, before opening up into a much wider aural landscape where other melodic colors dance through rhythm. The time is punctuated by guest artist Thione Diop playing the tama (Senegalese talking drum). “Se­attle is blessed to have a master musi­cian like Thione in our community,” Chadsey enthuses. “Thione completely changed how I heard the music.” On a track like “Lafe (Hamana),” the joy the band wants to impart is imparted. Happy singers bounce the melody be­tween them, a peppy piano propels things, there are whistles, and vocal­izations, and African drums offering up bouncy exclamation points. It’s a pure celebration, much like the al­bum is as a whole, of collaboration and community.

“One of the beautiful things about music,” Chadsey says, “is the way in which it invites both musician and lis­tener into an intimate and powerful communion.” That communion can take place during a global pandemic when physical distancing is the norm. Though, perhaps, social distancing shouldn’t be. Music brings us closer together, or should. “Music is, and always will be, one of the most won­drous and sacred of life’s gifts,” Chad­sey says. With the new album, Duende Libre has given us a gift.

My hope is that the experience of liv­ing through this pandemic will clarify what’s really important for us as indi­viduals and for society as a whole. That includes treating each other, ourselves, and our planet with more respect, but it also includes embracing and honor­ing the many gifts we have inherited as human beings.