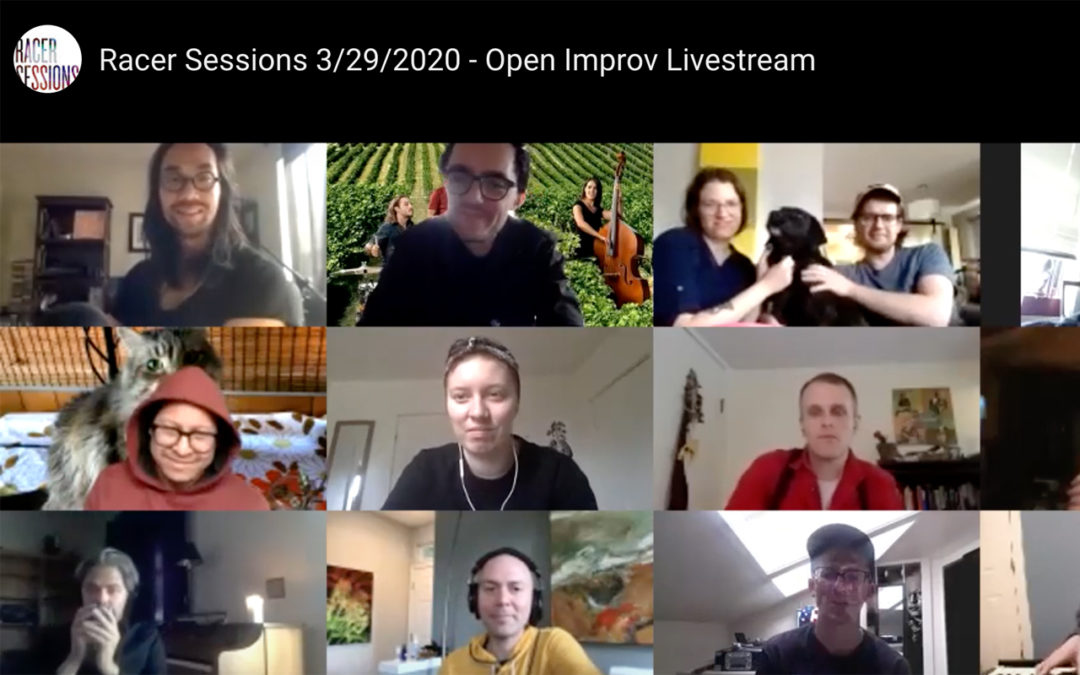 This January, the curated improv-jam Racer Sessions celebrated a decade of weekly meetings at Ravenna’s Café Racer with the Cry and Roar X festi­val. Having persevered through every­thing from a shooting that temporar­ily closed the venue in 2012 to another period of closure in 2017 due to finan­cial struggles, the Racer session com­munity continues to persevere together through the ongoing crisis created by the COVID-19 pandemic, reinventing themselves with weekly live-streamed concerts and jam sessions.

“Everybody brings their own thing to it, because it’s all about listening, adapting, respecting each other, [and] responding in appropriate ways,” co-founder of Table and Chairs and orga­nizer Evan Woodle said about the jam.

For the first few weeks after the stay home, stay healthy order, Woodle ad­mits he was “zapped” of creative en­ergy. Despite the COVID-19 clo­sure of Café Racer and venues across town, and strict social distancing or­ders in place, the community eventu­ally brainstormed creative solutions to overcome these obstacles. On March 29th, Woodle and the Racer team opened a livestream to players from across the country, playing from their homes. The reimagined program is titled Racer Sessions: The Zoom Ses­sions.

“I hadn’t attended the Sessions since I moved to Chicago in late 2018,” said pianist Andrew Olmstead, who played that first Sunday. “Attending them again has been wonderful and surreal… The happiness is also accom­panied by a modicum of melancholy, because it reminds me of when I could play music with someone and hug them afterwards.”

After spreading bookings between each team member for two weeks, Woodle and his fellow organizers came up with a new format to keep the session going online: in addition to an opening set, a set of curated perform­ers play shorter, 10-15 minute sets be­fore the free-improv jam. The time of the session has been moved up to 4pm PST, allowing those who have relocat­ed from Seattle, such as Olmstead, to reconnect.

“With technology—besides the secu­rity stuff—it’s almost impossible to get everybody on the same page as far as the video and audio quality,” Woodle says, noting that, though improvisa­tion thrives on barriers, current video-conference technology simply doesn’t allow large scale group playing.

In the week following, trombon­ist and composer Christian Pincock tested this idea, conducting his impro­vised orchestra scrambler over Zoom from his living room. “What we’re really talking about is relativity, Einstein,” Pincock says. “We have different local times, and it’s going to be different depending on where you are. What’s interesting is that the recording, the broadcast, has to take a perspective, it has to take a vantage point, because it’s mixing these different times in space and choosing which one’s going to be the master.”

With lockdown, Pincock took to work quickly. The problem of how to keep working artistically had become, he says, “a necessity.” That day, his performers’ sounds came back with a noticeable lag. But, as a conductor, he couldn’t wait.

“I can’t react to what I’m hearing, I have to anticipate it,” he explained. Not only that, but in the camera eye, his work as a conductor has taken a likeness to dancing; with a nod to the new visuals, Pincock has also taken to painting live during improvised sets.

Prompting his players with songs about change and an ancient Gregorian chant on mourning, Pincock drew out variations on the current time. For the following week, saxophonist and composer Bryan Lineberry took his sound into a new space, improvising around the five stages of grief (denial, anger, bargaining, depression, and acceptance) on top of his car in his apartment parking lot. That is, until bargaining, when a neighbor came and requested him to stop so he could resume watching television.

“Life is spilling from one container to another,” notes Pincock.

Lockdown has brought players separated in space back into conversation with one another. For May 3rd’s session, Racer’s live jam combined with the “FreeSessions” of the Missoula based Lakebottom Sound, a project helmed by Naomi Moon Siegel, a trombonist formerly based in Seattle, after an opening set with Sean Howard’s Ptesseract.

“[We’re] thinking about the people in the community, making sure everybody is healthy and able to stay together,” Woodle summarized, emphasizing the welcoming atmosphere of the sessions. His biggest hope is the survival of small businesses, like Café Racer, and he recommends that participants continue their financial support, since “if you were there, you’d buy a drink or two, maybe a little food.”

For those taking part, the combined experiment of community continues. For last week’s stream, percussionist Ruby Lucinda played an opening set on improvised drums to the fourth-wall breaking spoken word and dance of Allison Burke, ending their set with the digital-mike-drop of a cut signal. Spoken word artist Ian Murdoch gave a surrealist sermon to an improvised soundtrack, and organizer Casey Adams shared a Frank Zappa video on live chat after trombonist Haley Freedlund played a bicycle wheel she was repairing.

“It really feels like this community, we’re not going anywhere,” says Pincock. “We will adapt to anything that’s thrown our way”