Catching Up With Samantha Boshnack: Working Through Discomfort

Catching Up With, December 2020 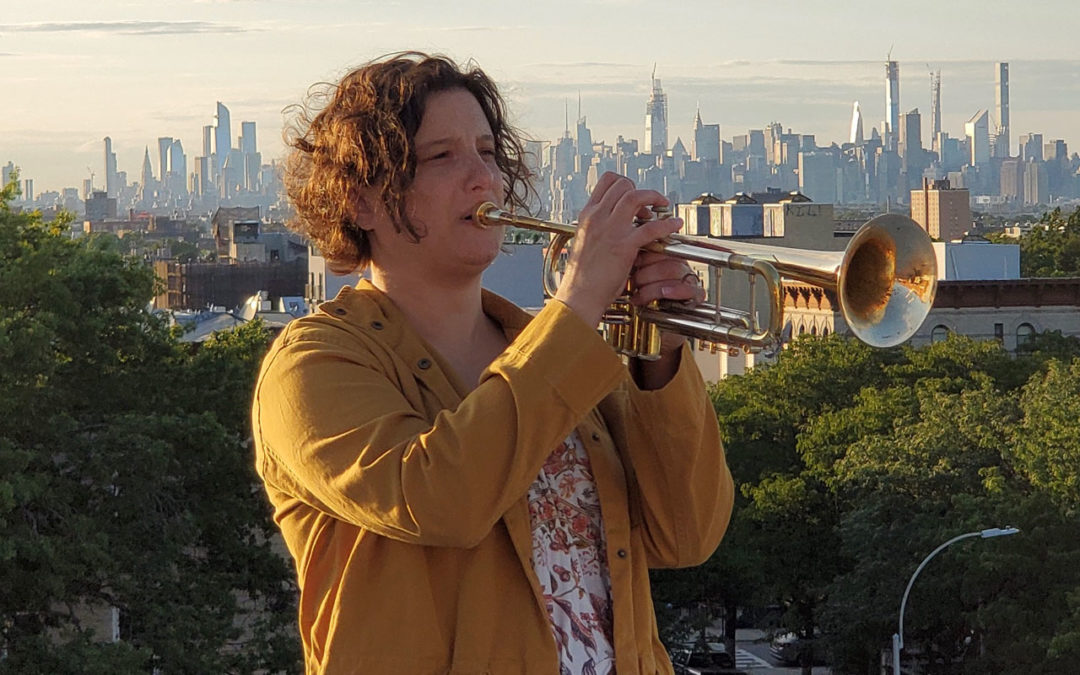 Trumpeter and composer Samantha Boshnack had just returned from playing the Winter Jazzfest in New York with her group Seismic Belt, covering the volcanic material from her 2019 release Live in Santa Monica. The pandemic was just beginning to close doors when she played the Royal Room with her quintet on March sixth, the venue’s penultimate live performance. By the 23rd, governor Jay Inslee had issued a two-week long stay at home order, and the state went on lockdown.

For her, as for many, the following months of isolation and unrest were difficult.

“It was really stressful,” she says over the phone, “I’m teaching on Zoom for six hours a day on trumpet, and I don’t know where to go.”

Splitting her time between composing and teaching for Seattle JazzEd and the Seattle Repertory Orchestra Scholars, Boshnack felt nervous meeting with musicians to play: as a horn player, she couldn’t wear a mask, and though she managed some collaborations, didn’t like livestreaming much either. In addition, noise from construction seeped into the Central District apartment— where she’d lived for nine years—as developers worked to squeeze another building into her parking lot.

“They paved my backyard with three days’ notice. I wasn’t happy,” she said. Looking around for other options, she found that rent had gone up all over the city; even subsidized housing exceeded her budget. Over the summer she knew “things were going downhill.” So, after 17 years in the city, she and her partner decided to move to a mother-in-law apartment in Federal Way, near Tacoma, in a suburb by the water.

“Even in Tacoma, people are getting pushed to Olympia. It’s this trickle-down effect that keeps happening,” she explains of her “surreal” move from the city, “I’m grateful to be even in the Northwest anymore.”

Despite these changes Boshnack continued her work in her new home. She completed a composition for the nonprofit Gabriela Lena Frank Academy, where she had studied with the founder/composer, and mastered her third record with another composer’s collective, Alchemy Sound Project. Brought together by the Jazz Composer’s Institute and kept going “against all odds,” the Sound Project will be releasing Afrika Love on the Artists Recording Collective (ARC) label, featuring work with Boshnack’s mentor, saxophonist and composer Erica Lindsay.

She’s also taken on two new projects, a duo for Wayward Music’s “Wayward in Limbo,” with her partner Chris Credit (featuring improvised and written material), and a project conceived “before everything got crazy,” called “Uncomfortable Subjects,” with poets Natasha Marin and Jane Wong. Funded by the Mayor’s Office and NonSequitur, “Subjects” has evolved from a desire to work with words to conversations about race, anxiety, and even discomfort itself.

“I didn’t realize how uncomfortable we’d all be while working on this, [as] we were all deprived of some of the comfort we used to have,” she says, noting also how the piece has brought new challenges in working with artists in different mediums.

The project, likely due in big-band form next June, keeps Boshnack busy, in addition to teaching, a constant practice which, though it pays the bills, she’s sure has helped some kids get through recent times. And though she appreciates that families still value music education and educators, she admits that teaching remains mainly a means to her, and not an end.

“A lot of the sustenance as a musician you’re fed by going to see shows, playing with your friends, all those things that you’re not doing [right now],” she says. As others can probably relate, she can’t help but feel like she’s going crazy from isolation.
“It’s hard to feel super inspired, you also feel like things feel so scary for the future.”

Reflecting nervously on an election that follows a year of uncertainty, Boshnack hopes that the public will appreciate the venues that have brought them music, and think on forms of funding that can keep live music living, as it’s the social aspect of music which people need most. Without it, she says, these days would be “seriously hell.” Now, thinking back on gigs she took in Seattle before the pandemic, she recalls the occasional wish to stay home and compose.

“Not that I took things for granted, but I’m so glad for every gig I took now, she says, laughing bittersweetly. “I hope that when we get out of this, there is more appreciation for the arts. Because it’s not like it was easy before this”–Ian Gwin

Do you have a story you want to share with the Earshot Jazz magazine readers? We encourage musicians, educators, or anyone who works behind the scenes in the jazz community to reach out to us with your ideas at editor@earshot.org