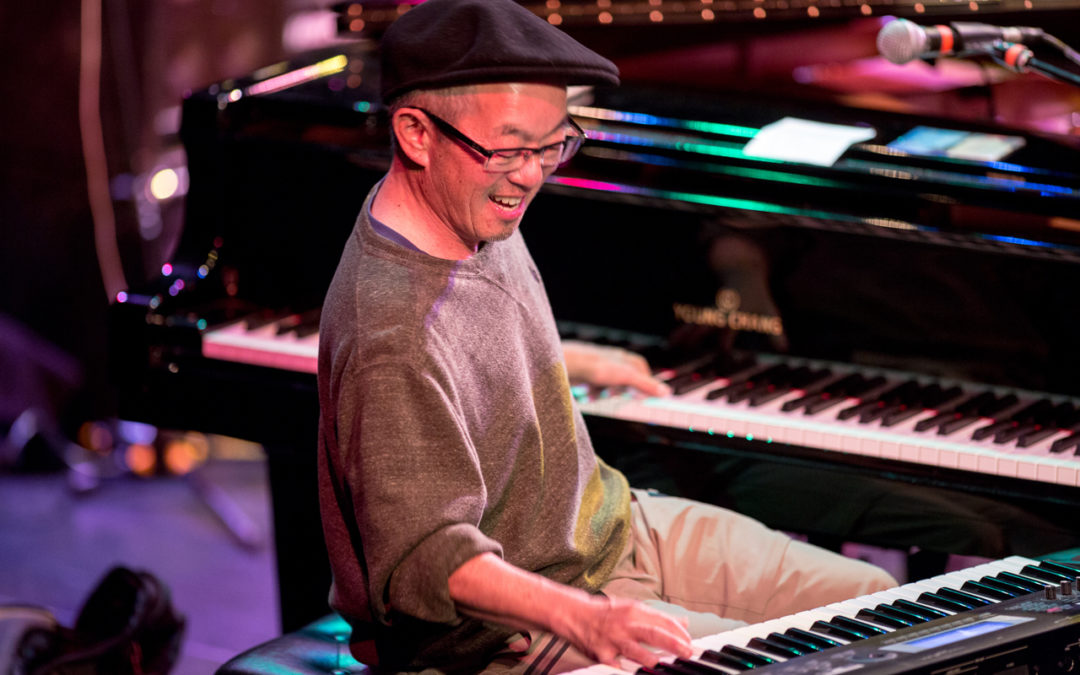 One of the brightest threads running through the Seattle music tapestry over the years has been funky R&B, whether you’re talking about Gene Argel and Dave Lewis in the ‘60s, Kenny G and Robert Damper in the ‘70s, Michael Powers in the ‘80s or today’s B3 organ phenom, Delvon Lamarr. Perhaps the most beloved of all our funk-jazz figures, however, was the groovy, good-natured keyboard man, Deems Tsutakawa, who left us prematurely this past February, dying of cancer at the age of 69.

Deems worked primarily on the local scene, though at one point he enjoyed heavy radio play in Minneapolis, where he also performed. Other tours included Hawaii, Florida, Alaska, California, Tokyo, and London. He was a hard-working, motivated player who almost always found work, whether at a humble Denny Regrade lounge like the Warwick or at the 2018 Earshot Jazz Festival. He did all his own bookings and produced his own albums—all 17 of them—on his own label, J-Town.

Born in 1952, Deems was one of four children of the world-famous sculptor George Tsutakawa. Attending Franklin High School in the ‘60s—a few years before the award-winning Franklin Jazz Lab band with Kenny G got started—Deems started on classical piano at age five but was soon pulled into the soulful eddies of Oscar Peterson, Wes Montgomery, Ramsey Lewis, and Cannonball Adderley.

From the start, Deems made no bones about his “smooth jazz” outlook.

“My father’s more of a pure artist,” he told Patrick MacDonald of The Seattle Times, in 1983. “I’m a pop artist, a commercial artist.”

As early as 1970, Deems was playing a steady gig at the Mikado restaurant with his brother, Marcus (who would go on to a stellar career directing the Garfield High School orchestra). In the ‘70s, Deems could be found at other International District venues such as the Silver Dragon and China Gate; Central District clubs like Latiff’s, Thompson’s Point of View, and Heritage House; downtown, at Benihana of Tokyo and Asuka; and in Pioneer Square, at the New Gallery Garden, Ernestine’s, and Merchants Café. He also played at the old Opera House for the 1983 Bumbershoot festival and was one of the few Seattle musicians to headline at Jazz Alley, in 1993.

The intrepid pianist kicked off his record label with a 1977 single, “Okashi Na,” and released his first eponymous album in 1982, selected by Jazz Educators Journal as one of the top 20 albums of the year. His second effort, Living Deems (1986), featured the catchy, riff-based tune, “Tough Tofu,” which became a signature. Playing sleek guitar lines on that album and many subsequent projects was Franklin Jazz Lab alum David Yamasaki, who would go on to play with Pete Escovedo and Tito Puente and become a regular instructor at the Stanford Jazz Workshop.

“I met Deems through Marcus, who was the bass player in jazz band,” recalled Yamasaki from Honolulu, where he has lived since 2002. “Deems invited me to jam in the basement of his house in Seward Park. Some of the best musicians in Seattle hung out at Deems’ sessions—Steve Banks, Wayne Rabb, Steve Kim—but he was like a teacher, teaching us about the Seattle sound, that kind of mixture of jazz and soul music that kind of permeated the Central District at the time.

“He was a great mentor. The main thing I learned from him was that you just have to completely try to be yourself. And the main thing he loved was staying in the groove, in the pocket. That’s a lesson we both got from [fabled Seattle teacher] Jerome Gray. And if someone in the band wanted to play a lot of technical notes or a lot of harmonic expansions, he was fine with it.”

Deems Tsutakawa had other career highlights, including an award for jazz album of the year in 2018 by the Hawaii Academy of Recording Arts for his album Deems & Friends Live in Hawaii.

A memorial is in the works but at this writing details have not been announced. –Paul de Barros

← In Memoriam:Paul Taub, Flutist and Champion of Contemporary Music