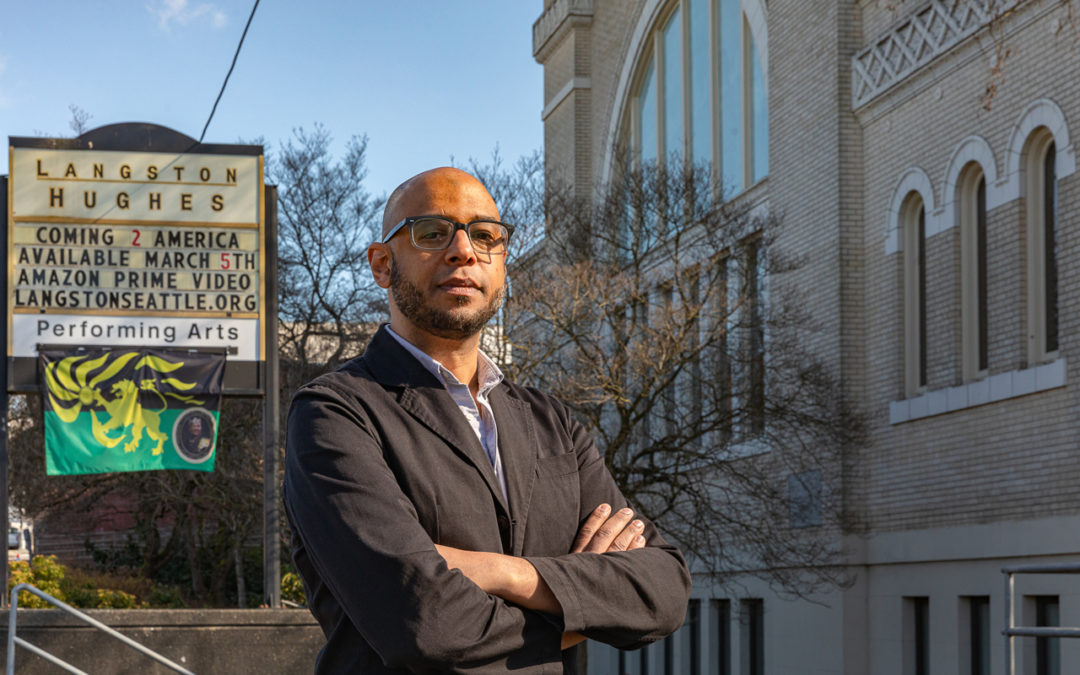 PAUL RAUCH
The professional résumé of Langston Director, Tim Lennon, reads like an honor roll of groundbreaking, difference-making cultural organizations in Seattle: The Vera Project, One Reel, Seattle Center Foundation, and the Office of Arts & Culture are among the nonprofit and public sector organizations that have benefited from his caring expertise and dedication to task.
The task he faces as Director of Langston is to cultivate Black brilliance by sharing Black culture, promoting artistic expression and excellence, facilitating cultural education, and inspiring leadership in a thriving self-determined community. Housed in the Langston Hughes Performing Arts Institute in Seattle’s historically Black Central District, jazz has played an integral part in exemplifying the values Lennon, Program Manager Jazmyn Scott, and the Langston organization as a whole have strived to portray.

The challenges faced while traversing life during what feels like a 100-year pandemic falls especially hard on organizations like Langston, whose service to the community is so largely based on in-house creative participation. Lennon and the Langston staff wrestled with how to present programs outside of the physical space and how to begin to transition to an online identity.

The organization notably postponed the 2020 Seattle Black Film Festival from its traditional April dates to July in order to gather the necessary tools and expertise to pull off a virtual transition. Unsurprisingly, the event was a huge success thanks to the patience and dedication of the Langston staff. It enabled them to present the festival virtually with a degree of expertise that only experience can lend. “It turned out to be a huge success. What we found out through going online was that not only were we able to connect with our regular audiences, but we actually expanded our audiences in quite a few interesting ways,” recalls Lennon.

The benefits of the virtual presentation became immediately apparent. Gone were travel and lodging expenses for performers. Artists from all over the world became more accessible. Most importantly, it enabled Langston to reach a wider audience than a live performance would have allowed. Patrons with accessibility issues could receive the programming at home, relieving them of the difficulty of accessing the multi-tiered Langston building. Those who found it difficult to make it into town from outlying areas could now join as well. “We invested a lot in internet infrastructure, and worked out some of the kinks of live streaming programming,” says Lennon.

The resulting success created a means to provide hybrid programming going forward. They gained the ability to plan a live event, and switch at the drop of a hat to virtual if the need were to arise again, a skill set that plays large in the uncertainty of the months ahead in 2021. The 2021 Seattle Black Film Festival was also a streaming event. The 18th edition of the festival ran April 16–26.

Over the course of 2020, Langston partnered with renowned author, Ijeoma Oluo, to form the Seattle Artist Relief Fund with the aim of mobilizing community support for local artists in light of the pandemic and venue shutdowns. The fund has been able to provide emergency cash assistance to artists unable to perform on area stages. “In the past twelve months, we have been able to raise and distribute over 1.1 million dollars to individual artists in Washington state,” says Lennon happily.
Langston has celebrated Seattle’s rich jazz history in the Central District by presenting a number of performances annually during the Earshot Jazz Festival. Jazz presented in the magnificence of Langston’s unique sanctuary of sound is emblematic of the rich history of the genre in Seattle dating back to the nation’s earliest fully integrated jazz scene on Jackson Street in the 1920s. Modern jazz masters from Seattle and around the globe have graced the institute’s stage. The past two years alone have seen international stars such as Jazzmeia Horn, Gary Bartz, Eric Revis, Nasheet Waits, Bernie Maupin, Brandee Younger, and Sullivan Fortner appear on the Langston stage. Local stalwarts Kassa Overall, D’Vonne Lewis, Deems Tsutakawa, Gary Hammon, and Alex Dugdale are among Seattle’s jazz masters who have also dazzled on this stage.

In addition to the Earshot Jazz Festival, Langston lends support to the annual Jackson Street Jazz Walk, featuring an all-Seattle cast. The programming supported at these two events clearly underscores the Black roots and, in turn, the Black future of jazz music. It reminds us that jazz is social music, nurtured by fellowship and community. This very sophisticated and expressive art form has been sustained by the oral tradition in Black communities across America for the better part of a century. The very essence of Langston’s jazz programming is the simple fact that jazz is Black music, a cultural truth not always represented on area stages and in the local award-winning high school programs that feature mostly white musicians. Exposing young Black artists to the likes of Bartz, Maupin, and Horn is a huge step in bringing jazz music back to young Black audiences.

Langston’s Program Manager, Jazmyn Scott, serves as the perfect counterpoint to Lennon’s directorship. She has deep roots in the Central District and Seattle’s hip-hop scene, both in modern and historical terms. Her energy and diverse skill set is an elemental force in Langston’s impact in the community. “She basically grew up in this building. She’s really the heart and soul of everything we do here. She’s the next generation of arts leaders in this community. It’s a privilege to work with her on a daily basis,” remarks Lennon. “The two of us are the Bert and Ernie of this organization, and I’m definitely the Bert!”
While the arts world—Langston included—was focused on innovation to survive the impact of the pandemic, the death of George Floyd and the resulting fight for justice per the Black Lives Matter movement emerged. The nationwide movement took center stage, prompting statements from arts and culture organizations from coast to coast. During the months of May and June, at a time when Seattleites had taken to the streets by the thousands on a daily basis, Langston struggled whether to put out anything at all in terms of a statement. “We didn’t need to say Black Lives Matter, because our whole M.O. has been to cultivate black brilliance and to focus on Black arts, Black artists, and Black audiences. We didn’t feel any need to preach to the choir, because we were the choir. We’re going to keep doing what we do, which is making and holding space for Black art and Black artists,” states Lennon.

By gathering together the remarkable diversity of ideas that define Langston’s strong and positive presence in the Seattle arts community, its stated aims can really be stripped down to one essential characterization: to provide a home for the entire Black diaspora. At a time when there is a wealth of Black artistry in the city, they provide not only space and opportunity, but the focus of community elders to provide guidance and inspiration for Black culture to thrive generationally. It does so with an open armed and welcoming approach that invites participation and innovation. Lennon is the perfect guiding and facilitating force due to his personal awareness of, and commitment to, the enduring cultural legacy of the historically Black Central District community and beyond. Lennon believes the very first step is to create a welcoming vibe to all that enter the building or access programming online. “Whether you are in the LGBTQ community, a refugee, a recent arrival from Africa or from Oakland—we want you to feel as at home here as much as somebody whose family was in the CD fifty years ago,” he says. “Black culture is Black survival. Whether we’re talking jazz, any of the performing arts, visual arts, church, or a cookout. It’s all how we’ve survived this country this long. Keeping space open for Black art, a room available for a community to gather in celebration and mourning, in mind-blowing new experimental art, or just to see an old movie together—that’s a revolutionary act.”