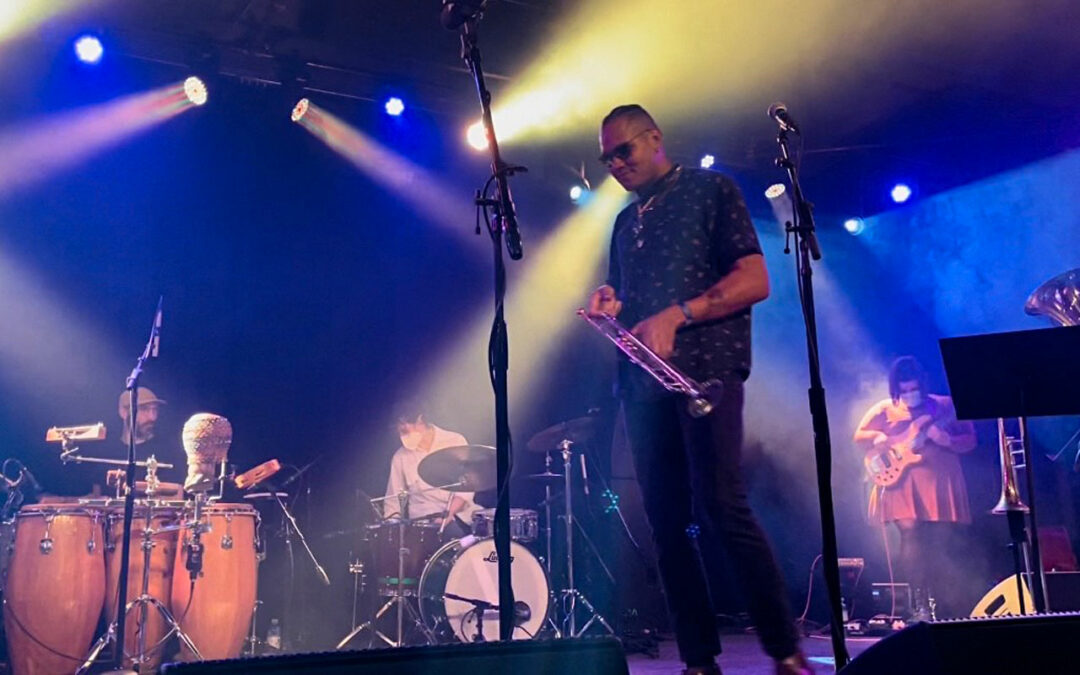 To be able to convene is a sacred thing. We know that now. Chief Ahamefule J. Oluo and his ensemble, The Shrine All-Star Band, offer that transcendent experience to Seattle every fourth Friday of the month for free at The Crocodile’s newest main stage at 2505 1st Ave, just a few blocks away from the original location.

In the spirit of the all-night go-go clubs of D.C., doors for this late-night, 21+ hang don’t open until 10 o’clock, with music following an hour later. Such a late event is unusual for Seattle audiences, but it’s guaranteed to be worth every moment. The music mixes multiple styles, sounds, and cultures from the Seattle-based trumpeter’s American and Nigerian experiences.

In February 2020, Oluo and his band visited Washington, D.C., to play at the University of Maryland. After their gig, they went out to a go-go show. Go-go music, originating in D.C. in the 70s by African-American musicians, was formulated by large band sections filled with horns and percussion so both the music and dancing would not stop.

The show went until four in the morning, with people selling delicious food out of the trunks of their cars. It was a beautiful sight to behold, to see a community gather like this. Seeing people having the time of their life—connecting through music—had sparked something inside of Oluo to think, “Aha! This is how it should be.”

By the time they had returned to Seattle, nightlife was all but shut down in the Emerald City due to COVID, and what inspired momentum was there had to be placed on the back burner. But deeply inspired by their visit, Oluo held onto the dream of bringing that same energy to Seattle one day.

Almost a full year later, Oluo was approached by The Crocodile, inquiring if he’d want to put together a monthly show at the new venue and, if so, what might it look like? Having had this vision marinating inside for some time, Oluo said, “It felt meant to be.”

The first Shrine was held at LoFi in October 2021, which Oluo recalls as one of the best shows of his life. It is also no coincidence who Oluo chooses to share the stage with. He states one of his most cherished gifts is the ability to see the beauty and humanity in people and how all of these personalities can interact with others both on and offstage. Now, he has the opportunity to curate an event to bring in fellow musicians and an attentive crowd for a night of cultivated joy.

At the April show, Oluo’s brother, Eze-Basil Chinwendu Oluo D’Oracle, welcomed the crowd and invited each of us to let go of any insecurities we may have had and join him in the healing movement of dance. Eze grew up in Nigeria and had played an important role in connecting Oluo with his roots, culture, and family in Africa. Seattle-based multi-genre drummer, Sheridan Riley, and conguero, Teo Elisio Shantz, are a force together. Shantz’s conga set is equipped with a shekere on a high-hat stand, and alongside Riley, their spot-on interplay provides a wide range of non-stop rhythm that makes it almost impossible not to dance. Giving the room a heartbeat you can feel on the floor is bassist, vocalist, and 2017 Earshot Jazz Emerging Artist, Marina Christopher, who lays down the foundation on both upright and electric. Josh Rawlings, a longtime collaborator of Oluo’s, lays poetically into the keys, adding a funky, soulful, rather intergalactic element to the mix. Jerome Smith plays both the tuba and trombone and mesmerizes with outstanding interchange between each instrument.

I really want to create music no matter how advanced or primitive it is, to speak to the listener, whether it is inside or outside of what they already know. As a comedian, the first job we have is to make people laugh, and in music, there is almost an equivalent to that laughter you can feel inside. It is a change in the listener when they feel something they didn’t feel before. This is my guide and the light post that I follow.

Regarding the future of The Shrine, Oluo says: “I am hoping this will lead to an institution. What that means to me is that this becomes beyond me and belongs to the people, built by the people. Right now, it’s awesome that my name is on it, and I want to put whatever I can behind the show and be of service. But, hopefully, one day, I can listen.”