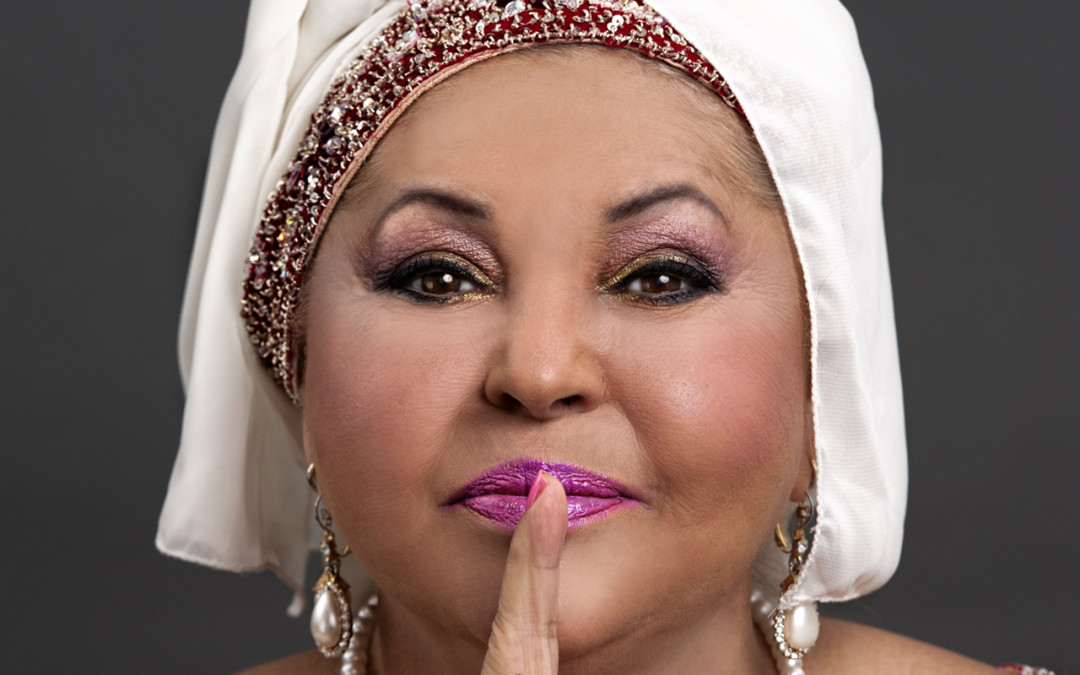 Esma Redžepova has paved a Romani road from Skopje, her birthplace of 72 years ago, to all corners of the world. The prodigious vocalist has earned such titles as “Queen of Romani Songs” and, from NPR, inclusion on its list of the “50 Greatest Voices” of world song.
It’s easy to hear why, in performances that feature both her prodigious, soaring vocal talent and her expansive spirit, both refined during over 60 years as a professional musician.

Redžepova was born the second of six children of a Muslim Roma mother from a village close to Skopje. Her parents had, in their parentage, a Catholic Roma and an Iraqi Jew. Her family included Muslims, Christians, Jews, and others, so that hers was a rich musical inheritance.

She grew up in a time of widespread injustices against the Roma people. When she began her career, in her early teens, the Romani songs she performed were disparaged in the Balkan states. But she persisted, in collaboration with her eventual husband, Stevo Teodosievski, an ethnic Macedonian leader of a large folk ensemble.

As they battled for acceptance of their musical choices, Redžepova and Teodoievski met hostility from Roma and non-Roma bigots alike. The objections were in part to their ethnically mixed marriage, which was formalized when she was in her mid-20s. By then they had moved to Belgrade, the capital of what was then Yugoslavia, in search of greater acceptance.

Teodosievski was an advocate for Romani culture, but supported Redžepova’s desire to sing both Romani and non-Romani songs. When she joined his Ansambl Teodosievski, he also urged her to undergo formal vocal training, which she did, at the Belgrade Academy of Music. She then began singing with Teodosievski’s troupe, and throughout the 1960s and 1970s they took their repertoire to international audiences. Redžepova sang in many languages, and injected into her performances and recordings elements from many musical styles, both folk and pop, and with instrumentation ranging from the traditional to the electronic and synthesized.

She earned the title of Queen of Romani Songs in 1976 at the World Festival of Romani Music in India. She said the title “stands for loyalty to the Roma people whom I have represented with dignity throughout the world.” Indeed she has, and in 2000, at the Festival of Roma Experiences in Moscow, she was honored as Laureate and Roma Singer of the Century.

A mark of her broad popular appeal is that in 2013 she, together with Vlatko Lozanoski, represented Macedonia at the pan-European Eurovision Song Contest. She has toured for more than four decades, giving more than 8,000 concerts in over 30 countries, and made dozens of acclaimed recordings.

During the 1980s and 1990s, when Redžepova and Stevo Teodosievski moved back to Skopje (he died in 1997) and began raising an unusual family that now has included about 50 Roma foster children whom Redžepova has trained in music and the music business. She also is renowned for her community and charity work. She has built a “Home of Humanity and Museum of Romani Music” combining archive, theater, and recording studio with an outpatient clinic for underserved populations.

Many of her children have accompanied her on her tours, including master accordionist and ensemble arranger Simeon Atanasov, a member of her current Folk Masters band, which also includes Filip Nunevski (trumpet), Aleksandar Stamenkovski (guitar), Nikola Mitrovikj (bass), and Safet Demirov (drums).

Redžepova’s ability to draw audiences into her performances is legendary; it stems from a radiant generosity on the stage, and a full engagement with song. In an interview in 2010, she said that when she sings, whether about suffering or joy, “I live what I am singing.”

← Shuga Jazz Bistro: A Spread of Music Dished Out With A Southern Welcome North Bend Jazz Walk Returns For Its Fifth Year →