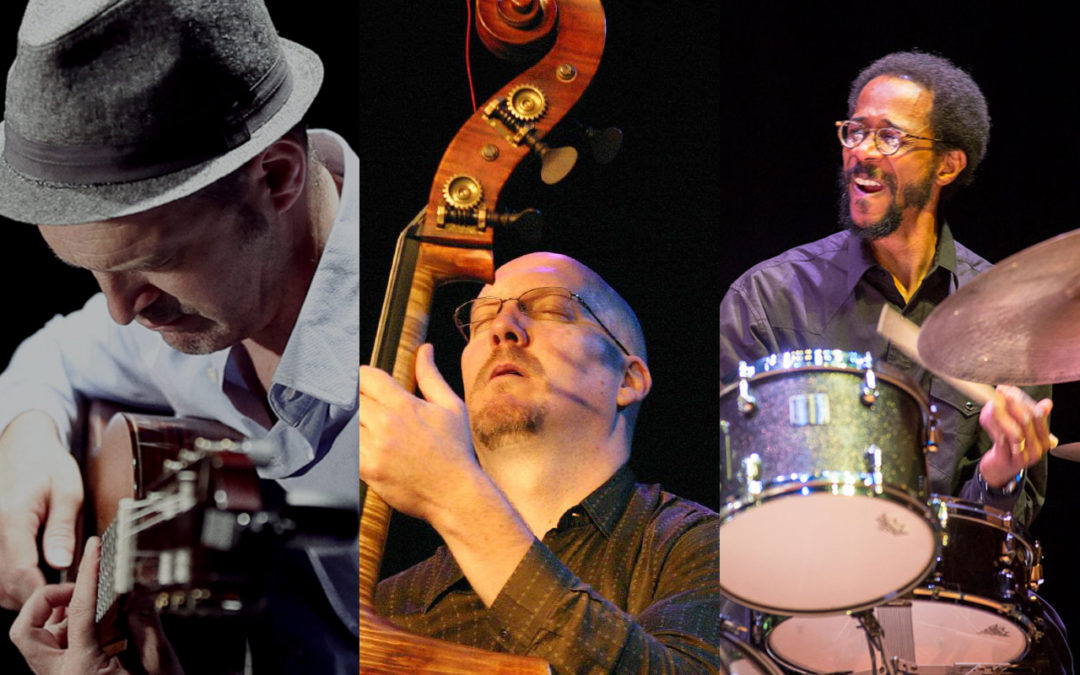 Austrian guitarist Wolfgang Muthspiel has always endeavored to experience the thrill of the edge, while at the same time honing his craft within the defined space created by his jazz and classical forebears. His trio explorations have included musicians with similar ideology, whether in a standard format with bass and drums, or his all guitar trio with Ralph Towner and Slava Grigoryan. For his February 2 date in the Forum at Town Hall Seattle, Muthspiel will perform with a remarkable configuration featuring drummer Brian Blade and bassist Scott Colley.

Muthspiel’s work has been well documented on over twenty albums as a leader, in recent times on the ECM label. Whether playing electric or acoustic, he brings out the sonic qualities of the guitar. In the trio format, the music takes on the qualities one might expect from a piano trio, with all members operating on equal terms, resulting in rich, harmonic density, and polyphony. The guitarist creates space for the trio’s eclectic musings, with bass and drums responding to his musical statements with assertions of their own that travel equally in space. Very often, Muthspiel starts the proceedings with a single guitar line that evolves into a full ensemble masterpiece.

Bassist Scott Colley is widely regarded as one of the leading bassists of the post-bop era. Colley’s intuitive, almost empathic musical sense is a neat fit within the context of the trio. While a leader of note, and a skilled composer, Colley’s work with the likes of John Scofield, Herbie Hancock, Chris Potter and many others is what has brought him the respect and recognition he has earned. He, as well, played on Joshua Redman’s Still Dreaming record with Blades and Ron Miles.

Drummer Brian Blade’s legend continues to grow both as a leader and sideman. His intuitive skill set gained from his long run in the Wayne Shorter Quartet speaks to his inclusion in Muthspiel’s spacious musical settings. The Shreveport, Louisiana native established himself as a versatile, highly skilled drummer early in his career, performing and recording with the likes of Joshua Redman, Kenny Garrett, and Bob Dylan. He has led a variety of projects as a leader, most notably his now two-decade long tenure with Brian Blade & the Fellowship Band.

To see a trio of this pedigree in the intimate confines of the Forum is a rare opportunity. Muthspiel’s work on both electric and acoustic draws the listener into a very intimate place in itself. Blade is a once in a generation talent, as integrated in the melodic aspects of the music, as he is rhythmically. Colley is beyond foundational on bass, adding depth harmonically to a trio that leans towards the atmospheric side. It would appear to be the perfect vehicle to approach the wide canvas with which the bandleader works, all with the contrapuntal possibilities of the piano trio. Tickets at earshot.org.

← Celebration of Jim Knapp New Faces for a New Year →