IF YOU BUILD IT, THEY WILL DRUM: Steve Smith and the Seattle Drum School of Music 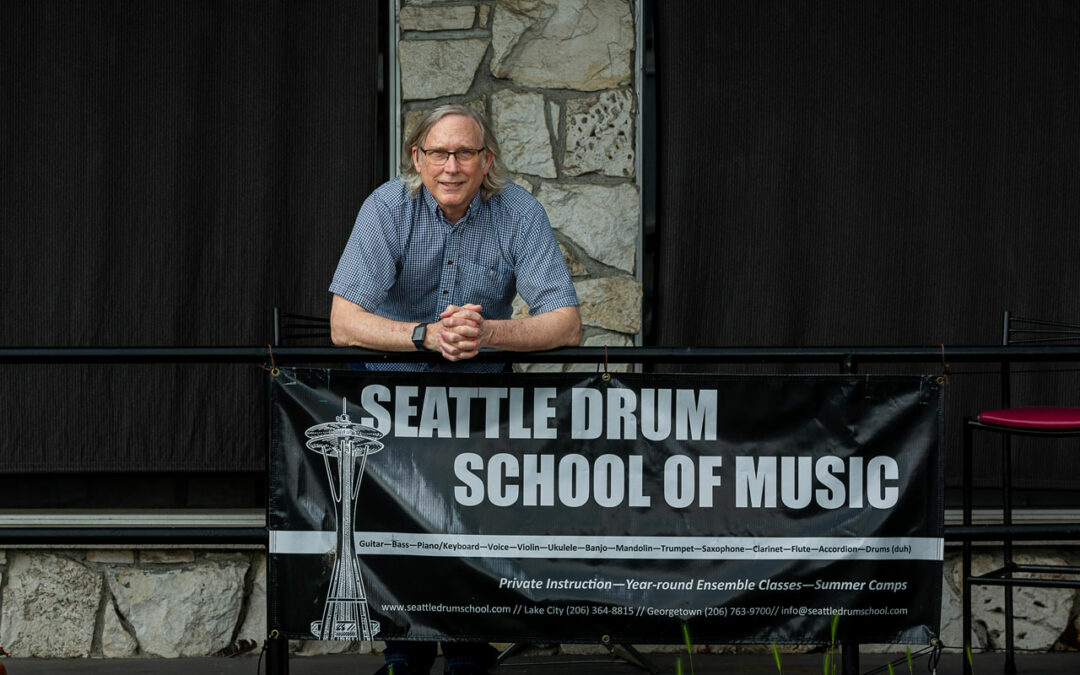 Leonard Bernstein’s “Young People’s Concerts” was playing on the TV, and Steve Smith was watching it with his family in the living room of their Richland, Washington home. This was about 60 years ago. Smith was no older than the fingers you can count on one hand. His parents would watch their son swing his arms around, conducting to the music like the famous maestro on the TV was doing. He’d do that and then start tip-tapping his hands on his legs. “My grandma,” Smith says, “would see me doing that and ask what I was doing? And I would say, ‘I’m just a-drummin’ and a-drummin’!’”

Steve Smith is now 65. He has been doing much more than just a-drummin’ since patting his thighs with his little hands to Leonard Bernstein television programs. Smith owns and teaches, with his wife, Kristy, at the Seattle Drum School of Music, with locations in Lake City and Georgetown. Yes, he plays drums and, yes, he teaches drums and, yes, he listens to drummers and, yes, he learns from drummers, too, but Seattle Drum School of Music (SDSM) is more than just drums. Seattle Drum School also teaches guitar, bass, voice, piano, horns, and more. This is to say, SDSM teaches music. This is to say, he finds inspiration in all of it and hopes to impart that onto students. This is to say, something Smith firmly believes: by learning an instrument, you learn much more than the instrument; you learn something about yourself. “There’s nothing more fulfilling than watching a young student walk in the door feeling shy or reserved, and maybe a little nervous, and seeing them relax and become comfortable with who they are,” he continues, “and confident that they are going to be celebrated for being themselves regardless.”

What started in the mid-1980s in an abandoned parking lot attendant’s office next to a Seattle music store has grown and continues to grow. With two locations, Seattle Drum School now has over 40 instructors teaching approximately 550 students. All told, Smith estimates that over 16,000 students have come through their doors. “I like teaching,” he says, “because I enjoy helping people have a blast; learning to do something that expresses who they are.”

To know Smith better, he admits that one would need to see him play drums. “There are aspects of who I am that are best expressed through my playing.” He tried his hand at guitar as a kid, but his hands were too small for the instrument.  He got a Lyle hollow body guitar and did his best to play the music of the bands he liked: The Monkees, the Rolling Stones, the Beatles, etc. He wasn’t that good. He says, “My parents were very tolerant and forgiving.”

Then he sat behind his brother’s drum kit. It was a 1939 Gretsch drum kit, complete with calf skin heads with alcohol stains and cigarette burns. He was 11 years old, taking to the instrument immediately. The local baton twirling group, the Atomic Twirlers, wanted drummers to accompany them on parades. Smith and his brother got hired. “The pay wasn’t great, but it involved hanging out with some girls, which I was just starting to take note of.”

And the teen took note of the drums to the point of obsession. Smith joined the band in high school and later studied music at Central Washington University. He soon was touring North America as the drum section leader of The Columbians, a drum and bugle corps based in Pasco. He joined rock bands. He also began cultivating an understanding and appreciation of jazz. Yes, Smith liked the big and famous rock stars: John Bonham, Keith Moon, Ringo Starr, and Chicago’s Danny Seraphine but jazz started to expand him. Max Roach blew his mind. Art Blakey, he marveled over. Tony Williams, Elvin Jones, and Ron Haines he counts as favorites. Gary Hobbs, a fellow Central Washington University alumnus, was another. “I listened to him on the Kenton ‘76 record a hundred times,” Smith says.

Mitch Mitchell to Brian Blade, from Peter Erskine to Roy McCurdy, who played for Cannonball Adderley, Smith explored all the ways one could express themselves through drums. This passion ignited in him a desire to share this enthusiasm for the instrument with others. At the age of 14, he began teaching the drums. His first student was a four-year-old neighbor kid down the street. He taught drums to many others through high school and into college. After moving to Seattle in 1983, Fendel began giving lessons. Then an opportunity came with the parking lot attendant’s office. “There was no insulation, no heat, no running water. It was just big enough for a couple drum sets and my vibraphone,” Smith says. “So, I started building a student base in Seattle.” Seattle Drum School came to be.

If you build it, they will drum. He says, “What started with one 144-square foot office grew over the next 20 years to encompass 14,000 square feet of space including two locations, two venues, and three recording studios.”

Drum, they will. Many who were students at SDSM have gone on to play in venues and concert halls the world over. The stories of the good work being done inside SDSM are endless. “Every time I see the joy and illumination on a person’s face when they walk out of the lesson becomes a favorite memory,” Smith says, “It’s all magic.”

Like many, the pandemic hit the school hard. Revenues dropped precipitously. Many students decided to wait out the pandemic over trying virtual classes. Physical classes went dark. Ensembles grew silent. Instructors’ lives were further limited with having no gig work to speak of. Smith says, “When students and teachers started coming back in person, there was a different kind of joy and appreciation for the personal connection that we have all taken for granted.”

And so, the magic continues. The expressions continue to be built with drumsticks in hand. The joys of self-discovery are happening with every lesson. There’s also, which Smith likes to remind people of, just the sheer joy of music-making. It’s all part of who Steve Smith is: a man excited about the next chapter in his life.

There will be actual chapters in his life. With the help of colleague Colin McLaurin, he’s nearly finished a book, taking the reader through the systems he’s developed for understanding rhythm and time as it applies to music and matter. The book is called Keys to the City. Kristy, his wife, has an album out soon. He plays drums on it. Entitled Family Album, the album was recorded at Shoreline’s famed Robert Lang Studios. Meanwhile, Seattle Drum School is striving for full capacity hosting as many bands, student showcases, art walks, touring artists, and clinicians as they can.

“My personal goal after 51 years of teaching thousands and thousands of private lessons is to teach a little less, and to practice, record, and play a lot more music.” His grandmother would be so pleased with her grandson now, what with all that a-drummin’ he’s done, does, and will continue to do.