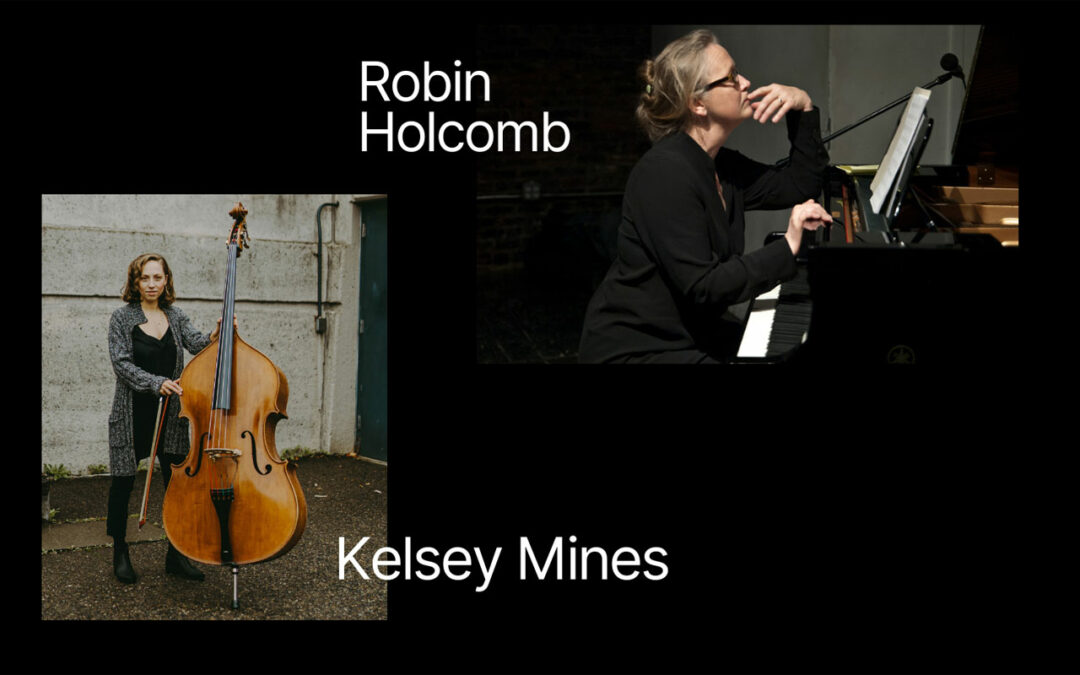 Robin Holcomb by Peter-Gannushkin and Kelsey Mines by Sydnie Couch

This evening features a rare, solo set from pianist, singer, and composer Robin Holcomb. Emerging from New York’s eclectic downtown scene in the 1980s, over the past four decades Holcomb has considered the full breadth of American music, forging jazz, folk, and modernist classical music into an unclassifiable style all her own. Equipped with a talent for thoughtful reharmonization, Holcomb is equally comfortable reimagining the parlor songs of Stephen Foster or the wry musings of consummate pop craftsman Randy Newman. Holcomb’s own songs juxtapose dissonant harmonies reminiscent of Charles Ives with spare Appalachian melodies, lent beauty by her fragile, plaintive singing voice. Like the poetry of her chief inspiration W.S. Merwin, Holcomb’s lyrics approach meaning from an oblique angle, eschewing rhyme to focus on elliptical imagery and terse evocations of the rural landscape. Long fascinated by the stranger aspects of the American experiment, Holcomb has composed song cycles inspired by the doomed Donner Party and 19th-century utopian communities, in addition to her more prosaic experiences working on a North Carolina tobacco farm. Since moving to Seattle in 1988, Holcomb has collaborated with the cream of the local crop both past and present, performing with Bill Frisell, Eyvind Kang, Danny Barnes, and the Westerlies, to name a few. Having spent the past few years focusing on longer-form orchestral compositions, on her new album One Way or Another, vol. 1, Holcomb reacquaints herself with song form. Working with her husband, producer Wayne Horvitz, Holcomb crafts direct, unadorned reinterpretations of songs from throughout her career, accompanied only by her own piano and voice.

In the years since returning to Seattle from graduate school at Arizona State University, bassist Kelsey Mines has immersed herself in the local scene, forming the free jazz trio Here to Play with drummer Gregg Keplinger and saxophonist Neil Welch, performing Afro-Cuban music as a member of Clave Gringa and Eléré, and experimenting with song form in the quartet EarthtoneSkytone. As a composer, Mines has used longer forms as a springboard to examine questions of equity and the complexities of social change. Commissioned for this year’s Earshot festival, Mines’ newest piece “Compost:People” contemplates the need to change humanity’s destructive treatment of our planet. Inspired by the writings of feminist theorist Donna Haraway and activist adrienne maree brown, with “Compost:People” Mines has conceived a work of musical speculative fiction. Written for an eight-piece chamber group, and accompanied by Ella Gomez (Seattle-based Art Director and ceramicist) and Colin Katagiri’s visuals, Mines creates the symbolic sonic embodiment of a transition away from environmentally catastrophic fossil fuels and petroleum products towards a healthy, regenerative relationship with nature. Joining Mines on bass are violist Aleida Gehrels, flutist Leanna Keith, trumpeters Walter Cano and Jun Iida, trombonist Beserat Tafesse, pianist Jona Brown, and drummer Greg Campbell.