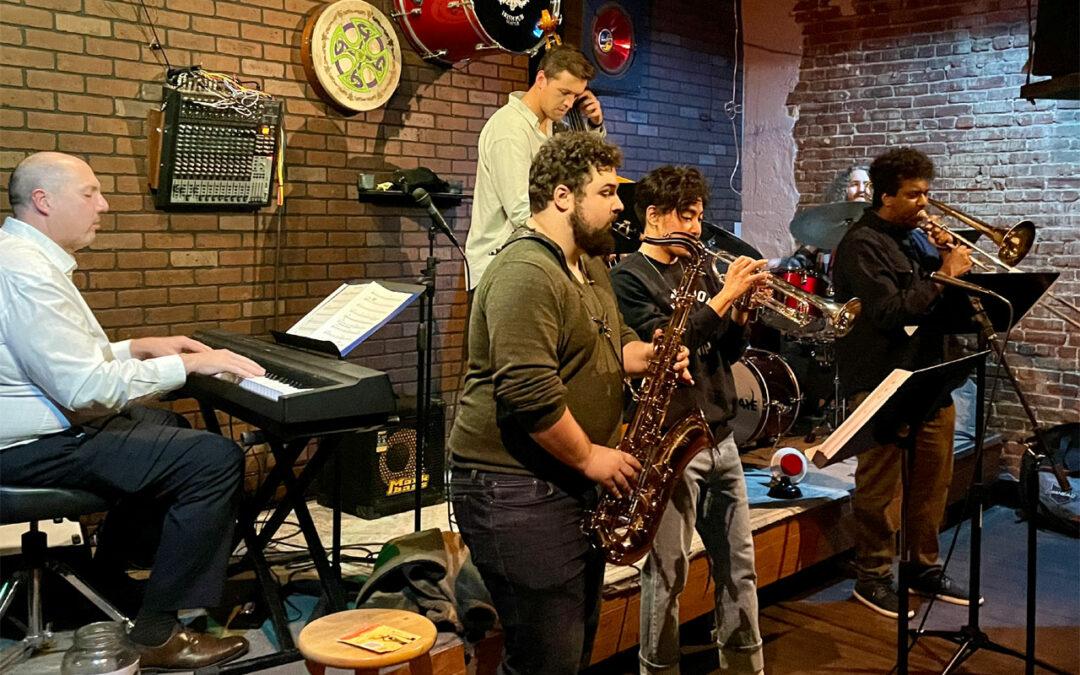 Community Corner is a series that invites the public to contribute their thoughts, reflections, observations, and more about the world around us, particularly as it relates to jazz and music overall. Earshot Jazz is dedicated to amplifying the voices and stories of artists and community members alike. The thoughts and opinions expressed in this series are the author’s own and do not necessarily reflect those of Earshot Jazz. Please email submissions to [email protected]

Eminent musicians will tell you that “jazz,” as a word, much less a self-contained musical genre, has foregone its use. Regardless of its outdated connotation, what strikes me about the art form is a widespread naivety pertaining to its basic elements. Even among those confessing a passing interest, jazz often proves illegible, striking listeners as a chaotic flurry of notes rather than a carefully orchestrated wonder.

A great way to learn about jazz is to attend a weekly jam session, where standards and solos often conform to certain foundational rules. Scour the nightly taverns of any American city and you’ll find a considerable number of these gatherings. One of Seattle’s finest resides in the basement of the historic Colman Building, where for the past 25 years some of the city’s top jazz artists have congregated weekly on the shallow wooden stage of the Owl ‘N Thistle Pub.

Each Tuesday, kicking off around 9:30, the Owl’s house band blazes through an opening set of standards. (“Standards,” prominent tunes transcribed in hardcopy collections, form jazz’s essential vernacular.) Then, in the second set, artists in the audience take the stage in spontaneous, unrehearsed groups, where they roll through additional standards in what’s commonly referred to as a “jam” set.

Eric Verlinde, the Owl’s current bandleader, told me that the session’s staying power derives from a history of top-notch talent. In the late nineties, several Berklee College of Music students relocated from Boston to Seattle and established a group called Bebop Instruction, which began gigging on the Owl’s small stage. Chops attracted chops, and a tradition was born.

Now, a quarter century later, the hosting musicians are Verlinde on keyboard, Thomas Marriott on trumpet, Paul Gabrielson on standup bass, and Max Holmberg on drums.

Sessions like the Owl’s tend to heed a classic format. In layman’s terms, a jazz standard is performed in four sections: head (in), soloing, “trading fours,” and head (out).

The head of a jazz song is quite simply the song itself, a preordained melody played over a preordained chordal structure. In the case of our Owl quartet, this melody will commonly be blown by the trumpeter, both because of the instrument’s upper register delivery and its nonchordal function (i.e., the trumpet can’t play chords beneath a piano solo).

After Marriott’s opening head, each member of the band takes instrumental solos over the entire body of the song. Solos can continue for multiple song repetitions, but – and here’s where the rules trickle in – improvised lines must follow a tune’s precise chordal anatomy. A soloist always plays to the end of the composition before passing their solo off.

After trumpet, piano, and bass solos, Holmberg’s drums take the spotlight. Drum solos often include a practice called “trading fours,” which means that every four bars, the solo passes between drums and another instrument. If we take twenty-four measures of “fours,” the active solo travels from the drums (measures 1-4) to the trumpet (5-8), back to the drums (9-12), to the piano (13-16), again to the drums (17-20), and then to the bass (21-24). Note that section lengths can vary. “Fours” can easily become “eights,” “sixteens,” or, much more frantically, “twos.”

After a few rounds of fours, the standard concludes with another repetition of the head.

The next time you turn on midday KNKX or cue up a Coltrane tune, recall this song structure. Listen for the head. Notice who’s soloing. See if the drums churn into “fours” with the other instruments. This knowledge could change the way you listen to jazz.

The end of 2022 was marked by staple restaurants and cherished clubs announcing closures; the Owl ‘N Thistle – which dates back to 1991, and the building itself to the 30s – is outliving the odds and welcoming new and old friends to its historic weekly jazz jam in the new year.

Though the session has evolved since its inception by a young group of characters a quarter century ago, it has always served as a musicians’ network and an anchor in Seattle’s jazz continuum. The small-but-mighty jam is nationally reputable and has hosted the likes of Branford Marsalis, Roy Hargrove, Nicholas Payton, Steve Coleman, and Benny Green over the years.

Come Tuesday, head to Pioneer Square’s lively Irish bar and proceed with openness to the intimate back bar. Here, you are invited to converse, commune, and listen: a living language is spoken here.